The last time I saw Ben Roethlisberger was about 10 days ago at the White House. He wore a suit that looked like it cost more than my entire collection of Members Only jackets. His hair was long and combed back like he was Pat Riley Jr. His tan was the color of deck stain. When he smiled -- and he did that a lot during the Pittsburgh Steelers' visit with Dubya -- you needed Ray-Bans to protect yourself from the glare. 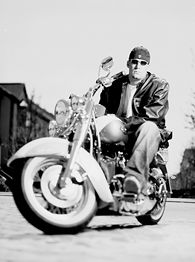 The dude was the happiest guy in America. He was there with his Super Bowl teammates, his friends, his extended family. As Roethlisberger stood about a curl pattern's distance from the West Wing entrance, someone asked the 24-year-old Steelers quarterback about the likelihood of a two-peat.

High-wattage smile, followed by, "That would be nice." Then Roethlisberger turned to his former halfback/people mover Jerome Bettis, who a year earlier he had tearily vowed to take to the Super Bowl if the vet returned for the 2005 season, and added, "Jerome, I'm done with promises."

I hope not. When Roethlisberger eventually recovers from the gruesome-looking motorcycle crash that left his face and Easy Rider image in pieces, I hope he'll make one more pledge: that if he absolutely has to ride what Suzuki describes as "the fastest production bike on the planet," he'll wear a helmet.

Anything works better than a baseball cap turned backward, a do-rag, a head of hair.

I've got nothing against motorcycles, other than the fact that they don't come with air bags, and accident cleanup crews usually pick up the machine remains with a pair of tweezers. Roethlisberger was riding a Hayabusa when he collided with a Chrysler New Yorker on Monday morning in Pittsburgh. You could have fit more than a few of the mangled cycle parts into a Happy Meal box.

Thank God, Roethlisberger didn't need a box and last rites. He has a broken jaw, a broken nose, fewer teeth, a reported 9-inch gash on his head and lacerations to his knees. But he's alive, which is the good news. The bad news is that once again a young athlete thought he was bulletproof.

Kellen Winslow Jr. ... Jay Williams ... Jeff Kent ... Aaron Rowand ... Dario Franchitti -- all were injured in motorcycle accidents. Winslow missed the entire 2005 NFL season. Williams, who was worried he might not walk again after his 2003 crash, is attempting an NBA comeback three years later. Franchitti broke his back and missed an Indy 500. Kent broke his wrist and missed MLB time. Same goes for Rowand, who broke ribs and a shoulder.

Motorcycle accidents aren't confined to athletes. And wearing a helmet wasn't going to prevent Williams from ripping apart his knee ligaments, damaging his nerves or fracturing his pelvis and a leg. But at what point are some athletes going to realize that looking cool on your 1299cc, four-stroke, four-cylinder, liquid-cooled, DOHC, 16-valve, TSCC ride doesn't mean a thing when you're flying bareheaded-first over your handlebars? How many more Roethlisbergers have to have their blood hosed down off the street?

Even Suzuki's own Web site implores its customers to "always wear a helmet, eye protection and protective clothing." Not to pick on poor Roethlisberger, but geezus, if he's going to wear a helmet when he plays football, you'd think he'd wear a helmet when he's tooling around town on a mini-rocket launcher. What's everybody worried about, helmet hair?

A wise man, speaking to an Associated Press reporter, once said this about athletes and motorcycles: "I told him before, that may not be something that you want to do in your career at this time. Any number of things can happen to you. I tell all these young guys who like to ride motorcycles that. A lot of them still do it, though."

The wise man was Williams' then-Chicago Bulls teammate Marcus Fizer. But Fizer's words hold as true in 2006 as they did in 2003. A triple-double, a grand slam, a Super Bowl ring doesn't guarantee you invincibility. It doesn't mean the laws of physics take the day off when your non-helmet-protected head slams into a car windshield or concrete surface.

Roethlisberger is lucky to be alive today. It doesn't matter who's to blame for Monday morning's collision between a 478-pound Suzuki and a nearly 3,600-pound Chrysler. And we'll let the agents and lawyers figure out those "personal injury" clauses in players' contracts. The important thing is that Roethlisberger is a statistic, but not a fatality.

According to Roethlisberger's agent, Leigh Steinberg, the Steelers' quarterback was scheduled to shoot a soup commercial with his stepmother, Brenda, and several Pittsburgh teammates. So much for that.

But maybe, when Roethlisberger recovers in seven or so weeks, he can film another kind of commercial, a public service announcement.

The message: Wear a helmet.