The starting lineups for the 77th MLB All-Star Game, otherwise known as the BosYork YankSox vs. the National League, will be announced Sunday. I don't know about you, but I'm dying to see if Yankees fans figured out a way to vote Melky Cabrera onto the roster.

Too bad the fans and, to a lesser extent, MLB, don't feel the same way. If they did, we wouldn't be stuck with the most flawed selection "process'' in all of sports. Who's in charge of this thing ... James Dolan?

Under the present -- cough, gag -- system, not only could fans vote at ballparks and retail outlets, but they also had until Thursday's 11:59 p.m. deadline to cast as many as 25 online ballots each for their favorite players. MLB even borrowed a phrase from old-time Chicago politics: "Vote Early, Vote Often.''

That's another thing. Votes have been coming in since late April, which means ballots were cast when most teams had played less than 30 regular season games. That's so early that not even the Kansas City Royals had been mathematically eliminated from the playoffs. And yet MLB treats those ballots the same as those coming in two months' later. That's Jessica Simpson dumb.

And about those ballots ... 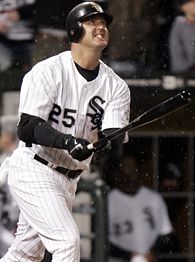 Where's Jim Thome? Remember him? Plays for the Chicago White Sox ... leads the American League in home runs (hit his 25th dinger Thursday) ... is among the AL leaders in runs, RBI, walks, slugging percentage, OPS (on-base + slugging percentage)? He's not even on the ballot.

He's a designated-hitter, you say. And because the July 11 All-Star Game is in Pittsburgh, a National League city, the DH isn't used. I understand. What I don't understand is why Boston's David Ortiz, who has played first base for the Red Sox exactly five more times than I have this season, has his name on the ballot?

Don't get me wrong: I'm not knocking Big Papi and his 70 RBI, but the guy is a DH, just like poor Thome. But Ortiz is all but guaranteed a place in the starting lineup, while Thome has to hope AL manager Ozzie Guillen can squeeze him onto the roster.

Anyway, the whole thing is more screwed up than FEMA's check-writing system. The ballot is imperfect. The voting starts way too early. It favors big markets, especially when you can vote 25 times online. And -- I don't know how to say this delicately -- a lot of fans are knuckleheads. They vote the straight party ticket: all Yankees, all Red Sox, all whoever.

I know -- all together now -- the game is for the fans. Sorry, it's the All-Star Game, not the All-Favorites Game. I want to see the best players, not necessarily the most popular.

Instead, going into the final day of balloting, Boston's Jason Varitek was the leading AL vote-getter at catcher over Minnesota's Joe Mauer. Mauer is hitting .392, which is only .140 points higher than Varitek's average (heading into Friday's games). Nothing against Varitek, but I'd rather watch the guy who might make a run at Teddy Ballgame's .406 batting average set in 1941. Varitek? Already saw him in "Fever Pitch.''

The Yankees' Robinson Cano over Chicago's Tadahito Iguchi or Seattle's Jose Lopez (the little-known Lopez had 56 RBI entering Thursday night's game)? Put it this way: If Lopez played in New York, the ballot numbers would be reversed.

The Los Angeles Angels' Vladimir Guerrero over Toronto's Vernon Wells? Not if I were picking the starters. And can someone explain why the NL balloting for outfielders has Junior Griffey (entering Friday's game: 16 HR, 46 RBI, 54 Hits, .263 BA) dangerously close to a starting spot, while Milwaukee's Carlos Lee (through Thursday: 25-64-85-.283) is only eighth and Colorado's Matt Holliday (entering Friday night: 15-54-105-.352) is a mind-boggling 15th?

Of course, the fans aren't the only ones who vote with their hearts rather than with their heads. I've been in big-league clubhouses when the players were filling out their ballots. You should have seen some of them. You'd think they were taking med school entrance exams. Some of them were clueless, so they picked All Stars based on reputation rather than performance.

This is why it's time for MLB commish Bud Selig to ditch the fans' votes, and maybe do the same with the players' ballots. Instead, let the managers and coaches in both leagues pick the starting lineups. Then let the All-Star Game managers complete the rosters.

The move wouldn't be unprecedented. Fans didn't cast votes until 1947, 14 years after the first All-Star Game was played. And when Cincinnati Reds fans stuffed the ballot boxes in 1957, and helped "elect'' seven Reds starters (and pushed Hank Aaron and Willie Mays out of the initial lineup), commissioner Ford Frick intervened. Fans couldn't vote again until 1970.

I'm not holding my breath. Even if I compromised and let the fan balloting help determine the reserve players, MLB wouldn't go for it.

"I think our view is, it's a game for the fans,'' said MLB senior vice president Richard Levin. "Overall, we think the fans do an excellent job.''

Sure they do. If you love the YankSox.