SOUTH BEND, Ind. -- Charlie Weis wasn't available. Vacation. The players? Not accessible until Aug. 6. And yet, you didn't need Mr. Buzzcut or anybody on the two-deep roster to tell you the differences between the Notre Dame football program of July 2005 and July 2006.

In one year so much has changed, except the expectations. That's why Bob Davie now works for ABC, why Tyrone Willingham works for the University of Washington, and why I'm mildly surprised Touchdown Jesus isn't sporting a crewcut. 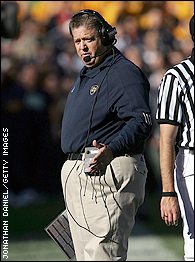 Weis is the reason for the ND football renaissance -- that, and the fact Willingham was a better recruiter than anybody wants to acknowledge. If it's possible to quantify an attitude, a confidence, then this program feels different. It is more sure of itself. It has its swagger back, which figures, since Weis could write the definition of the word in your Webster's.

A year ago the Irish were unranked and unnoticed. They were no-shows in every meaningful Top 25 preseason poll. If you looked hard in the agate you could find them under, "Others Receiving Votes." But that was it. Notre Dame was reduced to mercy votes.

Now the Irish will be ranked in the top five, easy. And if they aren't, you have my permission to wet-towel snap the butts of any voters who stuck them lower.

A year ago the South Bend Marriott required a two-night minimum stay during a Notre Dame football weekend. I know, because my company credit card was billed $299 per night.

Now for the Sept. 9 home opener against Penn State the Marriott is requiring a three-night minimum for -- are you sitting down? -- $649 (plus tax) per night. By the way, the 298-room hotel is sold out. The Marriott loves Weis.

A year ago there were Ty Guys and Weis Guys. It wasn't necessarily a campus divided over the clumsy methods used to dispose of Willingham, but there were still some hairline fractures in the university community. And did I mention that some of Notre Dame's heavyweight names (Joe Montana, among others) had endorsed the coaching candidacy of former Notre Dame captain Tom Clements.

Now there is closure, or close to it. At the very least, the cast is off. And Weis Guys? They're everywhere. For $18 you can buy a "Charlie & The Weis Guys" T-shirt in the Notre Dame bookstore, or a "Charlie's Army," or "Charlie's Angels" T-shirts online.

A year ago the casual football fan thought Samardzija was the bottom line of an eye chart. Jeff Samardzija was a backup junior wide receiver with a grand total of zero career touchdown catches.

Now he is a returning consensus All-America, thanks to a 77-catch, 15-touchdown 2005. His No. 83 replica jersey is available in the bookstore for $50.

A year ago quarterback Brady Quinn was on absolutely nobody's short (or long) list of Heisman Trophy candidates.

Now Quinn, the leading returning Heisman vote-getter, is on the cover of just about every preseason football magazine in existence. And, yeah, $50 gets you a No. 10 replica jersey in the bookstore.

A year ago NBC had to put a happy face on Notre Dame's so-so 2.5 ratings numbers during the 2004 broadcasts.

Now the network, which is beginning the first of another five-year deal with Notre Dame, needs a drool towel after the Irish averaged 3.6 ratings in 2005, a 44 percent increase from the previous season.

A year ago you didn't know much about Weis' son, Charlie Jr., or his daughter, Hannah. 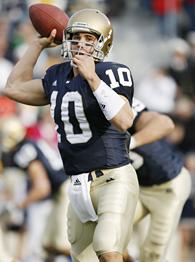 Now Charlie Jr., a constant on the ND sideline, is fresh from watching the MLB All-Star Game with his old man. In fact, the kid threw out the first pitch at Wrigley Field earlier this summer. And Hannah? The little sweetie is the centerpiece of Hannah & Friends, Weis' nonprofit charitable foundation that benefits children and young adults with autism and developmental disorders. You can buy Hannah & Friends wristbands. You can cowboy up $1,000 for a seat at the July 24 Notre Dame Coaches' Kickoff For Charity dinner at the Waldorf-Astoria Hotel in New York. Your hosts: Weis, Lou Holtz and Ara Parseghian. Or you can buy a "Charlie Jr.'s Army Reserve" T-shirt (before you shriek, remember that 100 percent of the proceeds go to Hannah & Friends).

A year ago $5.2 million in refunds were distributed to those applicants who weren't able to get tickets in Notre Dame's annual ticket lottery. The lottery is available to ND monogram winners, undergraduate parents, contributing alumni and benefactors.

Now the school's ticket office is preparing to distribute more than $11.7 million in refunds. A staggering 66,670 requests -- the highest in Notre Dame ticket lottery history -- were made for the 30,000 or so tickets available for the Penn State game. The second-highest number of requests (61,631) was made for the Sept. 16 Michigan game. And the Nov. 25 game at USC drew 33,251 requests for only 15,000 tickets, which makes it the most requested road game in ND's lottery history.

A year ago only one pep rally was held at Notre Dame Stadium. The rest were held in the usual (and smaller) venue, the Joyce Center.

Now there's an outside shot of having the Penn State and Michigan pep rallies at the stadium.

A year ago nobody knew if Weis could recruit elite high school players.

Now they know. Notre Dame's 2006 recruiting class is ranked in the top 10 by most recruiting services. And the 2007 class features quarterback Jimmy Clausen, who is considered the No. 1 recruit in the country.

A year ago Notre Dame had zero early enrollees.

Now it has three, and Clausen says he wants to report early in January.

A year ago Notre Dame didn't have a single player chosen in the first round of the NFL draft.

Now, barring injuries, Mel Kiper thinks the Irish could have as many as five.

A year ago Weis was preparing for the first season of a six-year contract.

Now he's beginning the first of a 10-year contract extension worth an estimated $30 million-$40 million, which would make him college football's highest-paid coach.

A year ago Weis was featured prominently on the Notre Dame media guide.

Now you need Lasik surgery to find him on the cover of the 2006 guide. Weis wants TEAM emphasized, not some guy wearing headphones.

A year ago Weis didn't have a single commercial endorsement.

Now, by choice, he still doesn't, though there is talk of a book deal.

A year ago Notre Dame was coming off a 6-6 season, had a rookie head coach, was picked to maybe win as many as seven games, and possibly receive a Gator Bowl bid.

Now, after a 9-3 season, a BCS Fiesta Bowl appearance, another Weis-produced spring practice, and the return of the entire coaching staff and 36 lettermen (16 starters, 19 seniors), the 2006 predictions almost always include talk of a national championship run.

That's nice. But talk is cheap, much less expensive than those replica Samardzija jerseys. Willingham finished 5-7 the year following his 10-3 debut season at Notre Dame. He was whisk-broomed away at the end of 2004.

A year ago nobody had a real clue about the Weis Era.

Now we do. That's why the expectations, as constant as the gold on Notre Dame's helmets, don't seem so oversized.