LAS VEGAS -- And now, a recap of Thursday's backstabbing episodes and ugly ego clashes at the daily soap opera that is the USA Senior National Team's training camp:

Well, uh, let's see. Oh, yeah: Shane Battier checked on Michael Redd after the Milwaukee Bucks star nearly collided with reporters while trying to save a ball from going out of bounds on the baseline.

"Watch your ankle," said Battier. Then he smiled, patted Redd on the back, and they jogged back to the defensive drill. So, you know, that was pretty intense.

And then, after the morning practice, I saw the USA's two Alpha players, Dwyane Wade and LeBron James, have a huge confrontation. James was conducting an interview session at courtside, and that's when Wade whipped a ball of rolled-up athletic tape at the King. Actually, now that I think about it, he sort of soft-tossed it. And James glanced over and started laughing. 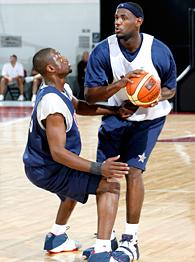 But a few minutes later, they did almost beat the crap out of each other. At least, that's what I'm telling the guys back at my weekly anger management meeting. What really happened is this: James got done with his interview and yelled to one of the team trainers, "Hey, I need five bags of ice!" And then Wade said, "That's because you're 30." And then he added something about wanting to check James' birth certificate because, you see, LeBron looks really old for his age and

Ah, forget it. This training camp bites. The only thing missing is a group hug and a bake sale. And will someone wipe that smile off Team USA coach Mike Krzyzewski's face?

"I hope you can feel their spirit," he said. "Can you? They like one another."

Yeah, I'll give them that. Even though training camp didn't start until Tuesday night's team dinner, the 20 players participating in these two-a-day practices do seem to get along. Of course, it's early and Krzyzewski doesn't have to whittle his roster down just yet. But even when the actual 12-man roster is set for next month's World Championships, I wouldn't count on anybody going Shea Hillenbrand if he's not invited to Japan.

But according to James and Wade, this feels different than the hurried and, in retrospect, oddly configured '04 team coached by Larry Brown. The extra preparation time helps. So does the absence of Brown, who doesn't have a history of embracing young players (James averaged just 11.4 minutes per game under Brown, Wade 17.5). So does the presence of veterans such as Billups and Elton Brand.

Said Wade: "There's no reason to be jealous. On this team we can all shine."

What they won't say -- but others will -- is that Wade and James are partly responsible for the different environment here at the '06 camp. With due respect to Dirk Nowitzki and Team USA no-show Kobe Bryant, Wade and James are the NBA. Wade is coming off an NBA championship. James is fresh from leading the Cleveland Cavaliers to their first playoff appearance in eight years.

And yet, they big-time nobody. They are among the Team USA leaders in sweat dripped. And if Krzyzewski decides to vote on a team captain, here's guessing Wade or James would earn the honor.

"In their own right, they are super-duper stars," says Chauncey Billups, becoming the first-ever Team USA player to use the words "super-duper." "They're carrying this league and doing some unbelievable things. But when you bring them in this setting with a lot of other great players they just fit right in. They're down for the cause. And that's the reason why I think this team is going to be great."

Or as Battier, who has made a career of being the ultimate team player, puts it: "That's what makes the superstars superstars."

There are a lot of reasons to like this USA roster, beginning with the obvious: talent. But equally important are the subtleties of it.

For example, Billups is here for the first week of training camp, even though he has absolutely no chance of making the World Championships roster. That's because months ago, before he knew he was going to be named to the roster, Billups promised his wife that he'd spend more time with his young family during the offseason.

"I can't break that promise," he said.

But he did get permission to work his butt off for a week's worth of Team USA training camp. "At least I can do a little something," he said.

Gilbert Arenas was so geeked about this team that he paid his own way to get here 3½ days before camp opened. Battier, a former ball boy and go-fer for the Detroit Pistons, would still serve Gatorade to the fellas if you asked him. Bruce Bowen plays as if someone threatened him with a pay cut to minimum wage. And on and on it goes.

But Wade and James are the centerpieces of this team, though good luck getting them to admit it. They're so young, and yet so respected. That doesn't happen by accident.

"They get it," said Krzyzewski.

Pause for emphasis. "They get it."

Pause for more emphasis. "They get it."

Krzyzewski can be a gusher sometimes, but you had to see his eyes and hear the sincerity in his voice to know he was paying Wade and James one of his Tier 1 compliments.

As the interview sessions ended, Wade mentioned the 1992 Dream Team, which overwhelmed opponents on its way to a gold medal (Krzyzewski was an assistant on that team) at Barcelona. "I don't think you can remember who was the leading scorer on that team," Wade said.

He's right. It was Charles Barkley, not Michael Jordan.

This is scary. Wade -- history professor. Maybe it's time to check his birth certificate.