HOOVER, Ala. -- Your calendar says the 2006 college football season starts Aug. 31. Mine says it officially began here Wednesday at 12:47 p.m., when grown women clutching footballs and Sharpies climbed over tables, chairs -- even sports-talk radio personnel -- in a crazed attempt to nearly gang tackle Alabama coach Mike Shula as he tried to make his way to the second floor of the Wynfrey Hotel.

Gawd, I love the living, breathing freak show that is the SEC Football Media Days.

You don't attend the SEC's 52-hour football overdose as much as you try to survive it. No place in the world has more Urkels per square foot than the lobby of the Wynfrey during the league's annual kickoff sessions. The place is more crowded than a Wal-Mart the day after Thanksgiving. 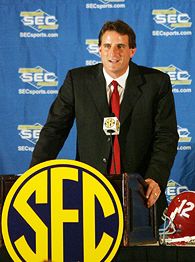 Poor Shula, a pleasant man whose body language in public settings screams, "I will give you my courtesy car and half of my annuity package if you come no closer," had to duck down a hallway and into a private elevator so he could escape the chair-hurdling females, whose Southern accents were as thick as pom-pons. Only Bama women can stretch the word, "Coach," into nine syrupy syllables.

One of the women got his autograph, thanks to a bull rush around the corner and then over a radio guy sitting at a table. Too bad Bama doesn't need help on the D-line. Also in the crowd was a guy holding a stack of houndstooth hats (can't they let the Bear rest in peace?), a codger wearing shin-high Crimson socks and shorts (pause for fashion scream), and assorted people wearing T-shirts that generally made fun of Tennessee coach Phillip Fulmer.

Shula, his nervous grin in place, did another radio interview and then disappeared. By taking the elevator upstairs to the main interview room on the second floor, Shula missed the media greeting party waiting for him at the nearby escalator: 18 TV cameramen, three photographers and a few goobers like myself who wanted to see if the fourth-year Bama coach would be overwhelmed by the attention and ask for his blanky and a glass of warm buttermilk.

I'll admit it: I usually build my summer around the SEC Media Days. It's the preseason football equivalent of Mardi Gras. It's Tommy Lee kooky. It's off-the-charts excessive. And you know what? I dig it. It turns me on. Yeah, it turns me on. Because you know what the kicker is? Maybe I'm a little crazy. That's right, maybe Geno is a little nuts.

Of course, I'm not alone. There are more than 600 credentialed media members here, which is more credentials than the league issues for its championship game. If you add the credentials given to the conference's corporate and bowl partners, the number reaches 740. Now you know why Shula stammered his way through his SEC Media Days debut in 2003. Or why conference commissioner Mike Slive, also a rookie in 2002, took one look at the massive media crowd and almost required medical assistance.

"I walked in here and I'll tell you, I could hardly breathe," says Slive, who came to the SEC from Conference USA. "I have very little recollection."

Slive opens a manilla folder to reveal his itinerary for the afternoon: State of the SEC address, followed by nine separate interview sessions. And this is the easy day. Thursday he does Radio Row.

Radio Row, where Shula waded into, is a corridor just off the hotel lobby that this year features 21 different live sports talk broadcasts. I just came from the ACC's media days. A grand total of two radio stations were there. You could hear crickets chirp. Or Virginia's Al Groh.

Every major conference has football media days. And it usually works like this: Each coach launches into a painful monologue detailing his three-deep depth chart, and then answers such detailed questions as, "When your tight end blocks down on the strongside backer, who seals the cornerback when he forces on run support?"

In the business, we call those, "Ivan Maisel-ers."

The SEC has its share of X-and-O questions, as well as the dreaded, "Can you talk about [insert topic, because I'm incapable of actually framing a question of my own]?" But only the SEC hires a team of three professional stenotypists to provide transcripts of every session. The Big Ten Conference manages with two.

Only the SEC Media Days has featured Nick Saban's massive dog darting around the Wynfrey's second floor after the pooch somehow escaped from the then-LSU coach's hotel room.

Only the SEC Media Days has had Steve Spurrier criticize the BCS -- with then-SEC commissioner and BCS godfather Roy Kramer standing at the back of the room with a pasted grin on his face. Spurrier would see Kramer, acknowledge the commish, and then continue his critique of the non-playoff system.

This is the place where reporters and SEC players once gathered for a Miss Hawaiian Tropics regional beauty contest the night before the Media Days started. One writer tossed his room key at the high-heeled feet of one knockout (fat chance). Meanwhile, Memphis Commercial Appeal writer Ron Higgins listened in amazement as an SEC star player dismissed one of the tanned stunners because, as the All-American told his wingman, she had "bad teeth." The wingman's reply: "You looking at her teeth?"

The Big 12 Conference Media Days has Burnt Orange and Mack Brown. The SEC has Big Orange and Fulmer, who two years ago refused to attend the sessions in suburban Birmingham because he didn't want to get served with a subpoena. So Fulmer did his interviews via teleconference squawk box from the safety of Knoxville. Slive fined Tennessee.

This is the event where some players (two from each of the SEC's 12 teams are invited) actually design and coordinate their own outfits, as if it were the NFL draft. This is where a radio reporter once asked then-Auburn coach Pat Dye a question, but did it in a drop-dead impersonation of then-Tennessee coach Johnny Majors. Dye freaked. This is where a taxi driver once pulled a gun on a visiting SEC writer.

Only here can Spurrier play in the Media Days golf tournament -- and chide an Alabama writer for something he wrote a season earlier. Only here can you drive down to Tuscaloosa for the original Dreamland Barbecue. Only here is football a way of life.

And Slive's staff already has prepared the interview schedule for 2007. Is it too early to request a credential?