The 2006-07 NCAA Division I Manual is 460 pages of indexes, by-laws and exasperation. The thing is thick enough to crush a Chihuahua and, sometimes, your spirit.

I tried reading it. Once. Then my head exploded and people had to spoon-feed me apple sauce for a month. Legal scholars could study it for years and their final response would be, "Huh?" 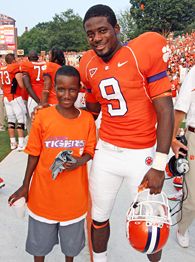 But something wonderful happened earlier this week. And believe it or not, it involved that much-too-complicated Manual and the supposedly inflexible people who enforce it at the NCAA's headquarters in Indianapolis.

Ray Ray McElrathbey is a redshirt freshman cornerback at Clemson. His beard is more tennis ball peach fuzz than stubble. Razor blades yawn when they see him.

McElrathbey ought to be thinking about classes, football and sorority girls -- in that order. Instead, he's 19 going on parent.

So, in review: mom and drugs, dad and gambling. This isn't exactly how you draw it up in parenting books, which is why Ray Ray now has temporary custody of his 11-year-old brother Fahmarr.

Do you remember when you were in your second year of college? Here's guessing you weren't playing Division I football, trying to make grades, and taking care of your little brother in an off-campus apartment. You weren't stiff-arming foster homes and what Ray Ray calls "the system." And your mornings probably didn't begin at 6:30, when you got your little brother up for breakfast and school.

So welcome to Ray Ray's life, which until this past Monday, meant he and Fahmarr were completely on their own. Of course, Monday is when the NCAA added an extra page to the Manual, one that included space for a heart.

In NCAA-ese, the Administrative Review Subcommittee agreed to waive a rule prohibiting extra benefits for Ray Ray. In this case, an extra benefit might have been something as innocent, but as vital, as having a Clemson assistant football coach's wife pick up Fahmarr from school and bring him to the Tigers' football complex. It might have been something as kind (but, in the NCAA's eyes, illegal) as a Clemson ticket holder giving Fahmarr a decent winter jacket.

But that was before Clemson submitted its ARS request Sept. 5. About two days later, the NCAA approved the request. Ray Ray and Fahmarr got the news Monday. Smiles arrived nanoseconds later.

"In my 20 years with the NCAA I have never seen a request like that," said Kevin Lennon, NCAA vice president of Membership Services.

Lennon was in a Washington, D.C., hotel lobby when I talked to him Wednesday. You could hear a piano being played in the background. He was there on business, but it was clear his mind was on the good deed done by the NCAA.

"We just wish him the very best of luck," Lennon said.

The NCAA gets pounded, often with good reason, for its cumbersome ways. But Lennon wants everyone to know that more than 1,000 ARS requests are submitted each year, "and the majority of those are granted," he said.

Clemson also was in the back-patting business Wednesday.

"They've done nothing but be supportive and act quickly," Clemson assistant athletic director Tim Bourret said of the NCAA. "They need to get their props, they really do."

Everybody does. Before the the waiver was approved, Ray Ray did all the heavy lifting with Fahmarr. Everywhere Ray Ray went during the summer on his little motor scooter, so did Fahmarr. And once classes started -- for both of them -- Ray Ray's teammates helped any way they legally could. That's why Gaines Adams, a preseason All-America defensive end, was knocking on the apartment door one morning at 7:30 to take Fahmarr to school. Or why Chansi Stuckey, a first-team All-ACC wide receiver, also pulled chauffeur duty on occasions.

"There are seniors helping out a freshman," Bourret said.

It didn't stop there. Clemson students would see Ray Ray and offer to babysit. That's what happened last weekend when Ray Ray and the Tigers were playing at Boston College. Now, thanks to the NCAA decision, Fahmarr can stay at the house of a Clemson assistant coach or administrator when the Tigers leave for Florida State later this week. Clemson athletic department officials and their families also are allowed to provide transportation for Fahmarr.

The situation is better, much better, but the sobering fact remains that Ray Ray is raising his own brother. Bourret listens to some of the interviews Ray Ray does with reporters, "and I don't understand how he doesn't start crying."

It is a heartbreaking set of circumstances made just a tiny bit easier because Clemson cares, his teammates care, his fellow students care, the NCAA cares, and, as it turns out, college football fans care. There have been hundreds of phone calls to the Clemson athletic department asking the same question: How can I help?

The answer: You can, just give them a few days.

A trust fund, to be administered by a local Clemson bank, is being established to help the Brothers McElrathbey. An announcement detailing where to send any contributions should be available on ClemsonTigers.com early next week. In the meantime, don't be afraid to crack open the checkbook. Think of it as the extra benefit that keeps giving.

Meanwhile, nobody will likely write the NCAA a thank-you note. Check that. After listening to Bourret rave about the Tigers' leading special teams tackler, Lennon shouldn't be surprised to get something soon in the mail with a Clemson, S.C., postmark.

It will be the one with the Ray Ray and Fahmarr signatures.