On Halloween night -- the same evening the NBA season began -- Keith Van Horn wore a costume that still causes some team executives and fellow players to do double takes. 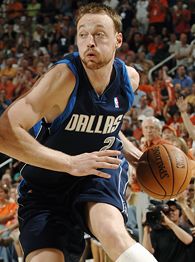 Van Horn went dressed as a husband and father.

At the very least, the outfit will end up costing Van Horn about $5 million, which is about how much he would have received as a midlevel salary exception on somebody's roster this year. Then there's his Nike endorsement deal. Right now, you can find Van Horn's action photo on the company's Web site, complete with his preference of kicks (that's shoes, for the hoops impaired). Next week, who knows whether he and his Air Uptempo Pros will still be featured.

That's because Van Horn, the No. 2 selection in the 1997 NBA draft, isn't playing this season -- not because he's injured or because, like numb-above-the-neck Latrell Sprewell, he can't support a household on a multimillion-dollar salary. Nope. Van Horn is sitting out the year because he wants to spend time with his family.

Of course, good luck trying to get him to talk about it. Van Horn is laying lower than the bent grass greens at Augusta National. So is his agent, David Falk.

Meanwhile, the rest of the league doesn't know whether to applaud or request that Van Horn undergo a CAT scan.

"I think there's probably a little bit of both," Denver Nuggets coach George Karl said. "I'm sure there's some players saying, 'Wow, why would he want to turn down that money?' "

Ah, money. You know how pro athletes always say it isn't about the money ... but it always is? In Van Horn's case, it really isn't about the cash. If it were, he'd probably be in a Nuggets uniform when Karl's team opens its season at the Staples Center on Thursday night against the Los Angeles Clippers. And home games wouldn't have been a problem; Van Horn lives in a pricey foothills neighborhood just west of the Denver skyline.

The Boston Celtics also were interested, so he could have made his season debut Wednesday at the TD Banknorth Garden. Had he signed a free-agent deal with the Celtics, Van Horn would have become the team's resident historian of the Atlantic Division. The guy has spent more time on the Eastern seaboard than Tony Soprano.

In all, Van Horn has played nine seasons, and for five teams in the past four years. Twice he was traded during the season, from the Knicks to the Milwaukee Bucks and from the Bucks to the Dallas Mavericks. He found out about the Knicks-Bucks trade as he was taking one of his daughters to Walt Disney World for a birthday party with Cinderella.

As always, the money was mind-boggling (his $15.7 million salary made him the highest-paid Maverick last season), but so was the realization that he and his family would have to start all over again this fall.

Break the news to his wife, Amy. Sell the old house. Rent a new house. Find new baby sitters. Find new schools. Try to explain one more time why Daddy is making you leave your friends. Leave them at their most vulnerable moment so you can catch up with the team in Sacramento.

"I don't think there's any question we cheat our family and our kids," said Karl, who will miss son Kobe's senior night at Boise State this season because of a Nuggets scheduling conflict. "There's no way you can give quantity to your kids."