Here's what Al Davis might be thinking Sunday as he sits in his luxury box at McAfee Coliseum and watches the Denver Broncos, still coached by the man he stupidly fired 17 seasons ago, do a river dance on his spectacularly bad Oakland Raiders. 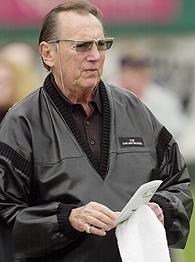 "You know, these are really good chicken tenders."

Something has happened to Davis' once-feared, once-respected Raiders organization. It not only has lost its way but has lost its soul, its identity. Anybody who knows football knows that's even worse than losing games.

The lasting Raiders images are now of a 77-year-old man sitting stoically behind a pane of luxury suite glass as his franchise, the one he built from table scraps five decades ago, evaporates into irrelevancy. Davis' team is so unfathomably unwatchable you almost wish the NFL would consider giving it a bye week every week.

Did you see Monday night's loss against the Seattle Seahawks? The Raiders were so dreadful that ESPN actually considered changing its MNF slogan to, "Is it Tuesday yet?" That's how badly you wanted it to end.

Hey, it wasn't ESPN's fault the Raiders' offensive linemen were never introduced to a blocking sled. Quarterback Andrew Walter got sacked so many times (nine) that he wanted to call fair catches on shotgun snaps. He spent more time on the turf than the yard markers did.

Meanwhile, poor Mike Tirico, Tony Kornheiser and Joe Theismann did everything but sing show tunes. As the Raiders' ineptness reached new lows, the fellas in the booth took turns welcoming Christian Slater, Brian Bosworth and Michael Wilbon to the broadcast. Had the game lasted much longer, you might have seen Martha Stewart up there teaching the boys how to make a delightful dinner-table centerpiece out of used ankle tape.

Without question, the 2-6 Raiders are the worst team in the NFL. The Arizona Cardinals have a worse record, but they also have an excuse: They're the Cardinals. They're supposed to be in last place.

Not the Raiders. You can't double-click an icon on their team Web site without being subjected to another self-congratulatory reminder about their past. They love telling everybody they have the best winning percentage in pro football since 1963.

That's great. But since losing to Tampa Bay (led by former Raiders coach Jon Gruden) in the 2002 Super Bowl, the Raiders have won just 15 of their past 56 games. That's a .268 winning percentage.

I'm only half joking when I say Ohio State, USC or Texas could challenge the Raiders for at least a half. And after watching them stumble around in the rain against the Seahawks, I'm not positive the "Friday Night Lights" high school team couldn't cause some matchup problems.

The Raiders are last in the NFL in total yards per game, scoring, passing yards per game and passing touchdowns, and are next to last in rushing touchdowns and the all-important turnover ratio. They've scored an offensive TD in only three of their eight games. So dull is the Raiders' offense that management is considering a daring new promotion: Score a TD, get a Raiderette.