LOS ANGELES -- So, USC or Michigan?

That's the only real question left to answer in a season where a national championship matchup will be determined by -- and how stupid is this? -- "style" points.

I hate the BCS. I hate it because the two best teams in the country aren't going to play in the national title game. Instead, No. 1-ranked Ohio State is going to face a very good, but moderately flawed USC team.

If it were up to me -- and a slightly less-flawed Michigan team -- the BCS would be swimming with the fishes. It would be ruled unconstitutional. If you uttered its initials, you would be required to eat a very large bowl of FieldTurf.

So while the rest of the NCAA's Division I-AA, II and III qualifiers are in varying stages of 16-, 24- and 32-team football playoffs, we're stuck with BCS computer standings, mathematical formulas and a "system" so screwed up that it sees a therapist twice a week. It ought to be called the FAC (Flip A Coin).

That's what happened when the assorted (and occasional clueless) coaches and Harris Poll members sat down to fill out their top 25 ballots late Saturday evening and Sunday morning. They had to choose between 10-1 USC, which beat overrated Notre Dame, 44-24, Saturday night at the Coliseum, or 11-1 Michigan, which defeated the same Irish team by 26 points more than two months ago at South Bend. 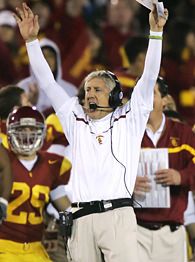 The Trojans still have to beat UCLA at the Rose Bowl next Saturday, but if they do, the general consensus is that they'll be in Glendale, Ariz., for the Jan. 8 national championship. There are worse things that could happen, such as Florida somehow squirming its way into the title mix. And nobody outside the greater Gainesville area wants that, do they?

No, it's going to come down to USC or Michigan -- and splitting strands of hair.

Is USC's 20-point win against the Irish at home better than the Wolverines' 26-point win on the road?

There are no right or wrong answers to any of these questions. That's the curse of the BCS. It takes subjectivity to a disturbing new level.

I think Michigan is the second-best team in the country. You might think USC is the team best equipped to play undefeated Ohio State. If you do, I've got no problem with your choice. The differences between the Trojans and the Wolverines are as thin as the drawstrings on the Bill Belichick-like sweatshirt Notre Dame coach Charlie Weis wore on the Coliseum sidelines.

Of course, you're not going to get much out of Weis when it comes to choosing between USC and Michigan. When I asked him if USC was the best team the Irish faced this season, Weis launched into a seemingly prepared script.

"It's too dangerous of territory for me to tread," he said, "so I'm going to avoid that one."

"I don't really care," said Irish safety Tom Zbikowski, when asked to choose between USC and Michigan. "I don't have an opinion."

And this from ND cornerback Mike Richardson: "I'm not really inclined to say anything about that."

Were the Irish under Weis' orders not to discuss any compare-and-contrast scenarios between the two teams?

A small pause. "We're not supposed to," said Richardson. 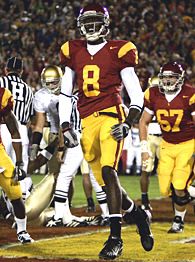 The Trojans weren't as shy. Wide receiver Dwayne Jarrett, who would have been a no-brainer Heisman finalist if he hadn't struggled with injuries earlier this season, said USC deserved a place in the championship game if it beat UCLA.

"Oh, yeah, definitely," said Jarrett, who was virtually uncoverable during a seven-catch, 132-yard, three-touchdown night. "We believe we're up there with the best of the best."

"I think that's the matchup everybody wants to see," said Trojans tailback Desmond Reed. "Big-time talent. Big-time matchups across the field. If I was a fan, I'd pay to see it."

Even USC coach Pete Carroll, who usually blows off all the BCS-scenario talk, was (for him) in campaign mode.

"We played a heckuva schedule," he said. "We'll play anybody anywhere, and I think we'll be hard to beat."

Actually, I think Ohio State will be hard to beat. If Oregon State can solve the Trojans, so can the Buckeyes. And if Ohio State can beat Michigan once, it can beat it twice, even on a neutral field.

Hey, here's a thought: wouldn't it be neat to see the Wolverines play the Trojans in, ta-da, an actual playoff game? You know, just like the rest of the NCAA? Then we wouldn't have to endure the Michigan-or-USC microanalysis.

To quote the wise Desmond Reed, I'd pay to see that.