If you're Michigan coach Lloyd Carr, how do you explain to your players that they won't be in the BCS Championship Game? How do you tell the second-best team in the country to get pumped about playing USC in the Runner-Up Bowl? How do you resist the urge of wishing Nutcracker drills on every person who jumped one-loss Florida ahead of the one-loss Wolverines in the final polls? 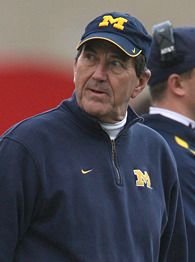 There is no polite way of saying it: Michigan got jobbed. Sunday's rankings are Exhibits A-Z why the BCS means well, but simply doesn't work -- and never will.

Carr had to do what Auburn's Tommy Tuberville did two seasons ago. Tuberville's team finished the regular season 12-0, but was left out of the Tostitos BCS Championship Game in favor of undefeated USC and Oklahoma.

"It's hard," Tuberville said. "It's hard to look them in the eye. Heck, we're still not over it. You never get over it. It's like a question that's never been answered."

Carr is asking those same questions. And he'll get the same shoulder shrugs that Tuberville got.

Let me get this straight: Michigan, which was unbeaten against all teams on its schedule ranked lower than No. 1, isn't going to Glendale, Ariz., for the Jan. 8 national title game because

• It didn't win its conference.

No, it didn't. But did you see who did? Team by the name of Ohio State. Maybe you've heard of the Buckeyes? Undefeated. Ranked first in the country. Beat Michigan in Columbus by the grand total of three whole points.

And feel free to show me in the BCS handbook where it says you've got to win your conference to play in the championship game.

• Nobody wants to see a rematch.

Just asking, but how did Ali-Frazier II and III work out? Or that Georgetown-Villanova Final Four?

I know Florida's Urban Meyer doesn't want to see a rematch, but he's not exactly an impartial observer, is he? And if Meyer were in Carr's Nikes, I guarantee you his objections to a second Ohio State-Michigan game would have disappeared.

A rematch, this time on a neutral field, would have been a game for the ages. And if you threatened to take away his precious sweater-vest if he didn't tell the truth, I bet you Buckeyes coach Jim Tressel would rather play Florida than have to face the Wolverines again (Tressel declined to vote in the final coaches' poll).

You want to give the Gators the edge based on scheduling? Fair enough, though you could argue that Florida didn't exactly beat vintage Alabama, Georgia and Florida State teams this year, and Central Florida and Division I-AA Western Carolina were dreadful.

And look at the one loss each suffered by Florida and Michigan on their schedules. You tell me which defeat was more impressive: the Gators' 10-point road loss to an Auburn team that finished the season No. 9 in the BCS standings? Or the Wolverines' three-point road loss to an Ohio State team now favored to win the national championship?