WHEELING, Ill. -- It was only a few nights ago, in a dimly lit, cinder-block high school gym packed tighter than sushi rolls, that I swear I witnessed the next Jordan in action.

Wait, make that two next Jordans. That's how sure I am.

One was a sophomore, the other a senior. They wore blue-and-white Jordan shoes -- everybody did on the Loyola Academy team -- and looked just like MJ himself, except for the part where they both shot left-handed, never even attempted a dunk and spent large chunks of the holiday tournament win against the Streamwood Sabres with their butts soldered to the bench. One of them even wore prescription glasses.

But that's OK. They're more Jordan-like than Kobe, LeBron, D-Wade or the other pretenders. Watching these two was like being magically whisked away on the Michael time machine. 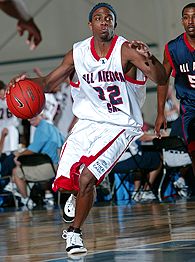 Of course, the next Jordans make Laney High School MJ of 1981 look like a No. 2 pencil. Their arms are so muscled that they need building permits for their biceps. Their shoulders are as wide as two bleachers seats, and their legs have that lean, athletic look that says, "I can run till you drop."

I remember exactly when I knew they were the Air apparents. It was when the public address announcer at the 29th Annual Hardwood Classic leaned toward the microphone and said, "At guard  No. 32  Jeffffffffff Jordan."

Hold on -- 32? As in the reverse of 23, MJ's number? As in Michael Jeffrey Jordan? Yeah, he was a Jordan, all right. So was the younger Marcus, who, even with the sports glasses, had the basketball look of his old man.

Speaking of the old man, His Airness was at the game. He slipped in about 10 minutes before tip-off and was seated against the bleacher rail just behind and to the right of the Loyola bench, his three-person security detail shooing away well-wishers, gawkers and one kid who wanted him to autograph a framed "Space Jam" print. Gum-snapping teenage girls sat a row below him. Dozens of fans and high schoolers pulled out their cell phones and started taking photos of him like he was on exhibit.

Jordan wore a khaki-green baseball cap, jeans and some sort of pullover top, but it was hard to miss that face -- and the grape-sized diamond stud on his left earlobe. Former Chicago Bulls teammate Dickey Simpkins chatted him up, which helped discourage anyone who tried to interrupt. But the minute Jordan sat down on the worn, wooden bleachers, just about everyone in the 2,000-capacity Wheeling High School gym knew MJ was in the house.

"Everyone at our home games is kind of used to it," said Loyola coach Bryan Tucker, a former pitcher at Notre Dame.

Kind of, but not totally. A Loyola gym meant to comfortably hold 1,500 spectators now gets 2,000-2,500 each game. The fans are lined up three deep in the balcony. You have to bob your head to see a thing.

The Ramblers are 15-0, ranked in the top five in the Chicagoland area, and will be on TV three times this season, including a Feb. 1 game on ESPN2 against Indiana-recruit Eric Gordon's North Central (Ind.) team. And they have one of the most famous fans on the planet.

"As much as you play it off, you still catch yourself taking a peek at him," said Pat Mahoney, Loyola's athletic director. "You want to see how he's reacting to the game. It's still really cool."

Jordan is a regular at Loyola's games, unless business, travel or his work as the Charlotte Bobcats' managing member of basketball operations (I have no idea what that means) keeps him away. This is the first year both of his sons, the 6-2 Jeff and the 6-3 Marcus, have played on the same varsity team, which also features senior forward Joe Suhey, the son of former Chicago Bears fullback Matt Suhey (Suhey is going to play football for Joe Pa at Penn State, just like Matt did).

The game against Streamwood that night wasn't much of a game at all. The Ramblers led 23-6 by the end of the first quarter and were up 39-18 at halftime. By then, Jeff and the rest of the starters were on the bench, and backup Marcus was getting lots of minutes. But even in a blowout, you could see the Jordans knew how to play the game.

Jeff, who is getting hard looks from mid-level Division I programs such as Loyola University, Davidson, Bowling Green, Illinois State and University of Illinois-Chicago, plays point and off guard. Marcus, considered the one with more long-term hoops potential, is a big guard/small forward. I don't think either of them made a shot. I'm not even sure they tried more than one or two.

Instead, they ran the floor. They defended. They showed a suitable-for-framing collection of spin moves, power drives and pinpoint passes on fast breaks and in half-court sets. They filled passing lanes. They had textbook spacing. They didn't chirp at officials. They didn't pose. They just played, and hard, too.

Their old man didn't say a peep, which was nice of arguably the greatest player ever to play the game. Instead, he worked hard on a piece of gum, sipped on his bottle of water, folded his hands across his knee, nodded his head after good plays, winced or smiled after botched plays. He let Tucker coach, which is what every parent should do at a ballgame.

"He wants to be a regular dad," said Mahoney. "He wants his kids to be coached. He leaves them alone. He lets them experience the ups and downs of high school life like everybody else."

A regular dad, eh? That's true, except for the shoes. A couple of seasons ago, Loyola's team captains picked out non-Jordan brand shoes. The Jordan shoes didn't come in maroon (Loyola's school color); their choice did.
"Am I killing you because my kids are wearing [the other brand]?" said Mahoney.

"Yeah, you really are," said Jordan.

Soon, they were wearing the Jordans. Seems like a fair trade. Loyola gets the Jordan sons. Michael gets to see his shoe product on the court.

At game's end, after Loyola had its 71-46 victory, Jordan walked down from the bleachers, took a right toward the Ramblers' locker room, waved to the chanting crowd and then took a left through some double doors and disappeared down a hallway. Tucker did a brief interview with a high school reporter, and then waited for his players to shower and dress.

Jeff was one of the last players to come out, which is sort of how Michael could be after games. But it isn't fair to always look for similarities between father and sons. After all, it can't be easy to be a Jordan and play hoops. You can try to be like Mike, but in the end, you can only try.

Jordan has never played one-on-one against Jeff or Marcus. They've played one-on-one-on-one, "and we've all pretty much won in that," said Jeff. Pause. "We can kind of take advantage of him because he's kind of slower, but, I mean, he can still shoot. So it's still a hard time [to win]."

Oh, boy, wait until the old man hears that. Jordan might be 43, but he still has his hoops pride.

"There's not a point in my entire life where he's letting me win in anything," said Jeff. "It's always competitive when we're playing."

And yet, Jordan's message to his sons has been to have fun. That's it: have fun. Jordan was cut from his high school team as a sophomore -- Marcus' age. It sparked the greatest "I'll-show-you" run in the history of sports.
But this is different. Jordan sometimes will watch video with Jeff and Marcus after a game. Other times, he might mention something about their hoops technique. Or he might not say anything at all.

It's already hard enough without Jordan doing a Daddy Dearest thing. During AAU games, Jeff has been taunted by opposing players. "I've definitely gotten some trash-talking," he said. "But I usually try not to talk back."
But the cleverest -- and often the cruelest -- comments come from opposing fans, said Jeff. Figures.

Just imagine if Jeff decided to go to North Carolina, where Jordan helped the Tar Heels win the 1982 national championship. Jordan has talked to Carolina coach Roy Williams about it, but don't hold your breath.

"Obviously I don't want to be in a situation where I have to walk on and kind of play behind starters for three, four years," said Jeff. "I'll just go to the best situation for me and try to come in and play."

We spoke for another minute or two, shook hands and off Jeff went. I saw one of Jordan's security people, but I didn't see MJ again that night.

A week and a half later came the news: Jordan and his wife Juanita, who never misses her sons' games, had divorced after 17 years of marriage.

So much for having fun.