But now, with Ohio State on the brink of its second national title in the last five seasons, it seems almost inconceivable that anyone but Jim Tressel would be the Buckeyes' coach. Not by the sheer will of his personality, but almost by the lack of one, Tressel has become an Ohio State icon, a calming, soothing figure who has deftly shaped this mammoth, tradition-soaked program into his own likeness.

Gone is the cherry bomb Maurice Clarett, who loudly helped win Tressel his first championship in 2002, and then slowly and spectacularly self destructed. Re-invented is the once troublesome Troy Smith, who, with the gentle guidance of Tressel, has become more than a Heisman Trophy winner, but a man no longer allergic to accountability and responsibility. It turns out this is a team that doesn't exactly mirror its coach (Tressel thinks an iPod is a football formation), but it does reflect his core themes: faith, humility, caring and, yes, even love. 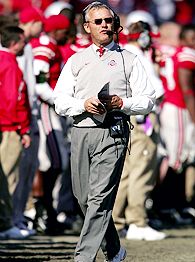 "I know people love to rip Tres, but he does stuff you won't see a guy in his position do," said offensive tackle Kirk Barton. "How many guys making that much money are going to stoop to pick up ankle tape left on the ground?"

Barton is right: people love to rip Tressel. I've been one of them. I thought Tressel and Ohio State at first reacted clumsily to the mushroom cloud of controversy created by Clarett's brief OSU career. I thought Tressel's credibility was compromised earlier in the season when he said he voted Texas No. 1, when in fact his ballot actually had Ohio State on top. And I thought Tressel embarrassed himself with his decision not to vote in the final coaches poll.

There has always been something about him that struck me as disingenuous. There seemed to be a disconnect between his public persona and the realities of his program, which included a string of player arrests and questions about academic commitment. Just once I wanted to see him wander from his talking points and show us something as innocent and, in a small way, as revealing as what Barton saw: the most popular millionaire in the state of Ohio (he earned $2.6 million in 2006) playing locker room janitor.

By his own admission, Tressel, 54, is a combination of dull and duller. He doesn't overpower a room, but instead blends in. He's the Scotchguard-ed berber carpet of college football coaches -- functional, durable, dependable, and stains don't stick.

Bland works. Tressel is 62-13 since coming to Ohio State in 2001. He's won a national championship, three Big Ten titles and is a victory away from his second undefeated season. He's beaten Michigan five out of six times, has coached a Heisman winner, and has generally perfected the art of saying nothing in news conferences.

Do we know him? Nope. Those moments are reserved only for his family, his friends and his team. Everyone else, especially us in the media, receive the polite Tressel stiff arm.

"I think you guys get what he is," said All-Big Ten center Doug Datish. "He doesn't change himself to go up there on the podium. He doesn't put on a Tressel mask. He's that guy all the time. I've never seen him deviate from being that person. He's always saying those type of things. I think the only thing you guys might not realize is that he's quite funny. He's hilarious."

"I know people love to rip Tres, but he does stuff you won't see a guy in his position do. How many guys making that much money are going to stoop to pick up ankle tape left on the ground? "
-- Offensive tackle Kirk Barton on Jim Tressel

Sorry, but Tressel does keep the non-Buckeyes world at a distance, which is fair enough. Nowhere in his contract does it say he has to bare his soul for the minicams and notebooks.

"I suppose there's a side of everyone that no one knows," said Tressel.

But if Tressel keeps us at a distance, then he has to be willing to deal with the broad brush strokes used to describe him. And he is willing to live with those portrayals, not all of them kind, because he understands the power of winning and the power of his own convictions.

Steve Snapp, the longtime Ohio State associate athletics director for communication, said Tressel is "probably the most decent man I've ever met, with all due respect to my dad." Wow.

Snapp, who has seen Buckeyes coaches from Woody Hayes to John Cooper come and go since 1973, said that even he got emotional earlier this season at a pregame "skull session" at St. John Arena. The session, which is a pep rally of sorts featuring the Ohio State Marching Band, included the usual appearance by the Buckeyes team. When Tressel was introduced to the 10,000-plus fans, he was greeted by a thunderous ovation that lasted nearly four minutes.

"It's like he's got the power to make everything better, to make everybody forget their everyday problems," said Snapp.

You can make the argument there are three football franchises in Ohio -- the Cleveland Browns, the Cincinnati Bengals and the Buckeyes. Ohio State outdraws each of the two NFL teams with ease, and does so with one less home game. The Ohio State fans come to see wins, of course, but there is little doubt they now regard Tressel with some of the same reverence once reserved for the legendary Hayes.

Hayes wore his signature ballcap, white short-sleeve shirt and tie. Tressel has his own distinctive attire -- the pleated pants, sneakers, shirt and tie, and, of course, the sweater vest, complete with the American flag pin. You don't whether he's coaching or running for state representative.

His players and staff swear by him. Even Clarett, serving a mininum of 3½ years in a Toledo prison for aggravated robbery and carrying a concealed weapon, has reportedly endorsed Tressel. Defensive tackles David Patterson, one of the team captains, and Quinn Pitcock talked glowingly about the personalized book Tressel issues to each Buckeyes player before the start of each season. In those hundreds of pages are anecdotes and quotations emphasizing self-reflection, responsibility, and caring for one another.

"It's something you look forward to getting every year," said Patterson.

This is the Tressel few outsiders see on a regular basis. Mysterious isn't the right word. Instead, he simply isn't interested in wearing his personality on one of those short sleeves.

What would happen, I asked Datish, if the players arrived at a team meeting wearing grey sweater vests  you know, just to mess with Tressel?

"That would be a bad day for us," said Datish. "He might think it would be funny for a little bit, but there would be some payback later in the week We might be at a banquet or something and [he'd] make you go up there and sing the fight song, something like that."

I'd pay money to see those players in vests. I'd pay more money to see Tressel get even. At least then I'd know there's more to him than football and a straight face.