You're amazing. A football savant. You ought to be the first person Florida coach Urban Meyer invites to the Gators' celebration rally at The Swamp on Saturday.

Or as Florida defensive tackle Ray McDonald said as he sat in front of his locker late Monday night: "Walden who? Whoever he is, he's a genius." 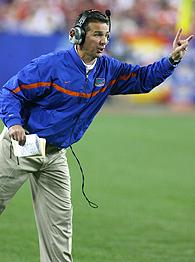 Only one person in the solar system voted Florida No. 1 in the final regular-season polls: you. Nobody -- and I mean nobody -- had the nerve to do what you did in the Harris Interactive poll. Nobody saw what you saw, except maybe Meyer -- and he doesn't vote in the USA Today coaches' poll. And even if he did have a ballot in the other poll used in the BCS standings formula, do you really think he would have bumped his one-loss Gators over then-undefeated Ohio State?

Nope, you were the lone believer. And, man, did you take some heat for supposedly making a mockery of the BCS. You were ridiculed from coast to coast. And now, sitting in your Idaho home on Lake Coeur d'Alene, you've been vindicated. And so have the Gators, who left teeth marks on an Ohio State team that played as if its cleats were tied together.

Remember what you said when we talked by phone during the third quarter of the championship game?

By then, Florida was up 34-14, and you said that the University of Phoenix, which doesn't even have a football team, could beat Ohio State.

Just kidding. What you really said was that Florida had quickness, "and you don't see quickness playing against bad teams. I felt [Ohio State] would not have a vivid picture of what Florida would show."

You didn't stop there. As you watched the 41-14 blowout, you said that no team in the country "had played more great teams, more often, with more consistency and with more intensity than Florida." You said there was no comparison between Florida's SEC schedule and Ohio State's Big Ten opponents.

"Ohio State and Michigan were the two best teams in a really bad league. Florida was the best team in a really good league."

Turns out Florida was the best team in any league. The Gators scored more points against the dearly departed Buckeyes than they did against 11 other teams on their schedule, including Vanderbilt. Ohio State quarterback Troy Smith played so gruesomely awful (4-of-14 for 35 yards, one interception, zero touchdowns) that the Heisman people might want their trophy back.

OK, that's a cheap shot. Smith didn't get much help. Star wide receiver Ted Ginn Jr. apparently injured his left foot moments after returning the opening kickoff 93 yards for a touchdown. It was the last time he touched the ball and the last time Ohio State had the lead. Ginn spent much of the rest of the game on the sidelines. Hard to score while you're leaning on metal crutches, eh, Jim?

The Gators' defense pressured Smith into an interception and fumble. They sacked him five times. They held Ohio State's offense to eight first downs and 82 -- 82! -- total yards. It was so bad that Smith, a stand-up guy, actually apologized to the Ohio State seniors for his play.

But it wasn't entirely Smith's fault that five of Florida's scoring drives started inside the Ohio State 50-yard line. And Smith couldn't block and complete passes at the same time.

"It was too easy, really," McDonald said.

Meanwhile, Florida's offense did donuts around the confused, slowish Buckeyes defenders. The Gators gained 370 yards, ran a staggering 43 more plays and had the ball 40:48 of the 60-minute game. Meyer used so many formations that Ohio State developed a nervous tic. And about the only Gator who didn't line up at quarterback was Meyer's wife, Shelley.

It was an official woodshed game by the end of the first half. And you knew it nearly 40 days earlier.

"I'm not a Gator lover," you told me during a timeout. "I just voted for the team that I thought was the best." 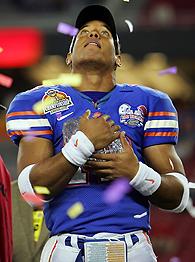 And just like Gators quarterback Chris Leak, you're still underappreciated.

"Who's that?" said Florida athletic director Jeremy Foley, when I mentioned your name.

"How would I know him?" said senior center Steve Rissler.

But then I told them how you were the only voter who jumped the Gators over the Buckeyes in the final regular-season Harris poll. You should have seen their faces light up.

"He probably knew that if anybody from the Big Ten played in the SEC, they'd probably lose two, three games," McDonald said.

Actually, you did know that, didn't you? And you have the lone vote to show for it.

"I love college football," you told me. "It's one of the greatest things that ever happened to our society."

I don't know about that, but the thoroughness of Florida's upset was one of the great football surprises.

The only other surprise?

That Meyer didn't have your Idaho number on speed dial.