NEW ORLEANS -- I hand my car keys to Deuce McAllister and ask him to show me his city. And for the next hour and 35 minutes, the conscience of the New Orleans Saints steers the white SUV through his wobbly, proud and heartbroken town.

As we pull out of the Saints' team headquarters in nearby Metairie, you can see what was once the landing zone used by the Black Hawk helicopters. The Saints' complex is where the National Guard set up its central command unit in the aftermath of Hurricane Katrina. Exhausted soldiers slept on cots in the indoor practice facility. Three huge generators provided the place with precious electricity. McAllister still keeps in touch with a handful of those soldiers.

McAllister wasn't born here, but his hometown is Lena, Miss., which makes him a child of the Gulf Coast. When the Saints selected him out of Ole Miss in the first round of the 2001 NFL draft, McAllister adopted New Orleans as his own.

His home in suburban Luling survived Katrina's brutality, but his relatives in Gulfport and Biloxi, Miss., and throughout Louisiana weren't as fortunate. "As far as homes and property, 95 percent of that was lost," he says, as he drives down Airline Drive toward the city. "But they have their lives, so they're blessed."

McAllister watched the network news coverage of the disaster and noticed a man trying to get on one of the buses used to transport evacuees. The face seemed so familiar. Then McAllister realized the man was one of the Saints' team cooks. He had been searching desperately for a lost relative.

"That's where it started to hit me," says McAllister, the Saints' all-time leading rusher. "He's looking for his daughter or niece. That's where it really just broke your heart."

As we inch through the early afternoon traffic, McAllister points toward the base of a highway overpass directly ahead. "Just to give you a perspective, this is how far the water came out," he says.

"How far are we from the center of the city?" I ask.

"About five miles," he says.

Even now, almost 17 months after the hurricane descended on the region, the stories from survivors still linger with him. There was the young woman who told him Katrina had destroyed everything in her home -- everything except a Deuce McAllister bobblehead doll she had purchased at an autograph session.

There were the haunting looks of evacuees at Louis Armstrong International Airport. McAllister was there about five days after the hurricane, and he'll never forget how volunteers and medical personnel used luggage carts to move some of the evacuees around the staging grounds.

And there are still the strangers who tell McAllister their sad, sad tales in letters or approach him in person and ask for help. So he offers a little cash or writes a check or refers them to his charitable foundation, Catch 22.

"You try to do what you can," he says. "You wish you could help everybody, but you know you can't. But we'll do what we can."

New Orleans has lost so much, beginning with its people. The city's population is about half what it was pre-Katrina. The French Quarter, which, relatively speaking, sustained the least damage, often resembles a ghost town during midweek. The Superdome, site of unspeakable human horrors in the days and weeks after the storm hit, has since been refurbished. The Saints play the Philadelphia Eagles there Saturday evening in the NFC divisional playoff.

"The perception is that everything is fine, which is far from the truth," McAllister says as we near downtown. "We've got a ton of people who want to come home, but they don't have any homes to come to."

We drive past Tulane University Hospital, which was without power in the aftermath of the storm. "Their doctors and nurses did what they could to try to save their patients, but ..." says McAllister, his voice trailing off. At least the hospital is operational; nearby Charity Hospital remains closed.

A few minutes later, as we pass the First District Police Station, McAllister nods toward a low-income housing project left abandoned after the flooding. One of the frightening trickle-down effects of the inner-city exodus is that some of the gang members and drug dealers who used to live or do business here have relocated to Jefferson Parish or neighboring cities outside New Orleans. Turf wars rage in and out of the area.

"It looks like these projects aren't going to reopen, so all of these people haven't returned," McAllister says. "Or if they have returned, they've had to re-establish themselves somewhere else, whether they had the money or not."

Money. That's a sensitive subject in New Orleans. You can't talk to locals here without their frustration with the government bubbling to the top of the conversation.

McAllister is no different. He sees an opportunity for his city to rebuild and improve its infrastructure, beginning with its beleaguered school and health care systems. He sees a chance to build affordable housing for the disenfranchised. He sees hope. And he sees debilitating political inertia.

So I ask him, if we were talking about predominantly white, upper-middle class neighborhoods in need of massive reconstruction, would there be a greater urgency and effort to rebuild?

"I don't know if it would happen any quicker," he says, quick to add that the more affluent Lakeview area also remains in distress. "Nine times out of 10, probably yes. But I think if you look at it, just the whole process, nobody's ever been on the same page, from the federal to the state to the local, so how can you expect them to be on the same page when it comes to funding? Meanwhile, people sit and wait and suffer.

"Say you're a person who doesn't have a 401K and you don't have a savings account," he says. "Then you're starting over from scratch with zero. You took a bag for two days thinking it was a little trip. 'Well, a storm is coming to New Orleans, so I'm going to take a two-day trip. We'll be back.' But there's nothing to come back to. That's a story I've heard tons and tons of times from a lot of people." 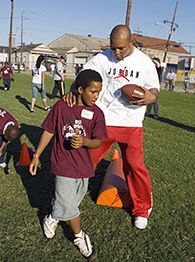 McAllister takes a right at Broad and Orleans. You see blocks and blocks of boarded-up houses, almost every one bearing a spray painted X on the front. The quadrants of the X include the date of the inspection, the origin of the inspection crew, whether the crew entered the structure and, in some cases, the human body count or graffiti notes that read "No cat found" or "Live dog."

The city isn't without its celebrity benefactors. Denzel Washington, Harry Connick Jr., Bill Cosby and assorted Saints, Hornets and other NFL, NBA and MLB players -- among others -- have visited and contributed to the rebuilding effort. The city, McAllister says, is a shell. "And you can do what you want within it, as well as outside of this city. But if they don't start with education, it's going to be hard."

We pass damaged St. Raphael School in the Gentilly section of town. We pass rows and rows of those all-too-familiar white, FEMA-supplied trailers. The temporary housing trailers are as much a part of the city's landscape as the Mississippi River these days. At the Historic New Orleans Collection store in the Quarter, you can even buy Christmas cards that feature the trailers on the front.

PODS storage containers dot the front yards of some houses. Rows of trailers sit next to the Franklin Avenue Baptist Church. "They do a great job," McAllister says of the church volunteers.

A Habitat for Humanity sign is pointed down a street. Cars line up at an intersection; no electricity, so no stoplights. Small children play in front of their X'd-out house.

The piles of rubble grow taller and the number of blue roof tarps grow more numerous as we near New Orleans' version of ground zero, the Lower Ninth Ward.

"That's when your jaw is going to drop," McAllister says. "We're revisiting Aug. 29 of 2005. Nothing, literally nothing, has been done to about 95 percent of the area."

We cross one of the three bridges that span the Industrial Canal, drive a few hundred yards and soon find ourselves in the middle of hell.

"Yep, this is the Lower Ninth Ward," he says.

Whatever photos you've seen of the destruction of what the locals call "The Lower Nine," they don't do it justice. Whatever video you've watched on your nightly news doesn't convey the desolation. There were people here once. And houses. And lives. Now there is virtually nothing left.

A house somehow sits at a 45-degree angle, its nose buried deep into the ground. Useless power lines are draped along potholed streets. A thick light pole rests on the concave roof of a rusted car. The hull of a small boat lies half overturned in someone's front yard.

"You could say the storm literally hit yesterday," McAllister says as he tries to avoid the deepest potholes. "And to think that water did this -- not a nuclear bomb or a bomb, but water."

Jumpsuit-attired members of a demolition crew wave as we drive past the skeleton of a brick house. A tour bus arrives, and out spill several women with digital cameras. "They bring them in from the airport," McAllister says.

It's time to head back. We drive back over the bridge, past the camouflaged Humvees used by the military police, past the twisted metal of a gas station roof, past the wooden planks that serve as walkways into a row of shotgun houses. And we're 10 minutes from downtown.

At city's edge, on South Claiborne Street, McAllister pulls the SUV over to the side. A highway overpass, at least four stories high, runs alongside the Grand Palace Hotel. McAllister stood on that overpass with Red Cross workers and National Guardsmen a few days after the storm hit. They were watching the water move down Canal Street when a man opened his window on the eighth or ninth floor of the hotel.

"I'll never forget it," he says. "He was just sitting there, and he wanted to know if we had that day's paper and any fresh water on us. We told him the National Guard would come get him, but he wasn't trying to leave. He said, 'Nah, the power will be back on soon. This will basically blow over.'"

The Superdome soon appears on our left. We can see it from the same road where McAllister and the Red Cross crew passed animal corpses and deserted cars.

McAllister, perhaps more than any other Saints player, knows how much a victory against the Eagles would mean to this city. As corny as it might sound, these people have wrapped their arms around the Saints and they don't want to let go yet. McAllister often is stopped by fans who simply say, "It means so much for you guys to do well."

The Saints are New Orleans' escape from reality. When the team made its 2006 regular-season debut at the refinished Superdome on Sept. 25, McAllister thought the crowd noise was going to rupture the roof.

"And this game will rival the opening of the Superdome," he says.