CHICAGO -- I officially give up. The Chicago Bears have reduced me and my anti-Monsters of the Midway skepticism to a puddle of slush, which, by the way, is exactly what they did to the New Orleans Saints in Sunday's NFC Championship Game.

At some point -- and that point came late in the third quarter when Saints quarterback Drew Brees freaked and threw a pass to, well, nobody from his own end zone for a safety -- you just have to quit fighting the part of your brain that says, "The Bears aren't really going to the Super Bowl, are they?" You have to forget about Good Rex/Bad Rex, about the home advantages of 13-degree wind chills and gentle snowfalls, about how a missed 47-yard Saints field goal might have turned a blowout-to-be into a New Orleans victory. 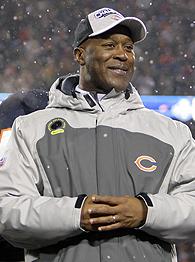 Instead, you pretend you're getting soaked by a cooler's worth of Bears Kool-Aid. That's what I'm drinking these days. And you know what? It doesn't taste half bad. There's a little bit of a crow afterkick, but I'll live.

The same can't be said for the Saints, who just lost to a quarterback who at halftime had completed three of 12 passes for a grand total of 37 yards, who finished the game with only 144 yards, a sub-50 percent completion rate and converted only three of 16 third-down plays.

See, there I go again. I didn't mean that. What I meant to say is that the Saints were more disorganized than a Mardi Gras parade. Think about it: just 56 yards rushing, three lost fumbles, an interception, a safety, a missed field goal, three sacks allowed, seven of 15 drives that started at their own 20-yard line or worse (six of the Bears' 16 drives started on the New Orleans side of the field) and, of course, hypothermia.

What a long plane ride back to Louisiana that must have been. The loss doesn't diminish how the Saints brought a crippled city together every Sunday, but it does make football morons out of everyone (hello) who thought the Saints were going to leave Soldier Field with the NFC's George Halas Trophy.

"Going into this week we heard a lot," said Lovie Smith, who becomes the first African-American head coach to reach the Super Bowl. "We went into the game with the best record in the National Football League. We really didn't get a lot of respect. Not many people gave us a chance to win the football game, but our guys didn't buy into that. They bought into each other."

This is true. NFL scouts, ESPN experts, hacks like myself all considered the Bears a vulnerable team. Their quarterback, Rex Grossman, was a 1,000-piece puzzle. Their defense was no longer overpowering. Meanwhile, the Saints had the No. 1 offense, an unflappable quarterback, an underrated defense and all of that Hurricane Katrina-related feel-good story karma.

So in the postgame interview session with the giddy (for him) Smith, I figured it was time to accept my fate. If you take your shots at a coach and a team -- and I've taken my share at Smith and the Bears during the past four weeks -- then you better be prepared for the payback.

"And you were one of them, Gene," interrupted Smith.

"Yes, I was," I said. "Do you think finally what you guys did today will convince people like me, and the others, that this team deserves the respect you talked about?"

It was nice to see Smith take a verbal whack at somebody, even if that somebody was me. It was nice to see his pulse rate reach double digits. You realized that behind that soft Texas twang of his, Smith has a deceptive intensity that, in three seasons, has trickled down to every part of this roster and organization.

"Not really," said Smith. "We won 14 games and we didn't convince you then. But that's not really our plan. Our plan is, if you can win it all, then you get respect. You don't get any respect until then. I like what the New Orleans Saints did all year too. I like their football team. But as far as we're concerned, we get our respect once we're able to hold up that ultimate trophy."

Afterward, Smith invited me into his locker room office, doused me with a bottle of Dom, and then started chanting, "Ditka who?"

Not really, but it was nice to see Smith take a verbal whack at somebody, even if that somebody was me. It was nice to see his pulse rate reach double digits. You realized that behind that soft Texas twang of his, Smith has a deceptive intensity that, in three seasons, has trickled down to every part of this roster and organization.

"He's the best coach in the league," said Grossman, who has his share of criticism bruise marks -- some of them deserved, some of them excessive. Fox TV's Terry Bradshaw got it right when he noticed the Soldier Field crowd shower Grossman in cheers during the postgame celebration. "Listen to them," said Bradshaw, "they're loving you now."

I'm not in love with the Bears; it's more, I'm in like with them. But I've quit trying to figure out how Grossman can be so hesitant and inefficient one minute, and then, with the game essentially on the line, complete consecutive passes of 13, 20, 12 and 33 yards. What was once an iffy 18-14 lead suddenly became a 25-14 advantage two plays into the fourth quarter. Grossman also led an offense that committed just one penalty (a 5-yard false start) and no turnovers.

And I hereby vow not to doubt the Bears' defense. Brees had enough grass stains on his uniform to do a laundry detergent commercial. And what was Saints' rookie Reggie Bush thinking as he turned around to taunt All-Planet linebacker Brian Urlacher as he covered the last 14 yards of a stunning 88-yard touchdown run early in the third quarter? First he pointed at Urlacher, and then he did a somersault as he crossed into the end zone.

"We weren't going to let that go down in our backyard," said Bears safety Chris Harris.

And they didn't. Late in the fourth quarter, with the Bears applying the finishing touches on the unexpected rout, Brees threw a pass over the middle to rookie receiver Marques Colston. The moment the ball arrived, so did Urlacher, who must have thought he was filming another one of those Nike Briscoe High commercials. Marques, meet Brian.

And, America, meet the 15-3, NFC Champion Chicago Bears. If you need a testimonial, you have my e-mail address: Gene.Wojciechowski@IBelieve.org.