MIAMI -- Her youngest son  her little baby Nathan, is playing in the Super Bowl, but Monica Vasher won't be here to watch. The manic depression won't let her.

Instead, she'll spend all of Saturday in bed resting and sleeping, trying to build enough energy reserves to counterbalance the sometimes overwhelming panic attacks. She'd like to go to church Sunday -- other than her doctor visits, it's one of the few times each week she leaves her Texarkana, Texas, duplex -- but God will have to forgive her if she chooses to lay in the darkness of her bedroom.

"I think He will too," she says. "I think He'll bless the Bears anyway."

Forget about the Chicago Bears; bless Monica. She needs it more than the Bears. All they have to do is play the Indianapolis Colts in Super Bowl XLI. Monica has to figure out a way to tame her bipolar disorder each and every day, but especially this Sunday, beginning with the first time she sees Nathan, a Pro Bowl cornerback, on the Dolphin Stadium field.

She'll watch it all -- the pregame shows, the game, the postgame football autopsies -- on the 28-inch TV at the duplex she shares with her younger sister Sherry. There's talk of maybe watching the Super Bowl at a friend's house, but that might be a bit too hard on Monica. After all, the Bears' NFC Championship win took so much out of her that she didn't get out of bed until the Tuesday after the game.

"That let me know right there I couldn't handle the pressure of all those people," she says.

She means, of course, all 75,000 fans who will be wedged inside Dolphin Stadium Sunday.

For a woman allergic to strangers, crowds or loud noises, the Super Bowl would be the emotional equivalent of a five-alarm fire. When the panic attacks come, Monica sweats enough to fill a Gatorade cooler. She has difficulty breathing. Her fingers shake. Sometimes she sobs uncontrollably. Not even the mood-stabilizing meds she takes on a daily basis can outpunch the bipolar disorder.

So she watches a Comcast Chicago feed of Nathan and the Bears arriving for a Super Bowl news conference. Nathan bought her a satellite TV package so she could see all the Bears' regular season games, and then switch to the local Chicago stations for the postgame wrap-ups. She'd watch Nathan play, then watch him meet the press in front of his locker. She'd even call Nathan's grandmother, who didn't get the same Chicago feed, and hold the cell phone next to the TV so grandma could listen. And then, when the mini-cam lights clicked off, she'd call her son.

"Nathan, I just saw you on TV," she'd say, as if it were still the first time.

That's how their football relationship works -- via TV. Monica hasn't been to an actual game since Nathan's senior year at Texas in 2003. She shook like a wind-battered leaf during Senior Day, and it took her a full week to recover from the trip. "But I got through it," she says. "I wanted him to be as proud of me as much as I was proud of him."

Are you kidding? If you like a good love story, you should hear Monica talk about her three sons. She calls David, Roy and Nathan between 10-10:30 each night to wish them sweet dreams and to tell them how much she loves them. And Nathan calls her twice a day, just to make sure she's doing OK. 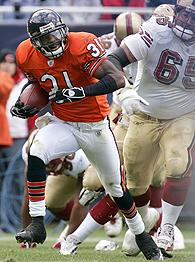 She wasn't doing OK the day she decided to drive to a mall to buy a Bears jersey. Monica was in a manic phase at the time. A shipment of pricey No. 31 authentic Vasher jerseys had arrived, and her mind kept telling her she had to have one of those orange jerseys right now, as if everyone in Texarkana was already there. So she drove to the mall, parked as close to the store as possible, bought the jersey, but couldn't reach the exit before she began sweating and fidgeting. She was having an anxiety attack.

By pure chance, a friend saw her and helped Monica back to the car and home. "I was blessed that day to have someone there who knew me," she says.

Monica has more friends than she realizes. A day or two after the Bears were eliminated from the playoffs last season, Monica's phone rang. It was a Chicago-area number on the caller ID, but it wasn't Nathan's number.

Smith laughed softly. "I know where Nate is," he said in his Texas drawl. "I just called to see how you were doing."

So Nathan's boss and Nathan's mother talked for about 10 minutes. They talked mostly about her, and a little about the Bears, about Nathan, and about humble beginnings. "We're just two Texas boys trying to make it in Chicago," said Smith of himself and Nathan.

They made it, all right -- all the way to Super Bowl XLI. But Smith never told Nathan that he had called Monica. Instead, he patted Nathan on the back that day at Halas Hall and told him to have a good offseason. It wasn't until later that Monica told her son about the surprise conversation.

"He's a special man," says Monica of Smith. "I will never forget it."

And she definitely won't forget the recent NFC Championship victory against the New Orleans Saints. Early in the fourth quarter, Nathan intercepted a Drew Brees pass and celebrated by returning to the Bears' sideline, tugging at his jersey and telling the TV cameras, "This one's for you, momma."

Back in Texarkana, Monica wanted to smooch the screen.

"I felt like the only momma in the world that had a son going to the Super Bowl," she says.

It was Nathan and Roy who decided Monica would be more comfortable watching Sunday's game in Texarkana. Monica didn't argue. She was disappointed, but she knew it was the right decision.

Monica will sleep for the better part of 36 hours this weekend, all so she can watch her son for four hours. And if she does manage to make it to Oak Street Baptist Church for morning services, it won't be hard to pick her out of the crowd.

She'll be the one wearing the orange No. 31 jersey.