The simple truth is that I was scared stiff of a 77-year-old grandfather who, in the first five minutes of our conversation, nodded toward one of the TV screens in the hotel bearing his name and said, "I have one of those."

One of those was an ab exercise machine, the kind you order at 2 a.m. after watching a 30-minute infomercial hosted by one of the Brady Bunch kids. But, hey, if the king of Miami wants to do stomach crunches on some medieval-looking Ab-ercizer, then I'm all for it. That's because Don Shula is football cool -- and that was long before he blowtorched six-faced Nick Saban all the way from here to Tuscaloosa. 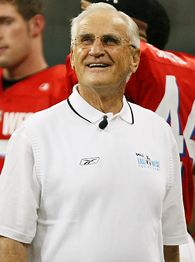 Before there was Bill Cowher and The Chin, there was Shula and The Jaw. It jutted seemingly to the hash mark. It looked as if it could crack pecan shells. The truth is, if you asked a police sketch artist to draw a picture of a football coach, you'd get Shula's likeness.

He coached his last NFL game on Dec. 30, 1995, and remains the league's all-time winningest coach. It isn't even close. There's Shula's 347 victories, followed by George Halas' 324, followed by Tom Landry's 270. Marty Schottenheimer, the closest active coach on the list, is 142 car lengths back at 205 wins.

Shula didn't become part of NFL history, he made it. He coached the Baltimore Colts and the Miami Dolphins to a combined six Super Bowls and won two of them. He is best known for becoming the first coach to lead an NFL team to a perfect season (his 17-0 1972 Dolphins), the first coach to lose a championship game to an AFL team (Super Bowl III vs. Broadway Joe and the New York Jets), and the first coach to vaporize a reporter's notebook with a single stare.

He used to be a football coach. Now, he's an industry. You can't swing a bottle of A1 sauce without hitting one of his steakhouses. And in this particular part of Miami Lakes, which is a few miles north of Miami, there's a Don Shula's Hotel, Don Shula's Golf Club and Don Shula's Athletic Club. Yet the waitress at the hotel restaurant has no idea she's about to take the Cobb salad order of the guy whose name and likeness is on the front of the stucco building, and whose photographs are on nearly every wall in the place. Instead, she happily announces to the table, "Welcome to Shula's Steak 2. My name is  "

Shula grins slightly, but doesn't say a peep, except to order his salad and a diet iced tea and to point to the Ab cruncher on one of the TVs. He's taking a break from signing 700 footballs in a third-floor room. Only 250 more to go.

"Are you a Hall of Fame voter?" he says.

"If that happens [a team goes undefeated], I'm going to be the first guy to call that coach and congratulate him. And our players will do the same thing. But until it happens, that's a record we're proud of."
-- Don Shula, on the perceived notion that he and the rest of the undefeated '72 Dolphins are a bunch of angry, old men.

No, I'm not, which is a good thing because Shula basically thinks anybody who hasn't voted for former Dolphins offensive lineman Bob Kuechenberg is a bona fide chowderhead. So I only get the condensed version of the Kuechenberg-for-Canton pitch, which is the guy played three positions, played for 15 seasons, neutralized HOFer Alan Page in the Super Bowl VIII win against the Minnesota Vikings, and shouldn't be penalized just because linemen Jim Langer and Larry Little are already in from that Dolphins era.

The official announcement for the 2007 Pro Football Hall of Fame enshrinees is Saturday afternoon. Memo to the voters if Kuechenberg doesn't get in: Stay clear of Shoes.

"He's a good guy," says Shula of Singletary. "This guy's a good guy, Norv Turner. Jerry's got everybody in there for interviews, doesn't he?"

"He hasn't called you yet?" I say of owner Jerry Jones' head coaching search.

A Notre Dame alumnus, presumably speaking on behalf of the university, once approached Shula in the late '60s, early '70s about coaching the Fighting Irish. It had always been Shula's life ambition to play and someday coach at Notre Dame.

"But after I got into the NFL, I didn't want to go back into college coaching," he says.

Shortly after he retired from the NFL after the 1995 season, Shula says he was contacted by Baltimore Ravens owner Art Modell. Modell wanted him to coach the new Ravens franchise. Shula said he wasn't interested, so Modell asked him to return as a team consultant. Shula took a pass and, except for the 3½ hours he would have spent each week on the sideline, doesn't regret the decision.

"The thing that I miss most of all is game day," he says. "I don't miss the long days and the endless nights, and the hard work and the preparation.

The old Shula used to choose his words with the care of a woman picking out her engagement ring. The new Shula speaks his mind, and Saban, who bolted from the Dolphins to Alabama after insisting we were all idiots for asking him about the persistent rumors, has the verbal burn marks to prove it.

It's a sucker question, I tell him, but if Saban asked for one of those autographed footballs, what would Shula write on the pigskin? He smiles, starts to say something, then stops.

"I think I've said enough about the subject," he says.

But there are other subjects, including alligators, Donald Trump and Super Bowl picks, and new Shula isn't reluctant to offer his opinions.

On the rumor that he keeps a bottle of champagne on hand to celebrate the end of another team's run at NFL perfection: "That's bull----. [Dolphins] Dick Anderson and [Nick] Buoniconti lived across the street from each other down in Coral Gables. When the last undefeated team got beat, they'd go out in the parking lot, pop open a bottle of champagne and toast each other. They were too cheap to invite the rest of us down to the party. But everybody thinks we're a bunch of angry old men who can't wait for that last team to get beat.

"If that happens [a team goes undefeated], I'm going to be the first guy to call that coach and congratulate him. And our players will do the same thing. But until it happens, that's a record we're proud of."

On The Donald and the USFL franchise Trump once owned: "He used to call me every Monday night. He knew if I wasn't coaching in it, he knew I'd be home watching the Monday night game.

"We're playing a game in Baltimore, and after the game, all of the questions weren't about the game but about Trump's interest in me. I said, 'How did all that get out?' And they said, 'Trump had a news conference and said the only thing that was holding you back from coming with him was that you were demanding a penthouse in Trump Tower as part of the deal.' And we had never even talked about that. But he was advertising Trump Tower. That was the end of our talking."

On the relationship between Shula and those Dolphins teams of the early '70s: "I had been riding them real hard in training camp. Manny Fernandez, [Larry] Csonka and [Jim] Kiick go out in the Everglades and trap this alligator. A small alligator, a baby alligator. They bring it in.

"After practice, I couldn't wait to get into the shower. So I get undressed, I open the shower door, put my foot down, and there's a live alligator there looking up at me. So I go running out, bare-ass past my secretary, and into the locker room. And they're all waiting for me. I knew right away it had to be Manny and Csonka who were the guys responsible."

On Garo Yepremian's famed, frantic "pass" that was intercepted and returned for a touchdown in the Super Bowl VII win against the Redskins, the 17th victory of the perfect season: "He's unbelievable. At first, we didn't even know who the hell he was. We picked him up from Detroit. He had never played football. He was a soccer player. The first field goal he had ever kicked, he came running over to the side wanting to high-five me. He said, 'I keek a touchdown! I keek a touchdown!' I said, 'No, Garo, that was a field goal.'

"That Monday or Tuesday of the next week he started to sell ties with 'Garo No. 1' on the ties. And that's just after kicking his first field goal.

"Kuechenberg still wants to kill him. He says, 'That guy's making a living off a stupid mistake that almost cost us the Super Bowl.'"

On players he wished he could have coached: "A couple of them are playing right now. Peyton Manning and [Brian] Urlacher. The way they handle themselves. The way they play the game. They remind me a lot of some of the great players I've coached.

"Manning's almost like a combination of a [Bob] Griese and [Dan] Marino. And as far as leadership, [Urlacher is] like Buoniconti. And he has the physical style of [former Colts linebacker] Mike Curtis."

On losing to the Jets in Super Bowl III (in Miami, by the way): "I certainly didn't want to be the first coach to lose to the upstart league. That's something I definitely felt, that pressure. But when the game was over, they had beat us. That's wasn't a fluke. That was a pretty good football team with a great coach in Weeb Ewbank and a great quarterback in Joe Namath."

On a coach who reminds him of, well, him: "I just admire [Bill] Belichick a lot for what he's done up in New England. I think he has total control."

On who he's picking and why in Super Bowl XLI: "I like Peyton Manning and the Colts. I'll be pulling for them, being an alumni -- a player and a coach. What I'm hoping for is a good game. It's such a downer if it turns out to be a blowout. I think the Bears can give them a good game if they can get that run going and keep the ball away from Peyton Manning."

The waitress drops off the check. No freebies even for Shula. A few fans stop by the table and ask him to autograph a few napkins. He chats them up and signs away. His understated 1972 Super Bowl ring (compared to those truck lug nuts worn by the Patriots) catches the light.

Lunch -- and the interview -- is finished. Shula has more footballs to sign. On Sunday, he'll be on the postgame podium as part of the Lombardi trophy presentation team.

Stupid me. Of course he can. After all, he has plenty of experience with Vince's hardware.