After weeks of breathless updates, when the only candidates Jerry Jones didn't interview were Barack Obama and Hillary Rodham Clinton, a decision finally has been made. And the winner of this vast, global, all-encompassing coaching search is  Wade Phillips?

You're kidding, right? Half of the world schleps to Valley Ranch to meet with Jones about the Dallas Cowboys' job opening and the best he can do is hire a twice-fired head coaching retread who has a playoff O-fer? This is the bold, "How-'bout-them-Cowboys!" move? 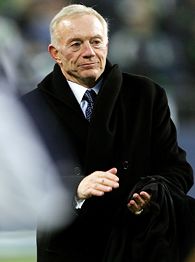 I don't get it. But I didn't get why Jones thought team-killer Terrell Owens was worth the inevitable T.O. knucklehead moments when he signed him a season ago. Or why Jones would hire supposed up-and-comer Jason Garrett to the coaching staff before he hired the actual head coach.

It would be one thing if Phillips' head coaching record separated him from the other candidates. But it doesn't. Instead of ooohs and aaahs, Phillips' 48-42 mark (including those three first-round playoff defeats) produces yawns and so-whats.

I know Phillips is an accomplished defensive coordinator. No one questions his credentials when it comes to coaching defense. But I'm not seeing anything on his résumé that screams, "Give him a third chance at being a head coach. He'll get it right this time."

Now you know why the Fritz Pollard Alliance and the Black Coaches Association often feel as if they're hitting their heads against non-padded goal posts. Here we are, only days removed from celebrating Tony Dungy's Super Bowl victory -- the first African-American coach to do so (to say nothing of two black head coaches in XLI) -- and then Jones hires Phillips.

Jones interviewed white guys, too. Niners offensive coordinator Norv Turner, who called the plays when the Cowboys won back-to-back Super Bowls in the early 1990s, was considered the favorite. But then Turner had the audacity to mention his negotiating wish list to Jones and that apparently was that.

Garrett, according to the Cowboys' own Web site, was considered a candidate for the head coaching job even after Jones hired him for an unspecified position. In-house guys Tony Sparano and Todd Haley were courtesy interviews (Haley has since taken the Arizona Cardinals offensive coordinator job). And, oh yeah, New Orleans defensive coordinator Gary Gibbs did the Valley Ranch dance.

And then there was Phillips, whose name percolated to the top of the rumored short list in the last day or so. This is so Jerry Jones. Go against the grain just to go against the grain. Don't let the outsiders tell you how to run your business, dammit.

Jones can rationalize all he wants, but in the end there isn't anything about the decision that is defining. Instead, it's an uninspired choice disguised as prudent.

It worked for him before. Jones canned the only head coach the franchise had ever known, Tom Landry, then hired former Arkansas teammate Jimmy Johnson, and then won two Super Bowls. Then he hired another Arkansas buddy, Barry Switzer, and won another Super Bowl. And then he entered the abyss.

Phillips becomes the fifth Cowboys head coach in the last 11 years, the sixth in the last 15. Jones can't help himself. He always wants his hands on the steering wheel. Phillips ... Bill Parcells ... Dave Campo ... Chan Gailey ... Switzer ... Johnson -- they all can sit in the front seat, but make no mistake, Jones is the guy driving the Cowboysmobile, and the guy who keeps getting into these fender benders.

You know those before and after photos of U.S. presidents? Fresh and vibrant when they take office. Worn and weary by the time they leave. That's how Parcells looked after his four-year term with the Cowboys. Tired. Half broken. Now he's working a toll booth in Gatorade commercials. Very sad.

Phillips won't last long. They never do. Johnson holds the record at five years. That passes for stability these days at Jerry Jones Land.

Jones will defend his choice by saying Phillips has NFL head coaching experience, that Phillips is one of the premier defensive minds in the game, and that his philosophy is better suited to Cowboys personnel. He'll say that Garrett is positioned to become the next great Cowboys play-caller and tutor to quarterback Tony Romo. And he'll blah, blah, blah about the fine pool of qualified candidates he interviewed.

That's fine. Jones can rationalize all he wants, but in the end there isn't anything about the decision that is defining. Instead, it's an uninspired choice disguised as prudent.

Wait, Phillips is 0-3 in the postseason as a head coach, right? And the Cowboys are playoff busts, correct? Maybe this is a perfect fit, after all.