Ron Zook cheats. That's what someone somewhere is saying about the Illinois football coach. Maybe they're not using that exact word, but whatever they're saying, it was enough to cause Zook to make the 137-mile trip from Champaign to downtown Chicago last week for a one-day "I Am Not A Crook" tour. 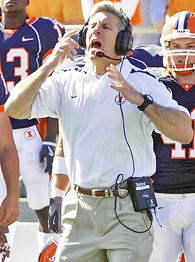 I don't know if Zook cheats. I know his latest recruiting class was given boffo reviews by the so-called recruiting experts, and that it included coveted wide receiver Arrelious Benn and defensive end Martez Wilson. I also know that if Zook knowingly and arrogantly broke significant recruiting rules, Illinois athletic director Ron Guenther will fire him faster than you can say, "NCAA sanctions."

But Guenther, much to Zook's initial dismay, already hired a law firm to check out the anonymous accusations. The firm found no wrongdoing. Now Guenther is conducting an investigation to determine who's responsible for the allegations. Nobody at Illinois will come right out and say it -- at least, not publicly -- but their negative recruiting leader in the clubhouse is none other than Notre Dame, which thought it had a commitment from Benn, but then didn't.

Adding to the nuttiness was former Michigan State coach John L. Smith, who basically said Zook had to be guilty of something, otherwise why would two blue-chip recruits want to play for a coach who has gone 4-19 in the last two seasons? "Where's there smoke, there's probably fire," Smith told the New York Times in a story that ran, much to Illinois' horror, on national signing day.

First of all, Smith always has been about a quart low when it comes to common sense, so consider the source. And if he has the goods on Illinois, he should say so. Instead, he hung Zook out to dry on a national clothesline, which helped prompt the emergency PR road trip to Chicago.

If you want to grill bacon strips on a man's forehead, simply ask Stoops about negative recruiting. Last week at his national signing day news conference, Stoops called out Oregon, said the Ducks' coaching staff tried to "steal" a couple of his recruits a year ago, and then reminded everyone of Arizona's 37-10 victory at Eugene this past season. So when he hears about Zook's situation, you can feel the burn all the way from the Tucson.