Andy Masur, who once had to retrieve Ron Santo's toupee from a hotel room (don't ask), calls me just as he's driving past snow-covered Wrigley Field early Tuesday afternoon. Masur is pissed.

"I just heard," says Masur, who is joining the San Diego Padres' broadcast booth after spending the last eight seasons as part of the Chicago Cubs' WGN Radio team. "How close was it?"

"Gawd," says Masur, "what more does a guy have to do? That is so wrong on so many levels."

Santo didn't make it into the Baseball Hall of Fame -- again. None of the 42 candidates on the 2007 Veterans Committee ballot were elected, which is the third consecutive time the Veterans have whiffed on righting a baseball wrong.

Santo belongs in the Hall of Fame like ivy belongs on the brick outfield walls of Wrigley. Why he still doesn't have a bronze bust in Cooperstown is beyond me, Masur, the 57 Veterans Committee members who did vote for him, and even the great sabermetrician himself, Bill James, who revolutionized the way we look at baseball statistics.

I once asked James, now a senior baseball operations advisor for the Boston Red Sox and a guy worthy of his own HOF candidacy one day, if he thought Santo's 15-year career had the necessary baseball gravitas. His reply: "To me it is clear and unequivocal that Santo is a Hall of Famer. ... Putting guys like George Kell, Freddy Lindstrom, and Tony Lazzeri in the Hall of Fame while you leave out Ron Santo is like putting Dalmatians, Palominos, and Siamese in the zoo while you let the lions roam the streets."

Santo came heartbreakingly close to joining the zoo Tuesday. If just five more of those committee voters had placed him on their ballots, Santo and his diabetes-ravaged body would have been in Cooperstown this summer. Knowing Santo, he would have walked there on his two prosthetic legs. That's how much it would have meant to him.

Instead, those 57 total votes left him with a 69.5 percent election percentage. You need 75 percent to get in. So now he has to wait another two years until the committee votes again. When you're 67, suffer from Type I diabetes, have regular boxing matches with pneumonia and other diabetes-related illnesses, two years is a long, long time.

"I think it will hurt," says Masur of the latest news. "He knows, like everybody else, that he belongs in there with the greats of the game."

Masur is biased, but the numbers aren't. How could those other 25 committee members who cast ballots for player candidates not look at Santo's numbers and recognize greatness? How could they examine the era in which he played -- and the physical circumstances he endured (Santo was diagnosed with diabetes when he was 18, but he kept it secret until late in his career) -- and not ask him to join the HOF Class of 2007?

Santo was a nine-time All-Star and a five-time Gold Glove winner, and he led the National League in walks four times (respect). He batted cleanup in a Cubs lineup that featured future Hall of Famers Ernie Banks and Billy Williams, and during a 13-year period he averaged 25 home runs, 96 RBI and 156 games. He finished his career with a .277 batting average, 1,331 RBI and 342 non-juiced home runs (unless you count insulin shots). His numbers, James once told me, were comparable to some Hall of Fame outfielders and first basemen.

And yet, those credentials somehow aren't impressive enough for the Veterans Committee. Sometimes I wonder if some of those voters have bronze for brains. Santo played with diabetes and still collected 2,254 hits and batted .300 or better four times. Even in 1969, when the Cubs threw up on themselves down the stretch, Santo drove in a career-best 123 runs. 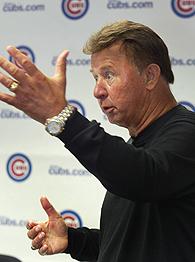 I don't understand how the committee members, many of whom were Santo's contemporaries, could suffer such significant memory loss when filling out their ballots. What's even more puzzling is that Santo creeps closer to the 75 percent standard every two years. In 2003, the first time the restructured committee convened, Santo received 46 votes (56.8 percent). In 2005 he got 52 votes (65.0 percent). This time it was 57 (69.5 percent).

Hello? Santo's statistics haven't changed since he retired after the 1974 season. His numbers were HOF-worthy then, and they're HOF-worthy now.

"The process shows ... that election to the Baseball Hall of Fame remains the greatest honor in the game, and highly selective," said HOF chairperson Jane Forbes Clark in a statement.

Selective? How about highly subjective? And sorry, but when the committee is 0-for-3 on electing anybody to the Hall of Fame in 2003, 2005 and now 2007, it opens itself up to criticism. Maybe it needs to spend a little more time reading the back of baseball cards and a little less time acting like baseball snobs. There's a difference between HOF standards and false elitism.

Meanwhile, Santo begins another two-year cycle of finger crossing. He still has those Cubs fans who adore him. He still has his retired jersey number flying on the Wrigley Field left-field flagpole on game days. He still has his seat in the WGN Radio booth, where he'll take time before or after a game to call diabetes and cancer patients who have e-mailed him. And you should see him when one of those kids visits him in the press box. Santo melts. The only thing they don't get from him is the hair on his head.

"Will you console him, or will he console you?" I say.

Santo will be fine. This latest insult will leave a bruise mark, but it's nothing compared to losing the lower half of your legs to amputation.

Of course, if I'm the Cubs, I do something for one of my own. I break game-day tradition and run Santo's jersey flag up the pole at Wrigley -- today. Sure, it's still February and there's snow on the ground, but sometimes it's the little things that count.

Like the smile you'd get from Santo. You'd see it all the way from Mesa, Ariz.