AUGUSTA, Ga. -- Well, just as we all expected, our 2007 Masters champion took control of the tournament on the back nine and imposed his will on the rest of the field. You've seen it before: the birdies  the fist pumps  the traditional Sunday victory attire featuring a blue vest, blue shirt and long-sleeve white turtleneck.

Yes, he does. He wore a red shirt in his final round at a slightly friendlier Augusta National, but that was about the only recognizable thing about Woods on Sunday. His game wasn't close to being vintage Tiger. It wasn't close to being ordinary Tiger. Or, as he said in the fairway after bungling an iron shot on the 71st hole of the 71st Masters: "Honestly, what the hell just happened?" 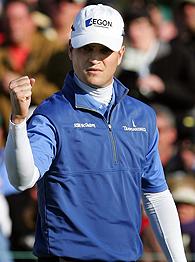 Good question. Woods wasn't Woods, but Zach Johnson was. Johnson is the proud -- and let's face it, totally unexpected -- owner of his very own green jacket because he out-Tiger-ed Tiger. He did everything Woods usually does on a major Sunday, including grinding his golf cleats across the neck of the rest of the field.

"As they say," Johnson said, "giants gotta fall at some point."

But nobody figured Johnson would be the one operating the slingshot. He missed the cut in the last three majors of 2006. His best finish in a biggie was a T-17 at the 2005 PGA Championship. If you had Johnson in your Masters office pool, it must have been a blind draw.

Don't know whether you noticed, but Johnson just beat the best player on the planet. Woods' ATM is the U.S. Mint. He has won 12 majors. By the time his career is done, he'll be the standard by which all golfers are judged.

Then there's this guy in the blue shirt.

Johnson's parents still have the first oversized cardboard check he received while playing on something called the Prairie Golf Tour in the late 1990s. The real check was worth about $2,500. Sunday's Masters victory was worth $1,305,000 and a lifetime tee-off time every April. Nothing normal about that.

"If he's not Superman, who is he?" said his good friend Vaughn Taylor, who tied for 10th. "Superman's brother, maybe."

Weird. Everybody thinks Woods is the guy wearing the Sunday red cape. But this time it was Johnson who got the girl (his wife, Kim, was waiting just off the 18th green), the jacket and the championship Woods craves the most.

Tiger has only himself to blame for going home without a fifth Masters title. He began the day at 3-over-par and ended it in the exact same place. That might have won him the tournament Saturday, when it was iceberg cold and half the players couldn't shoot Arnold Palmer's age. But Sunday, under calmer conditions and with kinder hole locations, an even-par round gets you bubkes. Or in Woods' case, a three-way tie for second place.

Woods had the lead -- and presumably the tournament -- when he birdied the second hole to move ahead by one shot. This would be the beginning of the coronation, right? Clubhouse attendants probably were giving his green jacket a quick steam and press.

Instead, Woods couldn't operate the clutch on his game. He kept grinding the gears, moving from neutral to reverse, reverse to first and second, sometimes third (an eagle on No. 13 to move within one stroke of the lead), but never fourth. He tried to hit the gas, but nothing happened.

The lasting images of Tiger this week will be of his frequent off-fairway visits to Augusta National's pine straw, where on Sunday he snapped the steel shaft of a 4-iron after hitting a tree on the follow-through. He also spent lots of time gritting his teeth, smiling facetiously, swearing, slamming clubs and, on one occasion, spitting after a so-so shot. It wasn't his finest day. Or week -- not one round under par.

Afterward, he blamed what happened Thursday and Saturday (bogeys on Nos. 17 and 18 each of those days) for costing him the tournament. And his security escorts almost fainted when it appeared Woods was thinking about hitting some range balls after Sunday's round was long over. Instead, he got in his car for the exit down Magnolia Lane.

As it turned out, Woods, not Johnson, was the guy who blinked Sunday. Johnson overcame a first-hole bogey, moved into a tie for the lead on No. 13, then flew solo beginning on No. 14. On the 18th hole, when he was off the green in two and Woods was putting for birdie on 16, Johnson responded by sticking his chip shot to within the length of his infant son's pacifier. The kick-in par all but guaranteed him the win when Woods failed to sink the putt on 16.

"It makes it that much more gratifying to know I beat Tiger Woods," said Johnson, who entered the week with exactly one career tour victory.

Well, at least he knew that much. Johnson was so flummoxed by the victory that he said he didn't even know what he shot (69, you kook). He called Augusta National chairman Billy Payne, "Commissioner Payne." And when it came time for the jacket presentation ceremony in Butler Cabin, Johnson thanked so many people it sounded as though he had won a NASCAR event. He even forgot to take off his vest when defending champ Phil Mickelson helped him slip on the green coat.

The Iowa guy who stared down this course, this pressure and this Tiger was a teary-eyed mess by the end of the news conference. "I told myself not to get emotional," he said.

Too late. Of course, you'd be a mess too if you had just beat golf's version of the '27 Yankees.

"I'm beside myself," Johnson said.

So is Woods. But for all the wrong reasons.