SAN ANTONIO -- Trust me, they don't call him "Cheap Shot Bob" in this town. Instead,
Robert Horry, the man whose shoulder shiver helped alter the look and feel of the NBA playoffs, received something Sunday afternoon that you don't see and hear every day: a spontaneous, heartfelt standing ovation that lasted a full 30 seconds.

For checking into the game.

"They just missed him," the Spurs' Michael Finley said of the reception. "As fans, you miss having a valuable part of your team." 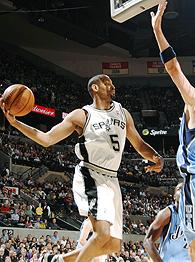 Horry didn't put up much of a linescore in the San Antonio Spurs' 108-100 victory over the
Utah Jazz in Game 1 of the Western Conference finals. But he didn't have to. All he really had to do was show up.

"I'm just happy they accepted me back," said Horry, who can count on exactly one finger the number of times he's gotten a standing O for reporting to the scorer's table. "It was funny."

Or as Jazz guard Derek Fisher, a former Horry teammate with the Los Angeles Lakers, said, "I was actually jealous."

Exiled to David Stern's penal colony for two games, Horry finally returned to the court  and to a hero's welcome. The cheers weren't for his three rebounds, two assists and one blocked shot in 16:32 of playing time. It was for what happened Monday in this same AT&T Center. Phoenix Suns point guard Steve Nash can tell you all about it.

Horry's controversial body check of Nash in the closing seconds of Game 4 sent tremors through the Suns-Spurs series. Horry was suspended for those two games, but it was the one-game suspension of the Suns' Amare Stoudemire and Boris Diaw (for leaving the bench area after Horry's flagrant foul) that created a national uproar.

The short-handed Suns lost Game 5 at home and were closed out here Friday evening.
Afterward, Nash said Stern's decision to suspend Stoudemire and Diaw "will forever haunt us."

It won't haunt Horry. The man previously known as "Big Shot Bob" has a long history of winning championships (no active player has won more than Horry's six NBA titles) and of making plays that matter. But the Nash controversy continues to puzzle him because, he said, he didn't do anything wrong.

"I'm an old-fashioned player, an old-school player who will foul you and foul you hard."

"I'm still amazed at the notoriety that this one play got compared to Baron Davis' foul [against Fisher in the Golden State-Utah series] and Mikki Moore's foul [against Aleksandar Pavlovic in the Cleveland Cavaliers series]," Horry said. "Those were like malicious fouls in my eyes. Guys who can't protect themselves off their feet. Blow to the head."

According to the Horry School of Fouling, his shoulder check on Nash was perfectly acceptable playoff etiquette. That's why he didn't understand why everyone -- Nash, Stoudemire and Diaw, the media -- got bent like a paper clip.

"You know what?" Horry said. "If I had the situation to do all over again, I would still [do it]. That's just the way I'm programmed. You go over there and foul, and you foul them hard. The only thing I wish I could have changed is that it wouldn't have been that close to the scorer's table. Other than that, I'm an old-fashioned player, an old-school player who will foul you and foul you hard."

Nash was a rookie when Horry joined the Suns in 1996. They used to play one-on-one together in the Suns' practice gym. They took drives in the car together. Horry respected Nash then, and he respects him now. But that doesn't mean Nash, or anybody for that matter, gets a free pass in the postseason.

"I think on my part -- and I think [Nash has] been in the league long enough to realize -- it's just basketball," Horry said. "I can understand if I had clotheslined him and tried to hurt him, but that was just a bump. Hopefully, in his eyes, he'll look at it as just basketball and no hard feelings. Because when you're trying to win, you have no friends until you walk off the court."

Horry probably doesn't have many friends in Phoenix, not that he cares. He said Stoudemire and Diaw have only themselves to blame for getting suspended. 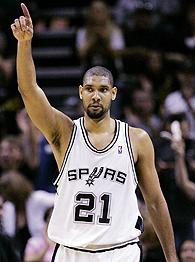 "They complained  like I can get in their heads and play Nintendo with their minds and bodies and get them to walk out onto the court," Horry said.

No, he said, this was about something more basic. This was about the unwritten code of playoff basketball that Horry, now in his 15th season, learned during the 1994 NBA Finals.
The New York Knicks vs. Horry's Houston Rockets. Horry went in for a dunk, and Knicks enforcer Anthony Mason took him out. Horry bounced hard against the wooden floor.

"I had two sprained wrists and a hairline fracture in my ass after it happened," he said. "I knew what had happened, but I was hurt. I got up after that, but it was still painful. You just played on. You don't worry about it. Nobody [from the Rockets' bench] ran over there trying to push and shove, trying to cause anything. It was just a hard foul, and you get up and go."

Nash eventually got up, but it was obvious after the Game 6 closeout loss that he felt the suspensions had denied the Suns a chance to compete on an even level. I agreed and told Horry the best postseason series had been reduced to what-ifs.

Horry scoffed at it.

"Every year's going to be a what-if," he said. "That's the game of basketball. What if a guy turns his ankle? What if a guy gets in a car wreck coming to the arena? There are so many different aspects that could happen that nobody knows. Only the man upstairs knows."

Except that Horry's foul on Nash wasn't an accident. It was done on purpose and with the Suns' victory already assured. Doesn't matter to Horry. The playoff code is the playoff code. And he isn't the only one who thinks that way.

So I asked Horry what he'll do if the same set of circumstances presents itself in the series against the Jazz. Utah guard Deron Williams dribbling down the court  the Jazz comfortably ahead in the final minute  seconds ticking off the game clock.

Horry looks at me as though I've asked him whether he wears socks during the game. Of course he'd foul Williams.

Horry is laughing now. He gets up from the chair in front of his locker and begins to walk away.