Jason Flatt was 16 when he stood alone in his bedroom, raised his father's .38 caliber, stainless steel Smith & Wesson to his head and pulled the trigger. 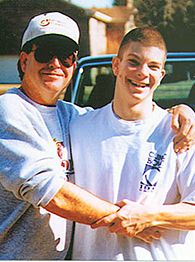 There was no suicide note. The only two things Clark Flatt found that July 1997 day in his suburban Nashville home were the crumpled, lifeless body of his youngest son and, as it turned out, a calling.

Flatt grieved, but he also had an awakening. A close friend had asked, "Do you really understand what happened?" and the truth was, Flatt didn't have a clue. Jason was the kind of kid you gushed about in the Goodpasture High School yearbook. Then one day he killed himself.

"I always thought it was something that happened to other people," Flatt said.

He began running the numbers -- that's what insurance executives do, right? -- and he was stunned by the frequency of teenage suicides. So on a kitchen table in the cramped file room of his insurance office, Flatt held the first meeting of his newly established Jason Foundation. Flatt wanted to teach people about teenage suicide, about the "silent epidemic," as he called it, that claims more than 100 Jasons each week.

But nonprofits usually fail in their first two years. So one of the teenage volunteers suggested they get a spokesperson, someone with a national presence.

"Sure," said Flatt, humoring the kid. "Who do you have in mind?"

Fulmer? This wasn't going to happen. Fulmer was football royalty in the state. Anyway, the Tennessee head coach was knee-deep in spring practice preparation and involved with his own charities. There was no way he was going to be the lead blocker for a mom-and-pop foundation in Hendersonville, Tenn.

But the board made up of teenagers wrote a letter to Fulmer explaining what had happened to Jason and why they needed the UT coach's help. Flatt figured they'd get a form letter back wishing them well.