Unless you were busy cutting hoodie sleeves or had an appointment with Q to receive the latest UHF pen transmitter for your next spy mission, I'm guessing you watched Monday night's Dallas Cowboys-Buffalo Bills game. 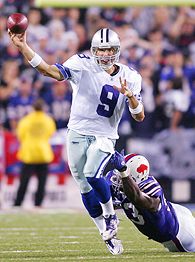 You watched because your undefeated New England Patriots play the undefeated (barely) Cowboys this weekend in Irving, Texas. And you watched because, like the rest of us, you wanted to see the guy (Tony Romo) who wants to be like your guy (Tom Brady).

Let's be honest. Five years ago you probably thought Tony Romo was a barbecue rib restaurant, not an undrafted free-agent quarterback from Eastern Illinois University. He was a nobody. If Quincy Carter hadn't pressed the self-destruct button on his career in 2004, Romo might not even be on the Cowboys' roster. That's how thin the line was between obscurity and celebrity.

Don't feel bad about not knowing his backstory. Even the Cowboys can't get it right. Their own team Web site details his unlikely rise to NFL fame after "a prolific collegiate career at North Illinois.''

There is no North Illinois. In fact, there was barely a Romo until 50 weeks ago.

Oct. 29, 2006, is when he made his first NFL regular-season start. The Cowboys won the game. They've won lots of games since Romo replaced Drew Bledsoe about a year ago. They've won them because of Romo and sometimes in spite of Romo. But they win.

You saw what he did against Buffalo. (By the way, memo to you: If you ever want to buy an NFL franchise, this is the one. The team's already named after you.) Romo was beyond terrible. He threw not one, not two, not three, but five interceptions. And it could have been six, maybe seven INTs if the Bills' defenders didn't have anvils for hands. Plus, he fumbled once.

But I bet you leaned forward in your chair to see how he'd handle those six turnovers, an eight-point deficit with 24 seconds remaining, and a hostile crowd that about six hours earlier had egged the Cowboys' team buses as they drove single file down Abbott Road toward Ralph Wilson Stadium. Plus, he had a national "Is It Monday Yet'' TV audience watching the whole thing.

"I'm always thinking we're going to go out and score on the next drive,'' Romo would say later. "You don't have to worry about that with me, that's for sure.''

So as Cowboys fans poured out of the stadium in the waning minutes (I saw them, Bill -- it was embarrassing), Romo must have reminded you of your boy Brady. Hook him up to an EKG during the last two crucial drives and Romo would have flatlined. When it mattered most, he was stressed the least.

You know the feeling. Maybe you've said to Brady what Cowboys coach Wade Phillips said to Romo as they stood on the sideline late in the fourth quarter: "Wouldn't it be amazing if we won this game?''

But Romo completed nine of 11 passes on a touchdown drive that pulled the Cowboys to within two points with 20 seconds left to play. Then, when the Cowboys somehow recovered the ensuing onside kick, he drove Dallas just close enough for rookie Nick Folk to kick the 53-yard game-winner not once (the first one was nullified by a Bills timeout), but twice.

Romo's teammates knew you were watching this game. Even without cheating with a sideline video cameraman, you're one of the game's best at identifying tendencies and weaknesses. So of course you saw Romo's tendency to throw into cleverly designed Bills pass coverages. You saw his inability to identify those coverages. And you saw him commit mistake after mistake.

But he regrouped. He held himself and his team together. And he won.

"A lot of quarterbacks, a lot of players, would have given up and moved on to next week,'' Cowboys tight end Jason Witten said. "He didn't do that.''

Last week, Chicago Bears star linebacker Brian Urlacher told NBC that Brett Favre was "an old Tony Romo.'' Weird, since Romo, who grew up in Burlington, Wis., always wanted to be a young Brett Favre. Or more accurately, a combination of Favre, Johnny Unitas and Brady. Anyway, it was one of the great compliments Romo will ever receive.

Cowboys coaches and teammates adore this guy. When someone asked Phillips if he ever considered benching Romo after his fifth interception (an apparent game killer with less than six minutes left to play), the coach said, "Well, he didn't throw six ''

And you would have loved Romo's reaction when asked about Phillips possibly making an in-game switch.

"I don't think he was getting to that point,'' Romo said. "I think I've shown him enough that he knows I can come back from a lot of stuff.''

He said this with a fresh welt on his right cheek and another bright red welt just above his right eye. When blood started to sneak out of a cut near his knuckle, he just sort of sucked the stuff away. Tough guy. Just like Brady.

"I think the biggest thing they saw is this kid never gives up,'' Witten said. "He's a fighter, a winner. That's what he's about. I think Belichick knows that. I think the whole league knows that. If they didn't, tonight was a great way to show it.''

I'm sure you'll devise some defenses to mess with Romo's mind, and you'll do it with a better secondary than the patchwork (but tough) group the Bills were forced to use. That's your specialty.

"My confidence doesn't waver,'' he said later. "That's one thing I learned with Bill and everyone else. Wade says it all the time too. You got to keep going.''

You and the Patriots are next. So the question becomes: Are you ready for some Romo? Because I guarantee Romo will be ready for you.

Gene Wojciechowski is the senior national columnist for ESPN.com. You can contact him at gene.wojciechowski@espn3.com. He co-authored Jerome Bettis' autobiography "The Bus: My Life In and Out of a Helmet," which is available now.