His Cardinals -- and this is damn near impossible to do -- have just lost a game to the unbeaten Chicago Bears after forcing six turnovers, not allowing an offensive touchdown and leading by as many as 20 points late in the third quarter. The Cardinals control the ball for nearly 40 minutes and limit the Bears to nine first downs. 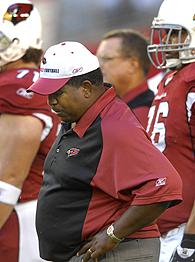 And they lose! Lose! I watched the whole thing, and more than a year later I still can't believe it. It's one of the great football collapses of our time, a career low point for a coach who would rather sip phlegm than lose a game like that.

But that's not what we remember. We remember Green walking grimly to the podium for his postgame press conference, keeping it together for a few moments, and then watching his head explode on national TV.

"The Bears are who we thought they were!"

"You know what," says Green, from his San Diego-area office, "I had had it. We had had a run of such bad luck that I was at a boiling point. Maybe if I had had an extra 10 minutes, maybe I would have calmed down. But I don't even know if 10 minutes would have made a difference."

Thank God he didn't wait. Instead of pure, undistilled emotion, we might have gotten the usual Bill Belichick-like postgame mush. And you don't see anyone rushing to do a TV endorsement gig with Coach Hoodie, unless Sony or Panasonic have called about its camcorder line of products.

Green is on TV more than Oprah these days. Who knew you could begin your career as a football coach and end it cashing checks from Coors?

"I would say this: This caught on," says Green, who is trademarking the phrase. "I wouldn't say it's more important than winning 117 [NFL] games, four division titles, drafting Randy Moss, coaching Jerry Rice  I've done a few things in my career."

Green didn't invent the phrase that night after the Bears loss. A day earlier, during a meeting with the MNF announcers, Green reminded the crew of the Cardinals' 23-16 preseason win against Chicago. Sure, the game didn't count, but Green liked the way his team had played against the Bears, liked the matchups, and liked his chances less than two months later.