Epiphanny Prince had suggested that she was suffering boredom with the basketball season, that the mild tests of her prodigious talent within the New York City public school league had been too rare. Apparently, that's all it takes for a coach to indulge a prodigy now. The kid's bored, so let her have her way. The kid's bored, so let's beat up a bunch of weaker kids by 105 points. 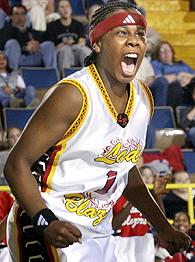 "We play the schedule we're dealt and some of those teams are weak," Bergtraum High School coach Ed Grezinsky told the New York Post. "But I didn't think I should punish Epiphanny for that."

It isn't punishment to teach a great young basketball talent that the games aren't played to keep her interested, that the rules of sportsmanship and manners aren't eliminated for the sheer reason that she could score every time she touched the ball. So, the coach let her go on a night when she was determined to chase Kobe Bryant's 81 points and ended up passing Wilt Chamberlain's 100 with room to spare.

Yes, Prince started beating up one of the PSAL's weaklings on Wednesday and didn't stop until she'd scored 113 points, until the final beat-down was 137-32. Let's face it: Steve Spurrier would've been embarrassed to leave Epiphanny Prince in the game.

Prince, a top recruit signed to go to Rutgers, made 54 out of 60 shots. This tells you the kids on Brandeis were defenseless to stop her. Brandeis was missing its best player, but that probably wouldn't have made much difference. Those poor kids sent Prince to the free throw line just once, suggesting that they were too intimidated to physically confront her.

"It probably would've been more newsworthy if the 10th player on her team had scored double figures in that game," legendary Jersey City St. Anthony coach Bob Hurley said Thursday. (Editor's note: Wojnarowski wrote a book on Hurley's St. Anthony team.) "I have no idea what the intent was, or what was accomplished here. It's lost on me."

It should be lost on everybody. Prince bettered Cheryl Miller's 105 points and Lisa Leslie's 101 (Leslie's opponents literally headed for the bus at halftime). But she doesn't have the girls national high school scoring record now because she was more capable than those gunners who came before her. She has the record for the simple reason that Grezinsky lost his way as an educator and turned into an enabler. A lot of boys and girls players could've done this against overmatched teams in the past, but almost all showed restraint.

Brandeis' coach, Vera Springer, suggested to the Post that Grezinsky's motivation had been to deliver notice of Prince's superiority over rival Christ the King High School star Tina Charles. If that's the case, maybe Prince should've hit the buzzer shot to beat Charles and Christ the King in mid-January at Madison Square Garden.

Only, the winning shot was hit by Charles, the nation's No. 1 player.

Only, Christ the King won the game.

Those are the games, the moments, where great players distinguish themselves, where true legacies are made in high school basketball. If Grezinsky thinks this is the way to prepare a top prospect for life in the Big East at Rutgers, he's let Prince down.

Just last week, too, the Nets' Vince Carter was ripped for warning everyone of the possible trickle-down repercussions of Kobe's 81 points, but he was right. Kids are led to believe more and more that the measure of success is how much you can take on the floor, not how much you can give.

At least Bryant and the Lakers were losing at halftime of that game, at least -- on some level -- Kobe went wild within the context of trying to win the game. And at least the Raptors should've been expected to put up some kind of a fight, the way the Brandeis girls had no chance to do.

"When we get up 20 points, we're already asking the scorekeeper who has double figures, and those are the kids we'll start taking out of the game," Hurley said. "If anyone at St. Anthony is going to break a scoring record, it's going to be in a big game.

"Sometimes, you've got to put yourself in the uniforms of the kids on the other side of the court."

Brandeis High School was helpless to stop Prince, the way a lot of inferior high school teams are and always have been against an All-American talent. Sorry if Epiphanny Prince has grown bored with the season, but that's life for a big basketball star. And that's where it's the coach's job to teach a life lesson, not indulge an immature whim.

Adrian Wojnarowski is a sports columnist for The Record (N.J.) and a regular contributor to ESPN.com. He can be reached at ESPNWoj10@aol.com. His new book, The Miracle Of St. Anthony: A Season with Coach Bob Hurley And Basketball's Most Improbable Dynasty, is available nationwide.