I don't know Nancy Zimpher from Nancy Kerrigan, but I'm not going to pick a fight with her anytime soon. She might be the toughtest Ph.D.-toting woman in academia.

When you can take down Bob Huggins, in his own backyard and over his dead body, you've got some steel in your spine. 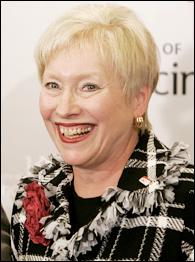 And that's the most striking aspect to the shocking story that broke Tuesday. A university president stared down an athletic icon, and won the battle. Huggins, arguably the most powerful and well-connected guy in Cincinnati, got smoked in a public fight with an academician who's been in charge at UC for less than two years.

In a world where presidents and athletic directors timorously hand over contract extensions and raises every time a coach clears his throat and utters the magic words -- "If I don't get it, it will hurt us in recruiting" -- this was a strong stand. A stand that said the school administration is in charge of the athletic fiefdom.

Specifically, this was a stand that said it's time for flashing police lights to stop pursuing the program -- both the players and the coaches. It's time for UC basketball to stop being an academic punchline (a change that actually has been ongoing under Huggins in recent years). It's time for the program that brought college basketball Dontonio Wingfield (did time for assaulting two cops responding to a call that he was allegedly beating his girlfriend), Donald Little (assaulted and allegedly tortured his roommate), Shawn Myrick (did time for sexual battery), Art Long (famed police horse puncher) and so many other Eagle Scouts to do better.

Other schools interested in stopping the tail from shaking the dog silly should study what happened at Cincinnati. Perhaps other presidents who have felt handcuffed by their big-name coaches will now feel empowered.

The university informed the winningest basketball coach in its history that he had 24 hours to decide how he wanted the pink slip to read -- firing or resignation. Zero hour is 2 p.m. Wednesday. That ultimatum came in the form of an acerbic letter that the school released to the media Tuesday afternoon, with the following cheery saluation in the first paragraph:

"This letter represents the University's best and final offer regarding the manner in which Bob Huggins will cease coaching Men's Basketball at UC."

(You really didn't think Mr. Combative was going out receiving rocking chairs on a retirement tour from Xavier and Louisville, did you? The ironically nicknamed Hugs was destined to go down in a duel -- with someone -- at 20 paces.)

Actually, this had been building for more than a year, ever since Huggins was busted for drunk driving. It was after that embarrassing episode when Zimpher terminated the automatic rollover in his contract, sparking speculation that she'd just as soon see the winningest coach in school history do his work elsewhere.

Huggins came back from a forced leave and coached last season. But on May 11, university officials told him that his contract would not be extended beyond 2007, and suggested a list of ways in which his tenure could come to an end.

In other words: Thanks for your 16 years of service, Huggs. Now scram -- in a manner of your choosing, of course.

As word leaked and Cincy talk radio melted down, the ensuing behind-the-scenes wrestling match must have been something. As his future hung in the balance, the grapevine was rife with talk about Huggins marshaling forces among the basketball program's powerful boosters and having them send a message to Zimpher: If Huggs goes, so does our money.

There seemed to be a bravado at work here that suggested the prez didn't know what she was getting into -- that she'd picked a fight with the wrong guy.

Turns out the opposite was true.

On May 16, Huggins held a news conference and said he would honor the rest of his contract -- a public airing that did not sit well with Zimpher & Co., according to the letter released Tuesday. After a brief détente, UC says in the same letter that Huggins' people resumed agitating in July for a contract extension. The answer remained no.

The only option left was formally delivered Tuesday: resign or be fired.

It's a bold and risky move by Zimpher. Huggins is far more entrenched and far more popular in town. He has a vague charisma that wins people over (except for those he completely alienates). He wins like clockwork (14 straight NCAA Tournament appearances).

And, most of all, this is a crucial year for the athletic department.

Cincinnati enters the Big East trying to prove it belongs. The Bearcats figure to be fighting uphill in football and several non-revenue sports. Basketball was the meal ticket -- and the Bearcats needed to be ready to perform right away, in a 16-team Godzilla of a league that will be the toughest in the nation.

With Huggins out, reportedly to be replaced on an interim basis by assistant Andy Kennedy, the Bearcats are risking implosion in their signature sport. But it was a risk Zimpher was ready to take.

We'll see how much political capital she expended in this battle. If you look at the history of high-profile president-basketball coach standoffs, you see a couple of pyrrhic victories for academia.

Myles Brand departed Indiana shortly after he forced out Bob Knight (it should be noted that Brand gave Knight multiple exceptions to his "zero-tolerance policy" before finally showing him the door). David Roselle, who made Kentucky tell the truth to the NCAA during its basketball scandal in the 1980s, didn't last long in Lexington after that -- and said the fallout from that contentious episode made his job untenable.

In terminating Bob Huggins, Nancy Zimpher might have started the clock on herself. But she showed the toughness, leadership and authority that a president should when dealing with the athletic fiefdom. Score this one a victory for the eggheads.