Coaches And Contracts
Charlie Weis (1) got himself the fattest contract in college football history last week, a 10-year deal reportedly worth nearly $40 million. While The Dash is an unabashed fan of every move Weis has made as a rookie head coach -- from the won-lost record to the strategies to the motivational stuff to the Montana Mazurkiewicz gesture to the postgame visit to the USC locker room -- this is a dramatic escalation in the College Sports, Inc., fiscal spiral.

Chew on this for a minute: Last December, Charlie Weis was no better than fifth (and maybe sixth or seventh) on the Notre Dame coaching wish list. Today he's worth more money than anyone who's ever walked a college sideline.

Admittedly, when the competition is the NFL, the bidding is automatically inflated. And Notre Dame athletic director Kevin White's proactive approach shows that the Fighting Irish are not operating in Golden Dome FantasyLand anymore, where no job could compete with their job.

But consider the ripple effect. If, after seven career games, Weis is worth $40 million, what could Pete Carroll (2) ask for at renegotiation time? A throne and scepter? How about other guys with championship rings such as Jim Tressel (3) and Bob Stoops (4)? How about guys who win big every year and are in the national title chase this year such as Frank Beamer (5) and Mack Brown (6)?

And what about the Ty Willingham Factor (7)?

The Dash does not believe Notre Dame is a racist institution. But if you were predisposed to view the school's recent coaching actions through the prism of race, here is what you'd see:

This smacks of administrative amnesia, as if the folks forgot how quickly the giddiness went sour three whole years ago. And it ratchets up the pressure. Simply put, to justify this move, the Notre Dame administration had better be absolutely convinced that Charlie Weis can and will win a national title (or three). The bar is set that high.

That said: The Dash is convinced that Weis is off to a better start than Willingham, regardless of first-year record.

Weis' first team looks ultra-prepared and fully competent, whereas Willingham's first team looked inspired but largely lucky. Had Notre Dame played USC in midseason in '02 instead of at the end, it still would have been a balloon-bursting rout. This year, it was as ennobling as a loss can possibly be.

The second selling point is recruiting. Weis, Super Bowl rings flashing on his fingers, is hauling in commitments left and right. Willingham's recruiting was surprisingly ineffective.

And the final point is understanding the intangibles that make Notre Dame unique. Weis gets it, as only a former student can. Willingham never fully did. 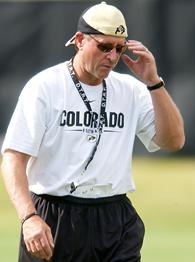 But the money thrown at Weis is breathtaking, and the school's recent history with coaches is wildly inconsistent. The answer to the inevitable question -- why was Ty Willingham treated so differently from the white coaches who came before and after? -- had better be good.

Speaking of contracts: Gary Barnett (8) began this season with two years remaining on his deal at Colorado. He had a new athletic director to impress. He had more fallout from the 2004 recruiting scandal to endure.

That's normally the kind of thing that makes coaches break out in hives and camp out on the athletic director's doorstep in search of reassurance, saying they cannot go on without at least four years on their deal. Barnett chose to hunker down and win enough games to earn an extension, a great example of performing under pressure.

The Buffaloes are 6-2, and they'll clinch a tie for their fourth Big 12 North title in Barnett's seven years if they beat Missouri Saturday. Expect a new deal to be forthcoming before the season is over -- perhaps before the month is over. Just don't expect it to be worth $40 million.

A November To Remember
Welcome to the set-up month -- the month that will begin deciding the BCS positions and the bowl lineup. Dec. 3 stands to be one of the bang-up days in recent memory, but there are a bunch of important games that will get us from here to there. Here's The Dash's Top 10 matchups of the next month, in reverse order:

Fresno State at USC, Nov. 19 (9): Nobody will give the Bulldogs a chance in this one, which suits Pat Hill (10) just fine. The combative coach has been waiting for his shot at the big boys in his home state, and he'll have a very good, physical, solid Fresno team ready. With the Trojans' winning streak on the line, every USC game is a must-monitor.

Tennessee at Notre Dame, Nov. 5 (11): The two Cadillac programs speeding in opposite directions. The Volunteers are slipping into the abyss, while the Irish are returning to glory. Notre Dame needs to win out to earn its first BCS bid in five years, and even though the game at Stanford to close the season will be tricky, this should be ND's toughest test on its way to 9-2.

Ohio State at Michigan, Nov. 19 (12): This doesn't figure to pack the wallop of so many Buckeyes-Wolverines games past, but it's still big. Ohio State could still be right in the BCS mix when this game is played, while underachieving Michigan's Spoiler Tour of the Big Ten could end with a flourish right here.

Florida at South Carolina, Nov. 12 (13): If you fail to see the story lines in this one, you drank yourself blind at the Cocktail Party game. The Head Ball Coach (14) takes on his old ball team -- which most folks figured would be his current ball team, until negotiations fell apart about a year earlier. Urban Meyer (15) has the task of beating Steve Spurrier or never hearing the end of it.

Alabama at Auburn, Nov. 19 (16): The Iron Bowl could be pure gold for the Crimson Tide. A berth in the SEC championship game and the BCS could both be there for the taking, in the most all-consuming rivalry in college football. Just last year, it was Auburn in that same situation.

Wisconsin at Penn State, Nov. 5 (17): The Big Ten title will be in the balance at Beaver Stadium, as well as two of the leading feel-good stories of the season. Does Barry Alvarez (18) go out in a blaze of BCS glory, or does Joe Paterno (19) finalize his argument that 78 is not too old to kick butt?

USC at California, Nov. 12 (20): No opponent has stood up better against the ongoing Trojan dynasty than the Bears, who won everywhere but the scoreboard last year and were the last team to beat USC, in 2003. This Cal team isn't as good as those, but it still poses a clear and present danger to the USC winning streak.

Texas at Texas A&M, Nov. 25 (21): By the morning after Thanksgiving, the Longhorns should be two games away from the Rose Bowl. The question is whether crashingly disappointing Aggies coach Dennis Franchione (22) is one game away from being Unemployed Floyd -- or perhaps one season away. Huge rivalry game could have huge consequences for both sides.

LSU at Alabama, Nov. 12 (23): Why is Alabama-Auburn way up the list? Because this game is bigger, earlier. At stake is SEC front-runner status, and much more. A Crimson Tide win strengthens its BCS hopes, and its argument for Rose Bowl inclusion. A Tigers win stamps a new straw boss in the SEC, legitimizes Les Miles (24) in Baton Rouge and shakes up the BCS Standings in a big way.

Miami at Virginia Tech, Nov. 5 (25): This is No. 5 at No. 3, with all kinds of BCS implications in the balance. Winner can feel optimistic about playing in one of the big four bowls, and retains hope of playing in Pasadena. Both first-year starting quarterbacks -- Marcus Vick (26) and Kyle Wright (27) -- will be looking at the best defense they've ever seen.

College Town Cribs
Dashette Elena Dementieva (28) was quizzing the worldly Dash the other day, trying to find out which BCS conference towns are worth visiting and which are glorified cow pastures. 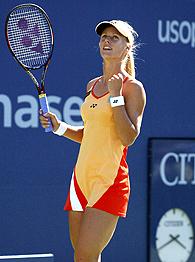 For reference material, The Dash referred Elena to a Coldwell Banker survey, which used something called a Home Price Comparison Index to measure "average home values for a single-family dwelling in a middle-management community measuring approximately 2,200 square feet with four bedrooms, two and one-half baths, a family room [or equivalent] and two-car garage."

The bottom line on that survey: generally speaking, the more affordable the housing, the less you want to live there.

Starkville, Miss. (30). Home of Mississippi State. Average price: $169,433. And you get a free cowbell with each home purchase.

South Bend, Ind. (32). Home of Notre Dame. Average price: $173,600. Like Duke, they plunked a prestigious institution and an idyllic campus in the middle of a grimy town.

Knoxville, Tenn. (33). Home of Tennessee. Average price $175,250. That price may vary, with Randy Sanders putting his house on the market any day now.

And the five most expensive spots:

Palo Alto, Calif. (34). Home of Stanford. Average price: $1.55 million. You can buy nearly 10 houses in Lubbock for what one costs here. But getting that far away from Bob Knight might be worth it.

Los Angeles (35). Home of USC and UCLA. Average price: $1.27 million. That might also be the cost of two scalped 50-yard-line seats for the Bruins vs. the Trojans this year.

Chestnut Hill, Mass. (37). Home of Boston College. Average price: $811,525. For that much money and that little warmth, you should get a free reenactment of Flutie-to-Phelan in the backyard once a year.

Evanston, Ill. (38). Home of Northwestern. Average price: $674,250. If you get the right degree here, you can afford a home by the lake and a vacation home where the weather is much nicer.

Putting Out An APB For
Penn State strongman fullback Matt Suhey (39), who ran the ball well and wore his neck roll even better. If anyone knows the whereabouts of the man whose full name sounds like a New York Yankees slugger's surname, please advise The Dash.

Meanwhile, The Dash is pleased to report that last week's subject, Georgia wide receiver Lindsay Scott, is alive and well and living in Valdosta, Ga. Scott has had his bumpy times, doing little as a New Orleans Saints first-round pick and reportedly having done a stint in drug rehab years ago. Today, according to a recent story in the Atlanta Journal-Constitution, the hero of the 1980 Cocktail Party game has a temporary maid service and lives with his wife and three children.

Point After
When seeking nightlife in Jacksonville, Fla., The Dash recommends a pint at Fionn MacCool's Irish Pub (40) on Jax Beach. After a long day of low comedy watching fans spar and act silly at the Gator Bowl, this is a good spot to unwind. (Among the many signs seen outside the bowl were two classics proferred by Georgia fans. One: "Show us your boobies or the terrorists win." The second was a mullet scoreboard, which had Florida fans leading Georgia fans, 21-2. Had they done the tally at a NASCAR race, it would have looked like an NBA score.)