Question of the Day:

Was Bryant Gumbel's necktie restricting the air flow to his brain during a recent episode of "HBO's Real Sports?" 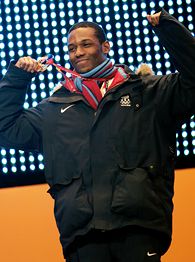 I hope so. Otherwise, Gumbel has some 'splaining to do for his dissing and dismissing of the shusshing and wusshing that goes on at the Winter Olympics.

After saying he dislikes the Winter Games and refuses to watch them, Gumbel casually mentioned, "So try not to laugh when someone says these are the world's greatest athletes despite a paucity of blacks that makes the Winter Games look like a GOP convention."

Gumbel then took a blowtorch to figure skaters, calling them, "pseudo-athletes," mocking their "kiss-and-cry area," and criticizing a system under which a "panel of subjective judges decides who won."

OK, let's count the number of true statements made by Gumbel. It won't take long.

Yes, Bryant, there is a paucity of blacks in the Winter Games. Lillehammer was mostly lily white in 1994. Same for Nagano and Salt Lake City. And, there isn't much color in Torino, either.

But Gumbel's not watching the snow-and-ice edition of the Olympics because there aren't enough blacks is like me saying I'm going to boycott the NBA All-Star Game because there aren't any white-American players (the fifth time in the last eight years, according to Michael Wilbon's research). It's a cheap argument, filled with more holes than Johnny Weir's fishnet costume.

Look, I don't know why there aren't more black winter Olympians. Geography? Culture? Economics? I'm also guessing not a lot of kids, black or white, put their heads on their pillows hoping that one day they can medal in curling. And if they do, how much does a whisk broom cost?

If you want to ignore the Olympics because you can't pick Latvia out of a police geographical lineup, or you think the biathlon is an alternative lifestyle, or you're convinced skeleton is the dumbest sport ever invented, then, please, stick a fork in Bob Costas and the NBC fireplace set.

But to do a Gumbel and reach for the TV clicker based on contestant color is ignorance personified.

I'm no ringhead (that's what regular sportswriters call Olympic beat writers), but Austria's Thomas Morgenstern sure looked like the world's greatest ski jumper during his gold medal win in the men's K120. The guy was in the air longer than some commuter flights. Just because he happened to be white didn't ruin it for me. And as far as I know, there isn't an anti-black ski jumping conspiracy in place, is there?

Chicago's Shani Davis became the first African-American to win Winter Olympic individual gold. Is his victory any less meaningful because there weren't any other blacks in the 1,000-meter speedskating competition?

Is it Norway's fault that its population is more than 90 percent Caucasian, and that Norwegians know how to ski better than Bode Miller these days? Their medals have more to do with skill level, not skin color.

And I don't recall Gumbel, who adores golf, popping off about the paucity of blacks when he hosted NBC's coverage of the PGA Tour in 1990. Does he boycott watching the majors because Tiger Woods is the only African-American on a Tour that is whiter than a sleeve of Titleists?

I'm not watching much of these games, but it isn't because I think ice skaters are pseudo-athletes. They're athletes. Period. OK, they're athletes in sequins and chiffon, but they do amazing things on a blade of steel not much thicker than the width of Gumbel's collar stays.

As for the kiss-and-cry area, Gumbel should know better than anyone that those post-skate reactions are what producers call "good television." They have the same things in baseball. They're called dugouts.

And while we're on the topic of getting in touch with your soft side, Davis wore a White Sox cap and held a stuffed toy bear during his victory lap in the 1,000. Gumbel is probably anti-stuffed toys, too.

Yes, Bryant, there is also a panel of subjective judges who sometimes do ridiculous things. Guess what, G-man? The same thing sometimes happens in the diving competition at the Summer Olympics. Remember? You anchored NBC's coverage of the 1988 Summer Games in Seoul.

Of course, the same subjective calls are made by refs during your beloved March Madness. And in baseball by umpires. In football (Seattle Seahawks fans will fill you in) by line judges. And by rules officials in your precious golf. Gonna tune those out, too?

If Gumbel does indeed ditch the Winter Olympics every time they light the flame, then he's missed some hellacious moments: The Miracle on Ice at Lake Placid ... Eric Heiden's five golds at those same 1980 Games ... Bill Johnson winning the 1984 downhill (memo to Bryant: "Real Sports" just did a story on Johnson) ... Great Britain's Michael "Eddie The Eagle" Edwards surviving the ski jumping competition at the 1988 Calgary Games ... Bonnie Blair winning gold at Albertville, and a unified Germany in the 1992 Games ... Tonya and Nancy at Lillehammer, along with Dan Jansen's gold ... Picabo Street's gold at Nagano ... Sarah Hughes' figure skating stunner at Salt Lake in 2002 ... and now Davis' gold at Torino.

You want to stiff the games, Bryant? That's fine. Just come up with a better reason, will you?