The other 11 University of Miami players and 18 Florida International University players who took part in Saturday night's horrifying football gang warfare? Suspended for the remainder of the season.

Miami's 35-0 "victory" against FIU? Nullified. Wiped off the books.

Something has to change at Miami, beginning with the punishment. Atlantic Coast Conference commissioner John Swofford meant well when he initially issued a one-game suspension for all 13 UM players involved in this disaster area, but the penalty was laughable. It isn't a slap on the wrist; it's a soothing caress and manicure.

"These suspensions send a clear and definitive message that this type of behavior will not be tolerated," said Swofford.

No, they didn't. They sent a clear and definitive message that you miss only one game if you do what Reddick did, which was swing his five-pound helmet at FIU players like it was a medieval weapon. Had he connected with skull or flesh, he could have killed somebody. Then what would have the ACC done? Two-game suspensions?

But, to their credit, the conference and UM came to their senses and announced late Monday afternoon that Reddick was suspended indefinitely. Indefinitely is better than one game, but not as good as gone forever.

Sorry, Larry, but your 11-Strikes-You're-Out policy has become Wanda Sykes-funny. Remember, this is the same Coker who recruited and signed Willie Williams, whose police record was longer than a goalpost upright. This is the same Coker who watched his team brawl with LSU players at last December's Peach Bowl, who watched his team stomp on the Louisville logo last month and who said he had no clue Saturday's brawl had escalated into fear-for-your-life status.

If I'm UM President Donna Shalala, I thank Coker for his years of service and then drop-kick him out of Coral Gables. Rehire Butch Davis, one of the few Miami head coaches who actually knew what "zero tolerance" meant. Hell, see if The Rock is available. He has recent experience. Anybody is better than Coker, whose Vaseline grip is useless.

Instead, the well-respected Shalala did nothing except issue the obligatory statement decrying the game's "embarrassing display of unsportsmanlike behavior." A Monday morning meeting with the executive committee of the school's board of trustees resulted in nothing more than an undeserving vote of confidence for Coker.

What Reddick did with his helmet was so far beyond unsportsmanlike that you need Mapquest.com to chart it. It was criminal conduct. It was obscene. The stomping of an FIU player by Meriweather was only marginally less disturbing. 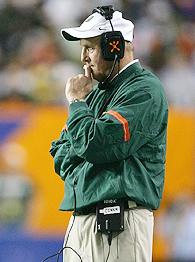 Shalala said she was "satisfied" with the ACC's penalties. If so, Shalala needs a refresher course on leadership. The melee, as one conference commissioner told me Monday, was "mob violence under the guise of intercollegiate athletics."

A line was crossed Saturday night. Crossed, and cleared by a terrifying mile. What began as childish trash-talking soon became physical confrontation, then a series of escalating cheap shots, then street fighting. It reached nauseating critical mass with the sight of a 6-foot, 205-pound Division I-A athlete swinging a helmet at someone with the intent to injure.

This wasn't a simple bruise mark for Miami and FIU. This was something more grotesque, something that made you question what kind of people these players were.

FIU's players were just as despicable, and Strock is just as accountable. Your team, your watch, your responsibility. But this is the first time Strock's program has gone psycho. For Coker, it's one in a continuing series of embarrassments.

Adding to the absurdity was Miami TV analyst Lamar Thomas, a former Hurricanes player, who tried to justify the melee as it unfolded (Thomas was relieved of his duties by Comcast Sports SouthEast early Monday evening).

"Now, that's what I'm talking about," said Thomas, as he endorsed the fight on live TV. Moments later, he said, "I was about to go down the elevator to get into that thing."

If I were UM athletic director Paul Dee (and I'm glad I'm not), I wouldn't let Thomas read the daily lunch menu over the school intercom system, much less let him see the working side of a microphone again.

There is no justification for what happened Saturday evening. There is no right, just lots of wrong. That's why Shalala ought to offer to declare the score null and void. In essence, admit that the game itself ceased to exist once the brawl began. In its place was an aftermath, a mere shadow of itself.

It would be an unprecedented gesture, but the proper one. Miami, which is trying to reach a bowl, wouldn't be credited for a tainted victory. After all, since when do you reward a team for humiliating itself?

"I can promise you that this will never happen again," Strock told reporters.

But did you see who didn't make the same vow? Coker.

Can you blame him?