ATLANTA -- A tournament official carrying a worn, taped-up cardboard box walked to the second row behind the Florida bench and placed the package under the press row table. This is where the national championship trophy sat for most of the final 6 minutes and 17 seconds of Monday evening's Final Four title game: under a blue-curtained table and under the watchful eye of a security guard as the Gators put the finishing touches on hoops history.

It wasn't the greatest championship game you'll ever see, but it was one of the greatest teams you'll ever see win it. Not goose bump great. Not plays-of-the-day great. But the kind of understated, elegant greatness that comes when five players act as one.

A two-peat, the first since Duke did it in 1991-92, will have to do for now. That's too bad because the Gators could have been -- probably would have been -- good enough for the Chris Berman special: back, back, back. Think about it: three in a row. That hasn't been done since Bill Walton was employed by UCLA in the early 1970s. 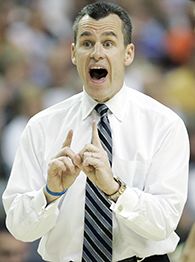 Sadly, Florida's run is finished. It doesn't have to be. Joakim Noah is still a junior. So is Final Four Most Outstanding Player Corey Brewer. So is Al Horford. So is Taurean Green.

"With the Gators, you never know," said Brewer on the Georgia Dome court a few minutes after Florida beat Ohio State, 84-75. "If one of us stays, we all stay."

They're not staying. Noah, Brewer, Horford and probably even Green will be in NBA unis next season, not Gators blue and orange. They did their three tours of duty at Florida and leave with two championship rings. In fact, Brewer all but made the farewell official when, long after midnight had come and gone, he sat outside the Gators locker room and amended his earlier statement.

That's how the Gators do things. They're a package deal. It was that way last year, when they stunned you, me, the NBA and maybe even Florida coach Billy Donovan by returning in unison. Now they'll leave Gainesville as a foursome -- a fivesome, if you count senior starter Lee Humphrey. Or a sixsome, if Kentucky somehow convinces Donovan to leave Gainesville. (Post-it note to Kentucky AD Mitch Barnhart: You might want to consider Candidate Plan B.)

"I sit up here very, very humbled because I think I was fortunate enough over the last two years to coach a group of guys that has to go down in history as one of the greatest teams of all time," Donovan said. "I'm not saying they were the most talented. I'm not saying they were flawless. But when you talk about the word 'team'  they have got to go down and be considered, in my opinion, one of the best teams to ever play."

He's right. A two-peat these days is worth at least a three-peat, maybe a four-peat, in UCLA's dynasty days. There ought to be an asterisk next to Florida's name in the 2008 NCAA Final Four Records Book. It should read: We can't believe they did it, either.

Nobody stiffs the NBA, first-round picks and millions of bucks for that schmaltzy "One Shining Moment" song. But Horford, Noah and Brewer did. They jumped on the scorer's table and held up two fingers, as in two-peat. Later, they took turns climbing an aluminum ladder and snipped away at the net as if it were Noah's ponytail.