Boise State joined the college football big time in 1996, hoisting itself up to what was, in simpler times, called Division I-A from what was then Division I-AA.

On Jan. 1, 2007, the Broncos upset Oklahoma 43-42 in a Fiesta Bowl game that ranks among the most thrilling in the history of the sport.

That established Boise as the fruition of smaller schools' wildest dreams about upward mobility in college football. The colder and more common reality can be found at the bottom of our rankings of 119 Division I-A teams over the past 10 years.

Look at the have-nots and you can see that Boise is the ultimate exception to a hard-and-fast football rule: Upgrading is an incredibly painful, slow and humbling process. Ambition comes with a heavy price tag.

Nouveau riche strivers tend to get their brains beaten in by the old-money bullies. They lose games and lose money, oftentimes stretching former I-AA budgets to the breaking point in the upgrade effort. Stadiums must be expanded to meet I-A specs, and other facilities must be built or refurbished to recruit against the established powers.

When the red ink flows, they take on "guarantee" games against power programs, accepting six-figure checks in exchange for fearful whippings on the road. That's the college football version of the poverty cycle, making the road from I-AA to BCS glory and riches a boulevard of broken dreams.

Yet more and more schools want a piece of it, with I-A membership growing from 111 a decade ago to 119 today, and 120 tomorrow. Western Kentucky will be the newest member, giving up habitual I-AA success to join the downtrodden Sun Belt Conference in football.

But the bottom of the barrel is not strictly lined with newbies whose reach has exceeded their grasp. There are a few other categories of schools represented. 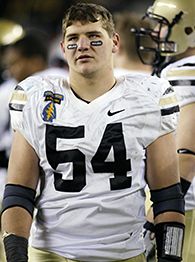 There are square pegs in a round-hole sport, such as Army (111), Baylor (101) and Duke (115). Baylor and Duke are academically oriented private schools in meat-grinder conferences full of enormous state universities. Army is a completely different animal -- although, for some reason, fellow military schools Air Force and Navy have had some immense success the past decade.

There are schools languishing because of apathy and/or bad management, like UNLV (104) and Temple (118). Neither has a particularly good excuse for habitual lousiness, beyond a general lack of urgency from the fan base to do a whole lot better. (Duke could fit into this category as well, because basketball completely dwarfs football.)

There are the chronic poor, schools that have been around awhile with precious little to show for it. Most of them toil in the shadow of larger programs and continually dwell in the bottom half of their conferences. Some of them have been conference gypsies, migrating from one non-power league to another in search of a home. The roll call: Eastern Michigan (116), Ball State (108) and Kent State (109) from the Mid-American Conference; San Jose State (102), New Mexico State (110) and Utah State (114) from the WAC; and Louisiana-Lafayette (112) from the Sun Belt.

And then there is the rogue element: SMU (103), still crawling out of the smoking crater left by the NCAA's first (and undoubtedly last) football death penalty. Twenty years later, the Mustangs remain a shadow of their shadowy former selves.

All told, they make up a bottom 20 teams that almost never play on television and almost never shock the world. Fans give away their tickets to friends and co-workers when these teams come to town -- except when they're scheduled for homecoming. Recruits ignore their text messages. Reporters never call.

The strivers are all dreaming of becoming The Next Boise. But the strivers also know the reality of big-time football is a good deal less glorious.