He has declared a moratorium on praise for his LSU Tigers. He says he will not let the kingmakers in the media "bestow anything" on his team.

"We're so far away from being the second-ranked team, it isn't even funny," Miles said Saturday night.

He's absolutely right about that. LSU should not be the second-ranked team when the new polls come out this week.

LSU should be the first-ranked team. By a mile.

That's the only conclusion to be drawn after watching the Tigers administer No. 9 Virginia Tech's worst loss in 25 years -- a 48-7 beatdown that was the worst mismatch between top-10 teams since, um, the BCS Championship Game.

If the voters in the AP and USA Today polls do their jobs correctly this week, they'll vote LSU No. 1. That would require 60 AP voters and 56 USA Today voters to change their ballots, demoting either USC or West Virginia, which won't happen. Voters have a weird habit of guesstimating in August on a national pecking order, then letting that harden into an inflexible iron rule.

But seriously: If you're voting on which team has done the most in the first two weeks of the season, you must put LSU ahead of USC, West Virginia and perhaps the Oakland Raiders.

The Trojans beat Idaho in their opener, then rested from that effort this week. The Mountaineers have given up a total of 47 points to Western Michigan and Marshall -- or 40 more than the Tigers have allowed to a pair of opponents from BCS conferences. 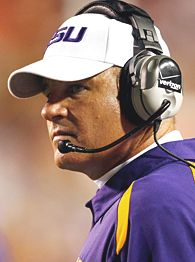 All the Tigers have done is smoke teams from the SEC and ACC like boudin sausage. They've won two games by the combined score of 93-7, treating the Hokies with the same disdain they showed Mississippi State.

In yet another blow to the crumbling prestige of the ACC, its preseason favorite was blown out of Tiger Stadium within minutes Saturday. The score was 17-0 before Tech had so much as a first down -- and erasing a 17-point deficit against this LSU defense is like trying to run a marathon in snowshoes.

"Those first three drives, we knew we had them," linebacker Ali Highsmith said.

Combine this face-plant with Miami's 38-point whipping at Oklahoma and North Carolina's loss to East Carolina, and you have one rotten ACC weekend. And if you factor in the losses last week by Virginia to Wyoming and North Carolina State to Central Florida, you have one rotten season to date. If it weren't for Georgia Tech's propping up league honor, the conference might as well fast-forward straight to Midnight Madness.

The only school that feels worse than Virginia Tech today is Michigan. And in case Michigan fans don't have enough reasons to covet former Schembechler-era Wolverine Miles as their next football coach, consider one more:

While the Wolverines have been hemorrhaging points in a catastrophically bad start to the season, Miles' LSU team opened the year by pitching 100 straight minutes of shutout football.

The Tigers finally relented and let an opponent cross the goal line late Saturday night -- barely. It took a replay review to confirm that thoroughly outclassed Virginia Tech actually had budged a few inches into the end zone for a touchdown in the third quarter.

"No," he said emphatically, shaking his dreadlocks. "But, hey, it doesn't matter."

Was he angry about giving up a touchdown?

"Yeah," he said. "We really don't want anybody to score."

That's an impossible goal -- but impossible is close to nothing for these guys. Consider the body bag stats racked up by the Tigers' D thus far: 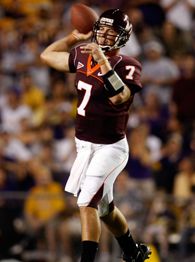 • They're surrendering 3.5 yards per pass attempt. That's beyond minuscule. Opponents are completing just 37 percent of their throws.

• They're a plus-8 in turnovers, with safety Craig Steltz owning half those takeaways. He had his fourth interception of the season against Tech.

• They've allowed just 20 first downs. Nobody can put together sustained drives against these guys.

• They've gotten two senior quarterbacks benched. First, it was Michael Henig of Mississippi State, who was harassed to the pine after throwing six picks against LSU in the opener. Saturday night, it was Sean Glennon of Virginia Tech, who was chased late in the first half after completing just two of 10 throws and throwing an interception of his own.

In both cases, they forced the other guys to bring in true freshmen in relief. Mississippi State turned to Wesley Carroll. Virginia Tech turned to Taylor in relief of Glennon, and it didn't take long to show why he was a hotshot recruit. It was Taylor who led the Hokies' lone scoring drive -- and would appear to be the logical starter for the foreseeable future.

"Defensively, week after week, you see it," Miles said. "Speed to the ball, preparation, attention to detail. You see our helmets all around the football."

But it would be a mistake to ascribe this blowout to only one facet of LSU's operation. Because an offense that at times was sporadic against Mississippi State more often was dynamic against Tech.

LSU churned out 598 total yards on a unit that led the nation in total defense the previous two seasons. The Tigers were gloriously balanced, throwing it 20 times and running it 20 in the first half and getting production from a variety of sources. 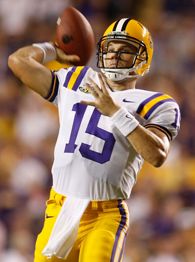 Matt Flynn was efficient, throwing for 217 yards and running for a touchdown. Backup Ryan Perrilloux showed why he was the nation's top quarterback recruit three years ago, completing all five of his passes for 84 yards and two touchdowns.

But the most dazzling aspect of the offense was the Tailback By Committee. Keiland Williams, Jacob Hester, Trindon Holliday and Charles Scott combined to run for 269 yards on just 27 carries, with none getting the ball more than a dozen times.

"We'll use those guys," Miles said. "You'll see a mix. That mix gives us a freshness and a strength in the running game we need.  I like having fresh backs."

The question is whether the backs can handle all that freshness. Surely they'd each like to run to exhaustion every now and then.

"If we were selfish, we wouldn't be as good as we are," Hester said.

John David would be John David Booty, who happens to be USC's star quarterback and also a close friend of Hester's. They grew up together in Shreveport, La., and still talk once a week -- despite their position this season as 1-2 rivals. 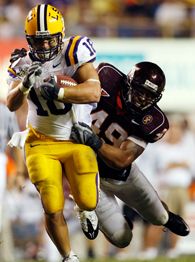 Booty was going to be a groomsman in Hester's July wedding, but he had to take a final that same day that would allow him to graduate. Hester still included Booty's name on the wedding program as an honorary groomsman.

Now the earliest, they could get together probably would be Jan. 7 in New Orleans. For a little thing called the BCS championship.

"To play against him in the championship in New Orleans would be a dream come true," Hester said.

If they played that game today, it should be LSU ranked No. 1 and USC No. 2.