TUSCALOOSA, Ala. -- When it was over, 89 plastic stadium cups lay upon the grass in the southeast corner of Bryant-Denny Stadium. A few dozen crimson-and-white pompoms, too. And two airplane bottles of booze -- one Jim Beam, one Seagram's.

That's the debris hurled down from the Alabama student section upon the celebrating pile of Georgia Bulldogs late Saturday night after the visitors had the unmitigated gall to beat the Crimson Tide 26-23 in overtime.

It was an atrocious display of fan petulance, but not an unprecedented one. I've seen firsthand a smaller-scale bombardment between the hedges from Georgia fans after a bitter loss to Auburn in 2005. In the SEC, you'd better keep your helmet on after a big win on the road -- and if your uniform ends up smelling like liquor, hey, it should wash out.

Here's what else came out in the wash on a wild night in T-Town: Richtenstein successfully invaded Sabanation. And the canonization of St. Nick was slowed just a bit.

T-shirts reading "Sabanation" are hot sellers in Alabama these days, part of the Nick Saban hysteria that has consumed the state since the day he double-talked his way out of the NFL to resurrect the Crimson Tide. One Alabama couple named their newborn Saban before the guy had even coached a game. An insane 92,000 fans showed up to watch the spring game. Bama gave him a $32 million contract, richest in college coaching history, and hardly anyone blinked. 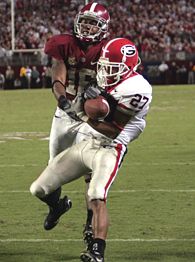 Then the Tide opened the year 3-0, upsetting Arkansas last week in the final seconds. And the hero worship somehow intensified.

The pregame talk radio Saturday was so full of Saban talk that it seemed he must have been starting on both sides of the ball, in addition to a full load of special-teams duties. One station excitedly reminded listeners that it would carry Saban's Monday news conference live -- fitting for the leader of his own nation.

A win in this game and it really would have gotten crazy. The starry-eyed citizens of Sabanation might have commenced sacrificing virgins on the doorstep of the football offices.

But in a startling single-play flash, Georgia demystified the man who coaches the Tide. Just as quickly as quarterback Matthew Stafford could loft a perfect 25-yard fly pattern to quicksilver receiver Mikey Henderson, reality returned. It turns out Alabama still has work to do before returning to powerhouse status, and it turns out Mark Richt is still the king of the road in the SEC.

The Georgia coach is an astonishing 23-3 in league road games. That includes a 9-2 record against ranked teams and a 2-0 record right here in Bryant-Denny. And it helps mitigate the damage done by a home loss to South Carolina two weeks ago.

"I think we grew up a lot tonight," Richt said of his young team. "I knew we would have to grow up relatively quick and there would be some growing pains, but I think we might have gotten ourselves back in the SEC race."

The Dogs did it the hard way. 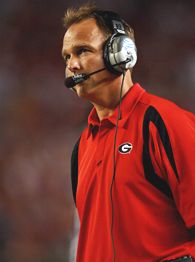 Even before the opening kickoff, Georgia was not properly reverential in one of the shrines of college football. Part of Alabama's elaborate pregame celebration of itself is a video presentation of great moments in the school's gilded gridiron history, set to soaring music. It's capped by a growling pronouncement from the patron saint of the program, Bear His Own Self.

But in a burst of sacrilege, the Georgia band cranked up the school fight song just as Bear began his grumble, drowning him out. Intentional or not, it was a precursor of insouciance to come from the visitors in the silver britches.

With the stadium rocking, Georgia took the opening kickoff and served a 10-play, 70-yard cup of shut-up to the Tide faithful. The Dogs covered 64 of those 70 yards in the air for a 7-0 lead, then expanded that to 10-0 with 6:21 left in the first half.

At that point, Alabama appeared close to a standing eight count. But if it has proved one thing the past two weeks, the Nick Saban edition of the Tide has shown it will not ebb without protest.

A field goal with two seconds left in the first half made it 10-3, and Bama tied it up early in the third quarter. The Tide promptly fell behind by 10 again, but their fitful offense delivered at crunch time. Its final two drives of regulation went 61 yards for a field goal, then 88 for a touchdown to tie it at 20.

And when Georgia's 48-yard field goal on the final play of regulation edged wide left, it seemed clear: The infidels would be repelled, and Sabanation would again triumph in the end.

But the Dogs wouldn't submit.

"Alabama's done a great job of getting their kids believing," Georgia offensive coordinator Mike Bobo said. "But we believed, too."

The Tide had to settle for a field goal in the opening possession of overtime. When the Bulldogs offense came out for its turn, Bobo went for the kill right away.

His call: 142 Z takeoff. Stafford was to fake a handoff to the right, drawing the safety that direction. Then he'd look for his receiver deep on the left side against one-on-one coverage.

"If they stuffed the run on first down, at their end of the field, their fans are gonna go berserk," Bobo explained. "You've usually got to hit one deep in a game like this."

Georgia's sideline coaches asked Bobo which receiver he wanted to run the route. His response: "I don't care." Receivers coach John Eason made an unusual call, going with Henderson -- a senior who never had caught a touchdown pass, and who had dropped a deep ball earlier in the night. 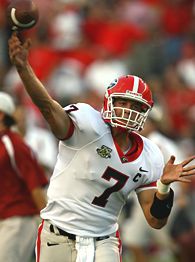 The play unfolded to perfection. Stafford faked. Henderson sprinted off the line and got behind the coverage. Stafford -- a prep superstar with a cannon for an arm who occasionally is plagued by sophomore inconsistency -- threw his best pass of the night. Henderson went up after it.

"It was my battle to win," Henderson said.

People were always telling 5-foot-10, 150-pound Henderson he wasn't big enough to play SEC football. Henderson proved them wrong by becoming a dangerous kick returner -- but making plays like this was a whole different deal.

"I couldn't tell if he caught it or not," Stafford said.

But when the stands went quiet and the referee's arms went up, Stafford sprinted to join the end zone dog pile. At the bottom of it, little Mikey Henderson said, he "felt the air go out of me." On top, Stafford felt debris bounce off his back.

Up in the press box, a woozy Bobo wobbled onto the elevator to go down to the field and quickly thumbed the digits on his phone. He called his wife, Lainie, who was home in Athens with four kids -- and a fifth due any day.

"She says she 'bout went into labor," Bobo reported. "But she's OK."

Meanwhile, the birth of a deity has been put on hold for a while longer here in Sabanation.