LEXINGTON, Ky. -- Seventy-five minutes after the latest haymaker to hit this punch-drunk college football season, LSU coach Les Miles was striding purposefully across the grass in an empty Commonwealth Stadium. 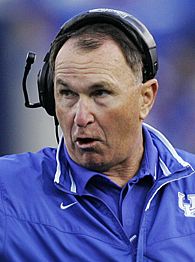 His No. 1 Tigers had just been stunned by Kentucky 43-37 in triple overtime, but before leaving the stadium, he had to shake Rich Brooks' hand. The coaches had never intersected after the game, thanks to the onrushing blue horde of fans spilling from the stands and swarming the field. Miles felt he owed that much to the guy he nearly got fired a year ago, walloping his Wildcats 49-0 on Oct. 14 and intensifying the screams for Brooks' scalp.

At that point, Kentucky was 3-4 on the season and Brooks was 12-29 at the school. Three hundred sixty-four days later, how much can change? Only everything.

Since then, Kentucky has gone 11-2, and Brooks got a standing ovation at the basketball team's Midnight Madness practice. And that was before his team earned what might have been the school's biggest win since the Bear Bryant days more than half a century ago.

"Forgive me, will ya?" Miles said to Brooks, grabbing his hand.

"Hey, I don't blame you," the old coach replied.

It was a classy gesture from a beaten coach who undoubtedly will face the slings and arrows of an outraged fan base fixated on winning a national title. Some of it will be deserved, after the Tigers coughed up a 13-point second-half lead and mysteriously failed to give their most productive back on this night (Charles Scott) the ball for astonishing lengths of time.

But grace at a time when Miles' guts surely were in turmoil is an impressive thing. And as difficult as this loss was to endure, here's the good news for LSU: One loss disqualifies nobody from national title contention in this season of anarchy.

"I don't know what's on and off the board," Miles said after his talk with Brooks. "First things first, we [need to] put ourselves in position to win the [SEC] West. That's what's key.  We've got to improve. If we do that, we're going to be right in the hunt." 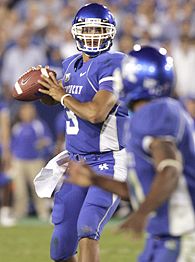 The hunt is open to more than a dozen teams. Instead of whittling down the list of contenders, we're expanding it.

We're at the point of talking about South Florida and Boston College as national title contenders -- with a straight face. We're at a point when Ohio State can lose the national title game by a million points and lose its Heisman Trophy-winning quarterback among eight NFL draft picks -- and probably now be ranked No. 1, thanks to the LSU loss and California's home loss to Oregon State.

We're at a point when lordly USC is defrocked by Stanford, which finished 82nd when an ESPN.com panel ranked all 119 Division I-A teams over the past decade. Then, the next week, powerful LSU is taken down by Kentucky, which ranked 73rd in the same poll.

Today, UK's ranking in the AP and coaches' polls should be rocketing back toward the top 10 after a remarkable show of poise and fortitude. Ten days earlier, a lot of people figured the Wildcats were exposed as impostors when they lost at South Carolina. Saturday night, they had their credentials re-established.

"For those people who didn't think we were a real contender," Brooks said, "maybe they do tonight."

Maybe they do, after an offensive line that began the season as a serious question mark held LSU's ferocious defense without a sack.

Maybe they do, after a third-string tailback named Derrick Locke, who played because of injuries to Rafael Little and Tony Dixon and who arrived at UK on a track scholarship, carried 20 tough times for 64 yards and a key touchdown by millimeters. The TD stood up after replay review perhaps only because there wasn't a good enough camera angle to overturn it. 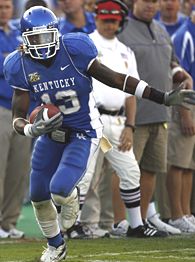 Maybe they do, after a maligned kicker named Lones Seiber -- a guy the coaching staff kept expecting to be beaten out, a guy who has missed three PATs this season -- stepped up and drilled three vital field goals in the fourth quarter and overtime. The last was from 43 yards in the second overtime, when a miss would have meant defeat.

"He's gone from the doghouse in everyone's mind to the penthouse," Brooks said.

Maybe they do, after a rushing defense ranked 91st nationally bowed up and stopped four straight LSU runs in the third overtime to win the game. In a burst of questionable strategy, the Tigers abandoned the pass and sent Jacob Hester into the line three times for a total of 8 yards, creating a fourth-and-2 at the Kentucky 17. Then LSU rediscovered Scott, who had gouged the Cats for 91 yards on just five carries in the first half but gotten just one carry in the second half and two overtimes combined. Put back in the game and handed the ball, Scott was stuck by linebacker Braxton Kelley, who had just been sent into the game by Brooks after the coach saw Micah Johnson was banged-up.

And it is Woodson's time, as well. All the Heisman Trophy votes Woodson threw away in a turnover-plagued performance at South Carolina last week might have been regained in this monumental upset.

Woodson's numbers will not leap out of the box score: 21-of-38 for 250 yards, three touchdowns and two interceptions. The key was the caliber of the defense Woodson was facing, plus the remarkable number of audibles he called at the line of scrimmage.

Woodson estimates he checked off on half of the Cats' 79 offensive plays.

"The job Andre Woodson did managing the offense at the line of scrimmage, that was huge," Brooks said. "His intelligence in what we package to check is just outstanding. If that isn't All-American-like, I don't know what is. Because he was the man out there tonight."

There was no disagreement from Miles. 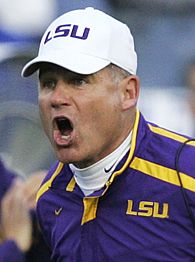 Woodson's final throw was to the same guy he connected with when the Wildcats upset Louisville a month ago: Steve Johnson. Same result: game-winning touchdown.

Woodson checked to the winning play Saturday, calling it at the line: "Sluggo," shorthand for a slant-and-go. After Woodson pump-faked the slant, Johnson cut back to the outside of the end zone and literally left LSU corner Jonathan Zenon on his behind. Johnson had to stretch for the ball, but he had it in his grasp when he hit the grass.

It was the culmination of a comeback that was built on Kentucky's toughness but also on the physical beating LSU had endured over two ferocious weekends. Last week, Florida and LSU mauled each other for 60 minutes before the Tigers prevailed, and that effort might have contributed to LSU's wearing down as this game went on. Tigers were falling left and right in the second half.

Still, Miles refused to attribute this loss to cumulative effect.

"I think our guys played their butts off," Miles said. "If I thought our guys showed a hangover, I'd have told you."

Hungover or feeling fine, anyone can lose at any time this college football season. Saturday, it was LSU's time, against a team it beat by seven touchdowns 364 days ago.

The meek might not inherit the football earth, but they're making life miserable for the mighty.