There was really nothing like it. Ever.In 88 World Series, nothing had come close to this, the mother of all World Series -- the Atlanta Braves vs. the Minnesota Twins, the 1991 World Series. Ultimate drama and suspense, joy and despair, all climaxed by a Game 7 showdown.

THE MOMENT
October 27, 1991, Sunday, Minneapolis Metrodome, grizzled veteran Jack Morris vs. young gun John Smoltz, Game 7 of the World Series -- made possible only by the Game 6 brilliance of one Kirby Puckett, who singled, tripled, climbed up the Metrodome's plexiglas panel to rob Ron Gant of a run-scoring extra-base hit, drove in a run with a sacrifice fly, stole a base, and then sent 55,155 into a frenzy by hammering a game-winning leadoff home run in the bottom of the 11th that tied up the Series 3-all.

Here now, in Game 7, Morris and Smoltz are locked up in a mesmerizing, seat-squirming scoreless duel. Both clubs had chances to break the stalemate in the eighth inning. Both loaded the bases with less than two outs. But both failed to score as both threats were snuffed out with double plays. 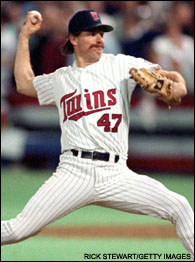 As we go to the bottom of the 10th inning, the Twins' fans rise as one as the dependable, clutch-hitting, rally-igniting Dan Gladden walks to the plate. He has two of the six hits off the brilliant and masterful Smoltz, and now he faces Braves closer Alejandro Pena. Gladden starts off the inning by lofting a broken-bat flyball to left-center. The ball drops in for a hit, then takes a huge bounce off the carpet, enabling Gladden, his long blond hair flapping on his shoulders, to hustle into second base for a standup double.

"I knew the ball was going to land in between the outfielders," Gladden would say later of his clutch hit, "and I knew it was going to bounce high off the turf. So when I hit it, I got out of the box pretty good. I was just being aggressive. That's the only way I know how to play."

Twins second baseman Chuck Knoblauch, the electrifying rookie, sacrifices Gladden to third. Braves manager Bobby Cox orders Pena to walk Puckett and Kent Hrbek intentionally, loading the bases for pinch-hitter Gene Larkin. As a college player, Larkin had broken all of Lou Gehrig's records at Columbia University, but he had yet to distinguish himself as an everyday player in the majors.

Larkin, a switch-hitter batting left-handed against Pena, is hitting for only the fourth time in the Series and for only the seventh time in the Twins' breathtaking postseason run. All three Atlanta outfielders move in, playing close enough to catch a bloop and have the opportunity to throw out Gladden at the plate on a short flyball to prevent him from scoring and ending this incredible championship series.

Pena glares in at the sign, goes to the belt, winds and delivers a fastball ... Larkin takes a rip at the first pitch and lofts a fly to left-center ... As soon as Braves left fielder Brian Hunter turns and runs backward, everyone knows it's over. The ball sails over Hunter's head and as Gladden trots home, thrusting his arms into the air, he jumps on home plate with both feet, and the wild celebration at the Metrodome begins.

The Dome quakes as Morris and the other Twins leap out of the dugout and jubilantly dance toward home plate to smother Gladden and then Larkin, a member of a select group of athletes to deliver the final championship blow, a memory of a lifetime.

Later, Larkin would say of his at-bat, "I knew a fastball was coming. I just wanted to make contact and hit a fly ball. As soon as I hit it, I knew the game was over and that we could relax and enjoy the world championship."

The entire Series was unforgettable, from game-winning home runs by the Twins' Greg Gagne in Game 1 and by Scott Leius in Game 2, to the Braves' David Justice racing home on Mark Lemke's 12th-inning hit to win Game 3 and then Lemke sliding his hand across the plate to win Game 4 to Puckett's catch and home run in Game 6.

"You get the feeling sometimes that if the Yankees or Red Sox aren't in the World Series it can't be a classic," Justice would say years later. "But that Series in '91 was a true classic. People talk about it all the time. I mean, come on -- four games decided on the final pitch, three go extra innings, five were won in either our last at-bat or theirs, a 1-0 Game 7. I mean, come on, That's amazing."