Ripken was celebrated everywhere he went that year, from Boston to Chicago to Oakland, for Gehrig's record held a special symbolic place in America. Until Ripken, no one had come within five years of Gehrig's mark. To illustrate the enormity of the feat, during Ripken's 2,130 game streak, 27 major-league clubs started 522 different shortstops. From the time Ripken started his streak 3,712 major leaguers were disabled; during the 1995 season alone, 340 major leaguers went on the disabled list from the start of the season until the day Ripken was braced to overtake Gehrig.

The closest Ripken came to missing a game was a 1985 ankle sprain that resulted in swelling and discoloration. The next day was an off day. The next day, with the ankle taped, he played. The next time he almost missed a game was eight years later, in 1993, when he sustained a twisted knee in a brawl with the Mariners. The next morning, Ripken had trouble walking. He told his wife that the streak was over, that he couldn't play. But again, aggressive treatment that including running in the tunnels below Camden Yards, combined with Ripken's refusal to give in, enabled him to fight through the pain and play that night.

THE MOMENT
September 6, 1995. Orioles Park at Camden Yards. The city of Baltimore is pulsating. Bursting at the seams. This is the day Ripken will break one of sport's most sacred records. Every night in Baltimore, when an Orioles' game becomes official, a huge banner on the brick B&O Warehouse behind the right-field bleachers at Camden Yards is removed to update the countdown to the record-breaking moment. On this night, it will turn from the magical 2,130 to the supernatural 2,131.

In the streets of Baltimore and its suburbs, people beg and bribe for tickets. Tickets are selling for thousands of dollars. Signs appear along the highways to the stadium: "Just One Ticket PLEASE."

The ballpark has a playoff atmosphere, complete with bunting along the first- and third-base sides of the field. Two rows of temporary seating have been erected next to the Orioles dugout and reserved for $5,000 each, $1 million of which will be given as a donation to study Lou Gehrig's Disease.

More than 600 reporters are present to document the historic evening, which includes special-edition memorabilia at concession stands and special commemorative souvenir baseballs. President Bill Clinton, Vice President Al Gore and their families visit Ripken in the clubhouse before the game. "This is the closest thing to an out-of-body experience I'll ever have," he tells Clinton. 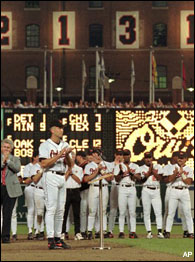 As game time approaches, Ripken, his blue eyes sparkling under the brim of his black and orange Orioles cap and his gray hair trimmed neatly above his ears, stands at the side of the O's dugout, greeting fans and shaking hands.

As saxophonist Branford Marsalis performs the national anthem with pianist Bruce Hornsby, flashbulbs pop all around Camden Yards, one after another. Every significant moment is documented with flashes from cameras -- when Ripken's children throw out the ceremonial first ball, when Ripken races to shortstop in the first inning, when Ripken steps out of the dugout for his first at-bat ...

When Ripken walks to the plate for his second at-bat in the fourth inning, the stadium is overflowing with emotion. Ripken had homered in the previous two games of the series, and amazingly, he does again, cracking a signature line drive in the left-field corner, prompting the stadium to explode in celebration.

As the Angels are retired in the top of the fifth, the historic moment finally arrives. The game is official. Everyone in the stadium stands, anticipating the unfurling of the banner, signifying the historic moment. Players from both teams stand in front of their dugouts. As the banner on the B&O Warehouse is updated from 2,130 to 2,131, fireworks explode and balloons and streamers soar into the air.
The crowd showers Ripken in a salute that interrupts the game for 22 minutes. Players from both teams hoist video recorders and cameras to document the scene. Ripken emerges from the dugout to wave to the crowd and tap his heart. He emerges again ... and again ... and again. Eight times he emerges for curtain calls.

Games across America are stopped so fans and players can watch the unprecedented scene on scoreboards. As the crowd continues its standing ovation, Ripken walks over to his family next to the O's dugout and takes off his uniform shirt. He gives it to his wife, Kelly, as a keepsake. The T-shirt Ripken wears features the message: "2130-plus. Hugs and Kisses for Daddy." He hoists his 2-year-old son, Ryan, into his arms, and kisses his 5-year-old daughter, Rachel. He waves to his parents in an upstairs box and then shakes the hand of his brother Billy, a former Oriole.

Ripken returns to the dugout, but Rafael Palmeiro and Bobby Bonilla and several other Orioles coerce Ripken to run along the stadium's outer area, a victory lap, so to speak. Knowing the reluctant and humble Ripken would never do it on his own, Palmiero and Bonilla push Ripken out of the dugout to start a triumphant circular tour of the field.

Ripken begins running along the perimeter of the magical palace, slapping the hands of fans. He shakes the ballgirl's hand and then a security man's as he passes under B&O Warehouse banner.

He leaps up to slap the hands of people in the bleachers. He stops at the bullpen entrance to hug Elrod Hendricks and thank the coach he's known since he was a child. As a fan drops his cap on the warning track while reaching out to touch the new consecutive-games record holder, Ripken goes back to pick it up and return it.

All the umpires throw their arms around Ripken and embrace him. As Ripken heads toward the visiting dugout, all the Angels are lined up, one by one, to congratulate him. Ripken hugs Rod Carew and Chili Davis and shakes the hand of every Angels player.

The parade around Camden Yards takes 12 minutes. Following the final out of Baltimore's 4-2 victory, another celebration begins at home plate. "Tonight, I stand here overwhelmed as my name is linked with the great and courageous Lou Gehrig," Ripken tells the crowd. "I'm truly humbled to have our names spoken in the same breath."

He says he owes thanks to four people: his parents Cal Sr. and Vi Ripken for their inspiration and motivation; his wife Kelly for her support, and former teammate Eddie Murray "for teaching me how to play the game day in and day out."

After teammate Brady Anderson and former Orioles shortstop Mark Belanger address the crowd, a hush falls over the stadium as Joe DiMaggio, a teammate of Gehrig's, steps to the microphone. The clock at Camden Yards shows midnight. The park is still full to the top rows with fans, glassy-eyed, exhausted, honored to witness the night's events. "Wherever my former teammate, Lou Gehrig, is today, he's tipping his cap to you, Cal," DiMaggio says, "He's looking down on you, Cal, with appreciation."