The 1983 Houston Cougars were perhaps the most electrifying team in college basketball history, taking exhilaration to a new level. Clyde Drexler, Akeem Olajuwon and Co. ran the floor like race cars and dunked with such frightening authority and spectacular awe that they were known as Phi Slamma Jamma..

They crushed opponents by an average of 18 points per game with a barrage of thunderous dunks that made heads spin. They were 31-2, the undisputed No. 1 team in the land. They trounced Louisville, the No. 2 team, in the NCAA semifinals with a second-half onslaught of dunks. The Cougars finished with 14 dunks, including a staggering eight in a row in a second-half run that turned the game into a laugher.

In the NCAA title game, the Cougars meet North Carolina State, a team that barely made it into the tournament. The Wolfpack lost 10 games. No team had ever won an NCAA championship with as many losses. The Wolfpack were lucky to be there, beating Pepperdine, UNLV and Virginia after those opponents missed free throws down the stretch.

So there it was -- invincible Houston vs. the mother of all Cinderella teams, North Carolina State.

THE MOMENT
April 3, 1983, Albuquerque, New Mexico. Not surprisingly, the game opens with a dunk. The only difference is that the dunk comes from N.C. State's Thurl Bailey. It's the first shock on a night of stunners.

As the game unfolds, it's the Wolfpack that look more like the Cougars, running the floor, grabbing control of the game. With the ball in the hands of Sidney Lowe and Dereck Whittenburg -- teammates since their high school days in Washington, D.C. -- N.C. State runs when it sees the opening and patiently works its halfcourt offense. The Wolfpack leads 33-25 at halftime.

Lewis sensed trouble in the pre-title game practice. His Cougars acted so overconfident that they practiced terribly, their most lethargic of the season. So he ordered the players to go back to the hotel. Then he imposed his only curfew of the season. 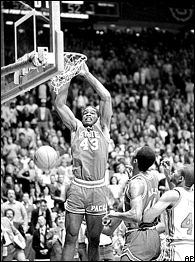 Midway through the second half, Houston begins acting like the real Cougars, the scary Cougars. They go on a 17-2 run that includes their first dunk of the night to take a 42-35 edge. But then Lewis does the inexplicable and slows down the game. Just when the Pha Slamma Jamma Show is about to bust out, Lewis pulls in the reins. Moments later, Whittenburg and Lowe get red shot, drilling 20-foot bombs, seven in all, and as the game winds down to the final minutes, N.C. State starts fouling the Cougars, who do what they did all season -- miss free throws.

Back on the court, Lowe and Whittenburg work the ball around -- N.C. State makes 17 passes in all during the possession -- but the play breaks down when Whittenburg swings the ball to Bailey in the corner.

There is four seconds left when Bailey passes it back out toward the top of the key to Whittenburg. Suddenly, Houston's Benny Anders quickly steps in and tips the ball, nearly intercepting it and racing in alone for an uncontested, title-winning dunk. Houston's players, meanwhile, all take a step upcourt, thinking fastbreak.

But Whittenburg beats Anders to the ball, retrieves it and with the clock showing 0:02 he heaves a 35-foot desperation shot. Keen eyes see that the ball is short and that the game is heading into overtime. Keener eyes see something else developing ...

When Whittenburg throws up his prayer, teammate Lorenzo Charles slips down the lane uncovered and uncontested. Seconds earlier, when Anders tips Bailey's pass and Houston's players go into their offensive mode, none of the Cougars, specifically Olajuwon, are in position to box out Charles.

"I thought Benny stole the ball," Olajuwon would say years later. "I was about to take off upcourt and then I skidded to a stop. By that time, it was too late to recover and box out."

Charles, reading the shot all the way, leaps, snatches the ball from the air and slams the ball into the net with a second left. A beat later, bedlam erupts on one side of the court, disbelief on the other.

Bailey falls to the floor sobbing, Lowe races into the stands to hug his mother, and Valvano runs every which way on the court, not knowing what to do, desperately searching for someone to hug and kiss.

"I actually didn't see the ball until it was in the air," Charles would later say after the game. "I was trying to get in position for an offensive putback. I ended up under the basket, and I could see Dereck's shot wasn't going to make it. So instinctively, I just grabbed it and put it in. I didn't know how much time was left, whether there was two or three seconds left. But when I came down, I looked up and saw two seconds turned to one and boom -- we had done it. We won it all. Just thinking about it gives me chills."