Just look at what happened in Houston, where Barry Bonds and the San Francisco Giants were playing the Astros. The Giants led 8-1 in the third game of the season's next-to-the-last-series when Bonds, with 69 home runs, came to the plate. And that's when Astros manager Larry Dierker gave the signal that everyone dreaded. The four fingers. An intentional walk.

The move enraged fans and even the players. Bonds was one home run away from tying Mark McGwire's single-season record of 70, set three years before. But the Astros refused to challenge him. Bonds was walked intentionally eight times in his first 14 plate appearances. And when Dierker flashed those four fingers while trailing by seven runs, everyone had seen enough.

"A disgrace," Giants first baseman J.T. Snow would say. "Challenge him. Be men." But, in the ninth inning of that game, with San Francisco now leading 9-2, rookie left-hander Wilfredo Rodriguez finally challenged Bonds with a 93-mph fastball. Bonds pounded it. As the ball exploded off his bat and sailed deep into orbit, he tossed away his piece of black maple timber, raised both arms to the heavens and set off on his slow trot around the bases for the 70th time, tying McGwire's mark.

The Giants then flew to San Francisco, to wrap up the season against the Los Angeles Dodgers, and to see if Bonds could become baseball's all-time single-season home run king.

THE MOMENT
Pac Bell Park is electric on Friday night, October 5, 2001. Not only is Bonds going for the record, but the Giants are still alive for a division title. There is that great buzz around the ballpark, that distinctive buzz prevalent in October, when the game reaches a new level of meaning.

That buzz bursts, however, as the Dodgers score five runs in the top of the first inning. When Bonds walks to the plate in the bottom of the first to face Chan Ho Park, Pac Bell is eerily subdued. The score has everything to do with the tempered emotions. Up 5-0, Dodgers manager Jim Tracy isn't going to pull a Dierker and throw up four fingers. Park will challenge Bonds. Go right after him. 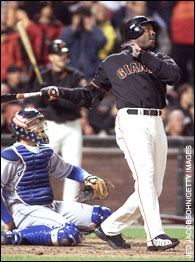 Park unleashes his first pitch, a ball, down and away. The next pitch is over the plate, a little in, and Bonds whips his black maple weapon with dizzying speed and connects. The crowd rises. This is a no-doubt-about it jack, a 445-foot bomb. The fans look toward the right-field bleachers in awe. Bonds throws his bat aside and sprints around the bases as the new all-time home run king.

It's a surreal, electric moment as Bonds rounds third for the 71st time, and is greeted at home plate by his 11-year-old son, Nikolai, and a crowd of teammates. He hoists his son into the air and points skyward.

Banners proclaiming Bonds' 71st home run are unfurled on the light posts above center field. Fireworks go off over the boats gathered in McCovey Cove. Beneath the roar from those in the stands, the sound of horns emanate from the cove beyond right field. It's a lovefest, a celebration of a uniquely talented player in an unprecedented zone.

After touching home plate, Bonds maneuvers his way through the crowd of bodies and moves toward the seats behind home plate to kiss his wife and mother. Bonds takes a curtain call, blowing kisses to the fans.

Bonds surpasses McGwire's record during a very difficult time in his life. He is mourning the death of a close friend, Franklin Bradley, who had passed away just a few days earlier from complications during abdominal surgery. Bonds is also under more pressure than any Giant, saddled with the responsibility of carrying the club to the playoffs. At the same time, he's trying to surpass baseball's home-run record while looking at one or two hittable pitches per game. On top of that, he is also dealing with a swarm of media, 350 strong.

As Bonds emerges from the dugout in the third inning for his second at-bat against Park, the crowd rises as one and loudly applauds the new home run king. By now, the Giants trail, 8-4. Park delivers a 1-1 pitch, Bonds swings and boom -- there it goes again, amazingly, outrageously. The crowds erupts as Bonds' laser launch disappears over the center-field wall. He jubilantly rounds the bases in a scene that mirrors the one that took place just two innings before.

The Giants lose a heartbreaker, 11-10, in the longest nine-inning affair in history, four hours and 27 minutes, and are eliminated from the title race. Bonds sits on the dugout steps, staring into space, his eyes moist, his shoulders slumped. He has the home run record. He also experiences another World Series-less season. He bows his head. And he cries.