New England Patriots quarterback Tom Brady, after completing his fifth pass on a last-minute drive in Super Bowl XXXVI, spikes the ball, setting the stage for the final play of regulation. The Patriots and St. Louis Rams are tied 17-17, as Adam Vinatieri races onto the Superdome field to attempt a 48-yard field. The clock reads 0:06.

THE MOMENT
New Orleans, February 3, 2002. The Patriots are cruising toward a lopsided upset of the 14-point favorite Rams, having built a 17-3 lead heading into the final quarter. With the Rams on the threshold of a touchdown at the Patriots' 9, St. Louis quarterback Kurt Warner scrambles to his right, but is met by a crushing hit from linebacker Roman Phifer.

The ball pops loose. Patriots safety Tebucky Jones picks it up at the 3, and as he bolts toward the other end zone 97 yards away, Patriots fans realize the Super Bowl title will be theirs.

But before Jones' celebration is complete, the little yellow flag at the other end of the field proves once again that nothing comes easy for New England sports fan. It's always something. Jones' TD is called back because of holding against linebacker Willie McGinest.

With the ball back in Warner's hands, he dashes into the end zone to make it 17-10. With 1:30 left in the game, the Patriots' defense is still protecting a slim lead, but Warner orchestrates a magnificent drive that ends with a 26-yard TD pass to Ricky Proehl with 1:30 left, and suddenly the game is tied at 17. A sure win was suddenly a tie game. 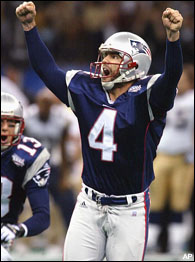 Coach Bill Belichick contemplates running the clock out and regrouping for overtime, but he turns to assistant Charlie Weis and says, "Let's do it." Weis then turns to Brady, the daring and unflappable quarterback, and gives him a nod. Brady races back onto the field, like a young, wild colt.

Starting from his own 17, with 1:21 showing on the clock, Brady goes to work, throwing completions of 5, 8 and 11 yards to scatback J.R. Redmond, who drags a Ram past the first-down marker on the third pass play then cleverly sneaks out of bounds at the New England 41.

After avoiding a blitz by throwing away a first-down pass, Brady finds Troy Brown in a seam underneath the zone for a huge 23-yard gain to the St. Louis 36, then completes a 6-yarder to tight end Jermaine Wiggins. He then spikes the ball and hands the baton to Vinatieri, who charges onto the field, determination and fiery resolve in is eyes, heart and leg, 48 yards away from giving the Patriots their first Super Bowl championship.

The first thought on everyone's mind is Scott Norwood, the guy who missed a 47-yard last-second field goal that would have given the Bills a victory over the Giants in Super Bowl XXV, the guy who gave new meaning to the phrase "wide right."

As the snap is made, cameras flash throughout the stadium. Vinatieri quickly moves toward the ball, swings his leg, and connects perfectly and cleanly. His arms immediately go up. He knows it's over, that he had won the Super Bowl. Bedlam erupts throughout different pockets of America, 42 years of Patriots frustration gone.