The legend was in the midst of playing the worst golf of his entire career. He was 46 years old in 1986. His body ached. His swing was way off. So was his chipping and putting.

The whispers were turning into screams. Everyone thought the legend's career was over, that he should retire with some semblance of dignity, that he'd never win another tournament.

They were saying Jack Nicklaus was too busy designing golf courses instead of playing them. Besides, he had already made his mark on the game, with a record 17 Major championships.

But he hadn't won a tournament in six years -- since August, 1980, when he captured the PGA Championship. He had missed the cut in three tournaments and was 160th on the money list.

As the 1986 Masters approached, a journalist wrote that Nicklaus was finished and shouldn't even show up for the tournament. The article was taped to the refrigerator of the house that Nicklaus rented for his family and friends for the week.

THE MOMENT
It's Sunday morning when Nicklaus receives a phone call from his second-oldest son, 23-year-old Steve, who says, ''So dad, what do you think you need to shoot today to win?" Nicklaus replies, "Probably 65." To which Steve quickly replies, "That's what I had in mind too. So go out shoot it!"

Nicklaus struggles on the greens early on, missing putts of 20, 18, 5, 22 and 10 feet. By the time he reaches the ninth green, his frustration is off the charts. He is now five shots behind the leaders with just 10 holes to play. "If I'm going to do anything, I better start doing it now," Nicklaus says to his caddie, son Jack Jr.

At No. 9, Nicklaus hits a wedge into the steep green, leaving him 11 feet shy of a birdie putt. He glances at Jack Jr., his caddie, looking for advice. "Looks like the left edge," Jack Jr. says. Jack Sr. looks at the shot, pauses, looks at his son, and says, "How about one inch out on the right." They both smile at one another. Nicklaus then plays the shot to the top of the cup. The ball drops right in the hole. "That got me started," Nicklaus would say later to the media. "I got loose ... because we were having fun." 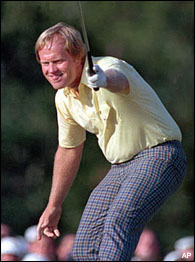 Nicklaus catches a break on No. 10, when his drive hits a spectator and bounces into the fairway. He birdies the hole and then sinks a second straight 25-footer for another birdie on No. 11 as the crowd goes wild. Nicklaus bogeys No. 12. "After that, I knew I had to be aggressive the rest of the way, and I was so pumped up that I was taking one club less that I normally would," he would later tell the press.

Turning Augusta National into his own personal theater, Nicklaus birdies No. 13 and then pars No. 14, starting a ruckus that results in grown men climbing trees, children riding on the shoulders of adults, and concession-stand operators abandoning their posts, all to see a bit of history.

On the 500-yard 15, Nicklaus nails his drive and hits a 4-iron second shot 200 yards over the water. The ball lands 12 feet from the hole, leaving Nicklaus to stare at an eagle putt. Coincidentally, this is the same exact putt Nicklaus misread in the 1975 Masters. "It's not what it looks like," he says, turning to Jack Jr. He then rolls the ball right into the heart of the cup, putting him 7-under and within a shot of the lead held by Ballesteros and Kite.

On the par-3 16th, Nicklaus' shot just misses holing out and stops three feet away. The crowd explodes once again, and as Nicklaus Sr. and Jr. walk up the fairway together, tears begin to form in Nicklaus' eyes. But he quickly shakes himself. "Hey, stop being so emotional," he says to himself. "You've still got some golf to play.'"

On the 16th green, Nicklaus gazes at a short putt for birdie. "You'll get this ... Just keep your head still," Jr. tells dad. Nicklaus sinks the putt for a birdie 2. The crowd roars again.

Nicklaus is tied as he stands on the tee of the 400-yard par-4, which has a difficult pin placement near a crown in the green. After an errant tee shot, facing a tough wedge shot of 125 yards under a tree limb and up to a raised green, Nicklaus executes like the Nicklaus of old. He somehow gets the ball out and up and it stops within 11 feet left of the pin -- and the lead.

"This putt is impossible to read," Nicklaus tells Jack Jr. He stares at a birdie putt that will put him atop the board. He surveys ... sets himself ... keeps his head on the ball ... taps the ball ... it wriggles left .. then goes right ... and then falls right into the heart of the cup.

The crowd bursts as they're given one of most memorable trips ever down memory lane. "This may be as fine a round of golf as I ever played, particularly those last 10 holes," Nicklaus would say to the media. "I'm not as good as I was 15 years ago. Just occasionally I want to be as good as I once was, and I was that today."

With a one-shot lead, Nicklaus two-putts from 40 feet for par on 18th. As the ball disappears into the cup, Nicklaus raises his arms, then walks over to give Jackie a big, emotional hug. They walk off the green embracing, the father burying his head in his oldest son's shoulder, savoring the moment and his 7-under-par 65, which includes a record back nine 30, and 9-under-par total of 279. Over the final 10 holes, Nicklaus posts six birdies and an eagle, shoots seven strokes under par, and finishes with a flourish -- eagle-birdie-birdie-par.

But victory is still in doubt. Nicklaus returns to the cabin to watch Kite and Norman. Kite misses a 10-foot birdie putt and finishes one shot back. Norman reaches 18, riding a string of four straight birdies and a chance to force a playoff with par. But when Norman's approach shot flies into the crowd, and he iwinds up with a bogey, Nicklaus is crowned king, becoming the oldest player to win the Masters, turning the sacred tournament into the most memorable one ever.