Lance Armstrong had only a 50 percent chance of living -- if he was lucky. He had testicular cancer that had spread to his lungs and abdomen. His abdomen had 12 tumors, some as big as golf balls. His brain had two lesions.

He underwent a pair of major surgeries, one in which his right testicle was removed, the other in which brain lesions were repaired. He then had to go through four grueling rounds of intense chemotherapy, each a month apart.

He was 25 years old and knew he may never ride a bicycle again, which is what he did better than nearly everyone else in the world. "I couldn't help but think that I wasn't going to make it," Armstrong would say.

At the age of 21, Armstrong became the youngest rider ever to win the world road race championship. Three years later, he emerged as one of the sport's brightest stars. That's when he began experiencing groin pains. He shrugged it off as the result of riding on a hard bicycle saddle five hours a day, every day.

Then, one day in the fall of 1996, shortly after turning 25, he became dizzy. Then his vision became blurred. He began coughing up blood. He had cancer.

During radiation therapy, Armstrong kept riding, 30 to 50 miles a day. He sat out virtually all of the 1997 season, working himself back into shape. When he decided to race again, his team, French Cofidis, shockingly and cruelly informed him that it did not want him back, that he was not worth the risk. The team even wound up paying Armstrong only 25 percent of his contract. Several other European teams rejected Armstrong's plea to join them, thinking he would be too ill to ride.

But it was the struggling United States Postal Service team, organized just a few years earlier, that was the only unit to show any interest in him. By the summer of 1997, Armstrong was declared cancer free, and he set out with renewed dedication, determination and resolve to conquer the world of bicycle racing.

In the middle of a race in France in early 1999, he discovered he was not mentally ready or prepared to race. He bowed out of the race and flew back home to Austin, Texas. He was so depressed that he didn't even unpack his bike for a month.

He thought about quitting the racing circuit, but in the spring of 1999, he rode through the North Carolina mountains for 10 days with friend and former racer Bob Roll, who convinced Armstrong to give it another try, that it's just not the body that needs to recover, but the mind and spirit as well.

The scenario of an athlete returning to world-class competition from such advanced cancer and aggressive treatment had never been done before, so when Armstrong journeyed to Paris for the 86th Tour de France, the world's most famous bicycle race, the world wasn't prepared for what would occur.

THE MOMENT
July 1999, Paris. The Tour de France, the grueling 2,290-mile race that crosses two mountain ranges and takes 22 days to complete through rain, hail and scorching sun, is wrapping up. 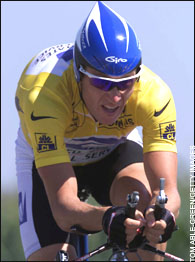 The race started in early July, and for three weeks Lance Armstrong forges on. Amazingly, he dominates the race. He begins wearing the yellow jersey, the race's symbol of overall leadership, on July 3 after winning the short prologue.

He relinquishes it two days later as sprinters dominate the stages on flat territory. But on July 11, Armstrong regains the yellow jersey as he crushes the field in a time trial. Then he closes in on first place on July 13 by triumphing with a daring attack on the first day in the Alps.

"I raced in a style that people like," Armstrong would tell the media later. "I'm aggressive. People want attacks. They want to see the boys working. I've always said that I'd rather be the guy that lights the race up and finishes second than the guy that sits back, doesn't do anything and wins."

Armstrong's stage win in the Alps over six climbs stuns the world, including rivals, observers and fans, not only because of his bout with cancer but also because he is not considered a strong climber. What makes his performance so much more startling is that he had finished just one of his previous four trips to the Tour de France, finishing 35th in 1995.

Armstrong wins another stage in which he has to climb over a mountain pass at 8,675 feet, then descend at breakneck speed. When Armstrong finishes with 10 laps of a four-mile loop on the Champs-Elysees on the final day, he clinches first place, winning the event by an astounding 7 minutes and 37 seconds, establishing a record average speed of 25 mph, breaking the mark of 24.8 set by Italy's Marco Pantani the previous year. He becomes the second U.S. rider to win the (following Greg LeMond's victories in 1986, 1989 and 1990) and the first to win with a U.S.-sponsored team -- on an American-made bicycle, no less.

Disbelief and joy engulf Champs-Elysees as Armstrong celebrates his win in the world's most torturous event, just 33 months removed from cancer surgery.

As he crosses the finish line in Paris, Armstrong yells, "I'm in shock!" A crowd of nearly 500,000 people, watching under a blazing sun, cheer him wildly. As the U.S. team rides its bikes up the Champs-Elysees from the finish line to the hotel, Armstrong carries a large American flag followed by teammates holding smaller flags.

"Winning this is a miracle," Armstrong would say. "Two years ago, I didn't know if I'd be alive, let alone be riding in the Tour de France."

"It truly is nothing short of miraculous," Dr. Lawrence Einhorn, the oncologist who helped oversee Armstrong's chemotherapy and radiation treatments at Indiana University Hospital, would tell the media. "It is remarkable for him just to compete in the Tour de France, let alone win it."

As Armstrong triumphantly rides through the wind, a French TV reporter on a motorcycle rides up, sticks out a microphone and asks the new Tour champ how he really feels. Armstrong says that the driving force was his determination to encourage other cancer patients, "to give hope and inspiration to millions and millions of people who never had any hope. This sends out a message to all survivors: We can return to what we were before -- and do even better."