He had never even been knocked down to the canvas. Mike Tyson was the most awesome and terrifying specimen to emerge in boxing in years, complete with frightening persona and brutal savagery inside the ring.

He was a beast in a human's body, a wild animal stalking the ring, a chilling vision of terror. He fought 37 times and won them all. Thirty-three by knockouts. Tyson was only 23 years old and creating an aura of invincibility and indestructibility never before seen.

His combination of power and confidence and dominance had experts calling him one of the greatest heavyweights of all time, perhaps the greatest ever.

THE MOMENT
As the world's most celebrated fighter emerges from the locker room in Tokyo's Korakuen Stadium, the lights dim and an eerie hush falls upon the packed arena, followed a moment later by a huge roar as Iron Mike Tyson heads to the ring, a menacing vision of terror and strength.

This is to be another evening of destruction against a pedestrian opponent whose only qualification, in truth, is that he is alive and kicking. So much of an unknown, the mild-mannered and obscure Douglas fails to draw the attention of a single photographer at his weigh-in. He was a nobody.

But, as the bout begins, it is clear that Tyson is not the unbeatable force the world had come to know. As Tyson stands in the ring like a statue, with no focus or concentration, Douglas throws jab after jab. For the first time, the public sees a version of Tyson never seen before. For the first time, an opponent's height and reach advantage -- Douglas is 6-4 -- is significant against the 5-11 Tyson. Douglas' hand speed is crucial, for every time Tyson leaps inside to deliver a punch, Douglas beats him to it with a long right. The most damaging punch, at the end of the second round, a quick uppercut to the chin, staggers the champ. 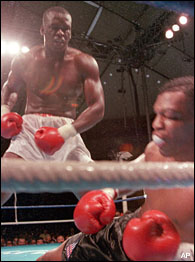 Tyson rebounds, temporarily, in the third round, landing a vicious left to Douglas' body, but the confidence in Douglas' corner is so high that trainer J.D. McCauley screams, "Ain't no iron in Mike! This is your night!"

By the fifth, Douglas senses victory as he wobbles Tyson with a vicious right, swelling the champ's eye. But later, in the eighth round, Tyson lands one of his sudden and vicious right uppercuts that drops Douglas to the canvas with six seconds left in the round. Yet the punch -- which ended many of Tyson's earlier bouts in the opening 90 seconds -- isn't as damaging to Douglas, who slams his fist on the canvas in frustration.

As referee Octavio Meyran Sanchez's count reaches eight and then nine, Douglas bounces up. The bell sounds, denying Tyson victory. To the ninth round we go. Douglas corners Tyson, pushes him against the ropes, and lands four consecutive quick punches that sting the champ. Tyson's head flops backwards and dangles, dangerously.

With his left eye closed and swollen from Douglas' last series of shots, Tyson emerges from his corner for the 10th round. Douglas unleashes another assault, sending Tyson to the mat, dazed, at 1:23 of the round. A lonely, pathetic, demoralized figure of doom, Tyson fumbles for his mouthpiece, finds it and shoves it back into his mouth, backwards and upside down.

He stumbles toward the ref, glassy-eyed and foggy. Sanchez, with no choice, signals that the fight over. Douglas and his cornermen leap to the heavens, victors in what many consider not only the biggest upset in boxing history, but the biggest in the history of sports, an upset so huge that it stands right next to the 1980 U.S. Olympic hockey team's victory over Russia and the New York Jets' Super Bowl III triumph over the Colts.

"It is the biggest upset in sports history," boxing historian Bert Sugar says. "Douglas had no business whatsoever beating Tyson. None whatsoever."

"I wasn't afraid, and to me that was the key," Douglas would later tell the press. By lacking fear, Douglas' confidence rose into another stratosphere. "At one point in the fight, I felt invincible," he would say. "I experienced a feeling I never had before."