This was the fight everyone had anticipated -- Tyson vs. Holyfield II.

They were calling it "The Sound and the Fury," the $100-million rematch between these titans. The first Holyfield-Tyson bout, eight months earlier, produced a shocking upset -- a knockout victory for Holyfield.

Now here we are, in July of 1997, and the rematch is drawing more attention than the first bout, with Tyson getting $30 million, Holyfield $35 million, and pay per view fees of $49.95.

Tyson, in his usual black trunks and shoes without socks, begins the bout more cautiously than the first fight with Holyfield last November 9, when Holyfield stunned Tyson in the 11th round of a one-sided beating. On this night, Tyson throws several long right-handed bombs, just as he did in the first bout against Holyfield, but this time, for some odd reason, he seldom uses his jab.

Midway through the opening round, Holyfield hammers Tyson with hooks and jabs, then rocks Tyson with a right uppercut and left hook that momentarily wobbles the former champ. Tyson is unable to unload his big overhand, but with only seconds left, he finally lands a vicious blow to Holyfield's ribs.

Seconds into Round 2, Holyfield leans into Tyson and accidentally head butts him, above his right eye, opening a gash. Referee Mills Lane immediately signals head butt, but he does not take a point away, infuriating Tyson and his corner. Tyson's frustration and anger grows as Holyfield smartly and craftily nullifies Tyson's power. Holyfield charges forward time after time, turning up the pressure as Tyson backs up and abandons the jab that his trainer, Richie Giachetti, had ordered him to use. 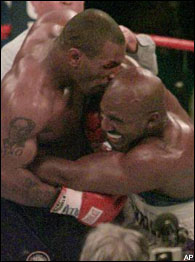 Holyfield wins the first two rounds on all three judges' scorecards. Tyson is clearly frustrated and irritated. As the third round is about to begin, Tyson storms out of his corner. But he is not wearing his mouthpiece. No one notices except Holyfield.

Holyfield points to Tyson's mouth and looks toward Lane, illustrating that his opponent does not have a mouthpiece. Lane orders Tyson back to his corner to get the mouthpiece. Tyson then shoots back out of his corner, immediately catching Holyfield with a solid right and then a ferocious combination. The crowd goes wild, chanting "Holyfield! Holyfield!" and then "Tyson! Tyson!"

Breathing heavily, Tyson stumbles back as Holyfield charges and nails him with a solid right to the ribcage. Tyson counters with two solid hooks, but neither makes the champion budge. Suddenly, with 40 seconds left in the round, the fight takes an ugly and ghastly turn: Tyson gets Holyfield in a clinch, rolls his head above Holyfield's shoulder, spits out his mouthpiece, and then in an inexplicable and gruesome move, crunches down hard with his teeth on Holyfield's right ear and bites off a chunk.

Everyone in the stadium is mortified, unable to grasp what they have just witnessed. As Tyson spits out the chunk of Holyfield's ear, a bewildered and perplexed Holyfield pushes Tyson away, then hops up and down in a frenzied pain, and spins around in a circle in stinging agony.

Lane abruptly stops the bout. As a mystified Holyfield, bleeding badly from the ear, turns his back to walk toward his corner, Tyson runs and attacks him from behind, startling the crowd. Tyson slams Holyfield in the back, and the champion falls into the ropes.

As Holyfield quickly turns and prepares to go after Tyson, Lane breaks in. "I was ready to tackle him, and throw him down," Holyfield would say later.

Holyfield stands in shock, a red line of blood running from his ear to his shoulder and down his back. He stares in disbelief and anger at Tyson. The fight is delayed for several minutes as Lane sternly lectures Tyson and penalizes him only with a two-point deduction. Meanwhile, as a physician examines Holyfield and determines he can continue to fight, Lane turns to Tyson and says, "One more like that and you're gone," referring to the bite.

Tyson would tell reporters later: "Holyfield butted me in the second round and then he butted me again. He looked right at me and came right into me. What am I supposed to do? I've got children to raise. He kept butting me. Holyfield is not the warrior he claims he is. He got a little nick on his ear. ... He didn't want to fight, regardless of what he did. Look at me."

The fight resumes. The crowd is now juiced up in a wild fury of emotion. Immediately, Holyfield hits Tyson with a solid right. The opponents fight into another clinch, then Tyson, shocking and amazingly, cranes his neck around again, finds Holyfield's left ear and bites it. This time, he rips an even bigger piece of Holyfield's ear.

Bedlam and chaos follow as Tyson tries to get at Holyfield in his corner. Tyson, in a wild rage, takes a swing at a police officer who had stormed the ring. Holyfield's trainer, Tommy Brooks, yells at Tyson, "You're a coward. You had Holyfield all to yourself in the ring, but now with 15 people behind you, you want to fight. You're a coward."

Tyson turns into a madman, trying to get at Holyfield and Brooks. The nastiness is contagious, spreading from the ring through the stands and outside into the Las Vegas night.

Back inside, public address announcer Jimmy Lennon Jr. reads the never-before-heard decision: "Referee Mills Lane has disqualified Mike Tyson for biting Evander Holyfield on both of his ears."

The MGM hotel lobby, and around the corner from the arena, is a war zone, with fights, gunfire and stampedes. As Tyson walks back to his locker room, he is showered with empty and half-empty cups of beer and soda by the angry crowd. Police drag rowdy people out of the stands. The boos rain down on Tyson.

As a fan tosses a full bottle of water in Tyson's direction, Tyson begins climbing over a temporary railing and up into the stands, making obscene gestures to the crowd and clawing his way up the side of a stairway before he is restrained and dragged to his locker room.

Holyfield is taken to Valley Hospital Medical Center, instead of a press conference, where he undergoes surgery by a plastic surgeon to repair his ear. Fortunately for Holyfield, a ring attendant shows up at his dressing room with almost an inch of his right ear wrapped in a latex glove.

Tyson, meanwhile, is immediately suspended, his purse withheld. His life, already a chaotic mess, shoots into another stratosphere of muddled confusion and radical wastefulness, another sad chapter his crazy life and times.