Cheaters come in various forms in baseball. Pitchers who throw spitballs or use sandpaper to create more movement on the ball. Teams hiding video cameras in obscure areas of the ballpark in order to steal signs from opposing teams. Corking a bat.

THE MOMENT
June 4, 2003, Wrigley Field, Chicago Cubs vs. Devil Rays. It's the bottom of the first inning and the first two Cubs reach base, bringing up beloved Sammy Sosa, the only player to hit 60 or more home runs three times.

Sosa, who joined the exclusive 500 home run club earlier in the season, is currently in the midst of a miserable slump, one of the worst of his career. He hasn't homered since May 1. His power numbers have dropped drastically since being hit in the helmet on April 20 by Salomon Torres of the Pirates. Shortly thereafter, Sosa had a toenail surgically removed, forcing him to go on the disabled list. 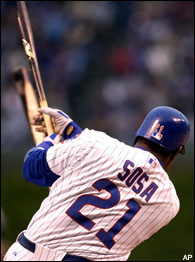 Activated just a few days earlier, Sosa is just 2-for-15 since coming off the DL. He had struck out five times in a game a few days earlier. With runners on second and third, Jeremi Gonzalez, working from the stretch, fires a pitch, low and away. Sosa uncoils, swings from his heels, connects with the ball. The bat shatters upon contact.

As Mark Grudzielanek scores from third on the broken-bat groundball out, umpire Tim McClelland spots something funky when he retrieves Sosa's bat. He looks closely at the piece of shattered wood and notices an odd material inside the bat.

"I turned the bat over and there was a half-dollar size piece of cork in the bat right about halfway down the barrel head," McClelland would later tell the media. McClelland huddles with the other umpires to examine the bat. "I wanted to make sure the crew knew it was cork and what the ruling would be," he would say.

Major League Baseball rule 6.06 (d) is very specific about tampering with bats: A hitter is declared out and immediately ejected if in the umpire's judgment, a bat "has been altered or tampered with in such a way to improve the distance factor or cause an unusual reaction on the baseball. This includes bats that are filled, flat-surfaced, nailed, hollowed, grooved or covered with a substance such as paraffin, wax, etc."

McClelland waves to Cubs manager Dusty Baker, asking him to join the umpire's conference. McClelland shows Baker the bat. Baker stares blankly at the lumber. McClelland tells Baker he has no choice: he must eject Sosa from the game, take the Cubs' run off the scoreboard and send Grudzielanek back to third. As this sequence takes place, Sosa stands in the dugout, motionless. The fans are stunned.

Word immediately shoots through Chicago and every other city in the nation: "Sammy Sosa was ejected in the first inning of tonight's game at Wrigley Field for using a corked bat."

Sosa doesn't shy away from the controversy. He steps right into the glow of the TV cameras and admits his guilt. But he says it was an honest mistake, that he grabbed the wrong bat. He admits the bat is his, but that he uses it for batting practice, occasionally, just to excite the fans with long and deep 450-foot blasts.

"I use that bat for batting practice," he tells the world. "It's something that I take the blame for. It's a mistake. I feel sorry."

Still, many see Sosa's excuse as lame and ridiculous. Sure, they acknowledged, it may be true that Sosa only used the corked bat in BP to excite fans with mammoth bombs. But the question is why would a player risk messing up his timing by using a corked 31-ounce bat before the game for BP and then switch to a 33-ounce model in the game?

All of Sosa's bats are confiscated by security personnel and turned over to Major League Baseball. Seventy-six bats are impounded. Each one is checked for cork by baseball officials the following day. All are found to be clean.

All five of Sosa's bats in the Hall of Fame are tested, including the one in which he hit his 500th home run earlier in the 2003 season, on April 4. The bats were checked with X-rays and CT scans. All the bats are found to be untainted.