New York City is buzzing on June 14, 1994, with thoughts of Madison Square Garden and Game 7 of the Stanley Cup Finals between the New York Rangers and Vancouver Canucks.

The Rangers haven't won the Cup in 54 years and the city is engulfed with Rangers' fever. Everywhere you look, there are people wearing Rangers' jerseys, people yelling "Go Rangers," signs blasting, "Win The Cup" and "Tonight's The Night."

"I've been in the game for 16 years, had already won five Cups," Rangers captain Mark Messier told reporters later in the day. "I thought I'd seen it all, but I'd never seen the kind of attention paid to this game."

THE MOMENT
Game time arrives. The city comes to a screeching halt. Madison Square Garden is louder than any arena you've ever been in. The game is tense and spirited, the best of what is already a memorable series. Fittingly and expectedly, it is Messier who leads the Rangers' charge toward the Cup. He was, after all, brought to New York three years earlier for this moment.

After winning five Cups with the Edmonton Oilers, Messier boldly accepted a difficult mission -- to lead the Rangers to the Stanley Cup title for the first time since 1940. He won the NHL MVP that first season in New York, but the Rangers floundered in the playoffs that season and the next.

But in the 1993-94 season, Messier leads the Rangers to the best record in the NHL, then playoff victories over the New York Islanders and Washington Capitals. Then, in the conference finals against the hated New Jersey Devils, he boldly guarantees a victory in Game 6 and backs it up with a hat trick to clinch the series.

But in the Cup Finals, the Rangers let a 3-games-to-1 lead slip away and are forced to confront the pressure of a Game 7. Fans and teammates look to Messier, their rock of leadership, their ace in the hole. 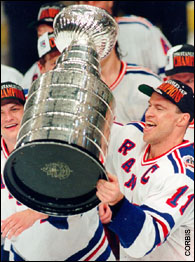 Messier sets up the Rangers' first goal at 11:02 of the first period. He carries the puck up the ice, past Canucks star Pavel Bure, along the right side. He holds the puck at the top of the right circle and then makes a sweet back-handed pass to Sergei Zubov, who holds the puck, then whips a pass over to Brian Leetch, who beats the sprawling Kirk McLean on the open side of the net.

The Rangers score again, and after Vancouver slices the deficit to 2-1, Messier comes through again. Early in the second period, when the puck is deflected in front of the Canucks' net, it's Messier who's there at the left post to tip it home for a 3-1 lead.

Vancouver closes to within a goal again, turning the game into a tense, fierce battle of will, guts and desire in the final period. With two minutes left, the crowd rises in joy and fear. They do not sit down again. During the final 90 seconds, the Rangers keep icing the puck, doing anything and everything to keep it out of their end, where goalie Mike Richter faces a powerful arsenal from six Canuck shooters.

"The clock didn't seem to move," Leetch would say. "You're out there for what seems like a minute and a half, and when you look up it's only been 20 seconds. You have that fear of the puck going in the net, but it's still the most exciting moment in your life."

During the final 60 seconds, the fans are on their feet; the arena is deafening. The atmosphere, the experience, takes on religious-like proportions as fans remain standing in a spine-tingling frenzy.

With 6.6 seconds left, the fans' roar shakes the Garden's pillars as Steve Larmer grabs the puck in the corner, with the Canucks swarming and attacking in their quest to win their first Cup. Larmer flicks the puck all the way down ice. The puck takes five seconds to cross the goal line at the other end, before the refs can call icing. Just 1.6 seconds show on the clock. There's one more faceoff left.

The Rangers' Craig MacTavish skates into the faceoff circle against Murray Craven, just to Richter's right for the final shining moment of a golden season. The puck is dropped. MacTavish reaches in quickly and yanks it back toward the boards as the scoreboard clock ticks down. Bure takes one final, desperate swipe at the puck, but the Rangers freeze the puck behind the net at the corner boards. The green light flashes as the buzzer sounds, and bedlam erupts in every corner of the sacred arena.

"We did it! We did it!" Messier screams as the Rangers mob each other. The roar from the crowd rises as the Stanley Cup emerges from the bowels of the arena and is carried out on the ice.

Messier's usual stone face is aglow in a joyous smile as he takes the shining silver chalice and cradles the 32-pound trophy high, then shakes it like he can't believe he actually has it in his grasp. Then he hoists it high over his head, sharing it with everyone, from rinkside to the rafters.

A fan high above rinkside, illustrating the impact of this victory for many Rangers fans, holds up a sign that reads, "Now I Can Die in Peace."