On July 31, 2003, Aaron Boone was traded to the New York Yankees to fix their hole at third base. Boone was OK down the stretch -- he hit .254 with six homers and 31 RBIs in 54 games -- but in the American League Championship Series against Boston, Boone hit the skids, falling into a miserable slump.

In the first six games of the series, he hit .125, with just two hits in 16 at-bats, and both hits were infield choppers. In Game 6, Boone looked particularly pathetic, going 0-for-4 with two strikeouts. He was benched for Game 7.

THE MOMENT
October 17, 2003, Yankee Stadium, 11th inning, Game 7. Boone had learned before the game that Enrique Wilson was going to start at third. For eight innings, he sat, wondering what in the world had happened to his hitting.

Just five outs away from losing the pennant, the Yankees rally from a 5-2 deficit to tie it in the eighth inning. During the rally, Wilson was lifted for pinch-hitter Ruben Sierra, and when Sierra was intentionally walked, Joe Torre called on Boone to pinch-run and take over third base.

As the game moves into the bottom of 11th inning, Boone is scheduled to lead off. The question is whether Torre will let him hit or pinch-hit for the slumping third baseman. 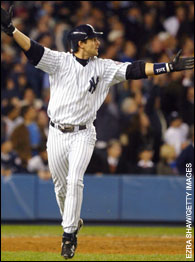 The Red Sox pitcher is Tim Wakefield, a knuckleballer who is having a marvelous series. So marvelous that if the Red Sox find a way to win this game, Wakefield is a shoo-in to win the series' Most Valuable Player.

Boone is hitless against Wakefield in the two games the Boston knuckleballer has pitched in the series. But Torre sticks with Boone.

"I don't particularly like facing Wakefield," Boone would say after the game. "I haven't squared up too many against him. It's like a crapshoot."

Boone walks to the plate with a plan: he thinks about taking a pitch, getting a good look at Wakefield's first pitch, getting his timing down, then hoping to put a one good swing on one good pitch. Yet he knows that Wakefield will be throwing a knuckleball, so he is caught in between his emotions: should I take or should I swing, knowing exactly what pitch is coming?

"All I wanted," Boone would say later, "was to get on base, to make contact."

There buzz in the stadium that builds to a loud roar as Boone gets into the box against Wakefield, the score still tied 5-5, with everyone knowing that one swing means the AL pennant and a trip to the World Series.

The crowd rises. Wakefield receives the sign from catcher Jason Varitek. He goes into his motion and delivers. The knuckleball floats and jiggles toward the plate, a spinning white pill against the evening sky. Boone readies himself. The pitch jiggles closer to Boone. He uncoils, then takes a vicious cut. The ball is drilled toward the left-field stands and as it soars through the New York sky, it's evident it's far enough to pull the curtain down on this remarkable series and slap the Red Sox and everyone else in New England one more time.

Yankee Stadium is instantly transformed into a New Year's celebration. The ball disappears into a wild sea of blue, Yankees jubilantly run onto the field, starting a mad dancing dash to home plate, tears fill Joe Torre's eyes, and the stadium is filled with the song ... "Start spreading the news ..."

As Wakefield trudges slowly toward into the stunned Red Sox dugout, where Pedro Martinez sits in a trance, Yankees reliever Marino Rivera races to the pitcher's mound, falls on it and hugs it like it a best friend he hasn't seen in years.

As the loudspeakers blare "I want to wake up in a city that doesn't sleep, and find I'm king of the hill, top of the heap, " Boone reaches home plate and disappears beneath a mass of teammates at home plate.

"You always emulate these moments in your backyard," Boone would say. "I still can't put the into words ... I'm floating ... Just to have had this opportunity ... It's humbling. This game humbles you all the time in good ways and bad ways. Lately, it's been humbling in a bad way. That's how it is."

In the blink of an eye, Boone has provided another legendary home run in Yankee lore, joining Chris Chambliss, who who hit a pennant-winning home run in the bottom of the ninth inning of the decisive game in the 1976 ALCS against the Kansas City Royals.

Soaked in champagne in the wild Yankees clubhouse, Boone pauses and says, "When I joined the Yankees, this is the kind of thing I wanted to be part of. The perfect ending."