They practiced the play three times a week, and always before game day, for more than 20 weeks, counting preseason, even though they knew the chances of using it during the game were slim.

Home Run Throwback is a play designed by Lowry that is slated to be used only when the Titans trail and expect a squib kick by the opponent. The time finally arrives: the Titans trail and the Bills are likely to try to eat up some of the clock with a squib kick. Lowry's play calls for the Titans to field the kick and get the ball to tight end Frank Wycheck, who is supposed to run upfield and pass back across the field to kick returner Derrick Mason.

But as luck would have it, Mason has a concussion, and his backup on Home Run Throwback, Anthony Dorsett, is out, too, with leg cramps. So the Titans have no alternative but to use wideout Kevin Dyson, who's never practiced the play before. 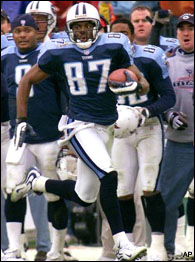 "They just called my name out of the blue," Dyson would tell the media after the game. "As we were running on the field, they were trying to explain the gist of the play to me."

As the Bills celebrate on the sidelines, thinking they've won the game and have advanced to the next round of the AFC playoffs, Dyson starts running out to the field with Lowry by his side, explaining the play's formation. As Dyson lines up near the left sideline, teammate Lorenzo Neal also yells instructions on where to set up and how the play is supposed to work. "Remember," Neal yells, "stay a few yards behind Frank [Wycheck]."

Christie kicks off -- but it's not the squib kick the Titans expect. Instead, it's a high kick. But the kick actually makes the play easier for the Titans to run Home Run Throwback. Neal catches the ball in the air at the Tennessee 25 and hands it off to Wycheck.

Wycheck, who had thrown a 61-yard touchdown pass earlier in the season, runs forward a little, and then spins and throws the ball across the field to Dyson, who is on the left side of the field, about even with Wycheck.

The ball comes in low, but Dyson catches it, just above the grass, and takes off down the left sideline with a fleet of blockers in front of him.

"Once I caught it, I thought, 'Get a touchdown or get in good position for a field goal,'" Dyson would say later to the media.

With the Bills in total disarray, Dyson sees only Titans and daylight in front of him. "I was real excited when I saw there was nobody in front of me," he would say later with a laugh.

Everyone inside the stadium is amazed as Dyson scampers untouched toward the end zone with the clock ticking down. As Wycheck watches Dyson take off, he's saying to himself, "Get out of bounds! Get out of bounds before the clock runs out so we can kick a field goal!"

But then he sees how fast Dyson is moving. "He was, like, flying," Wycheck would say.

The crowd goes absolutely wild as Dyson closes in on the end zone and jubilantly enters it, untouched, with three seconds left on the clock for a dazzling 75-yard TD, giving the Titans a dramatic 22-16 victory, marking the first time in playoff history that a kickoff return for a touchdown in the final minute of play had ever decided a game.

As the Titans celebrate and the Bills stand motionless all over the field, the referees huddle to talk about what has just transpired. The expectation, especially among those watching on television, is that the refs are going to rule that Wycheck threw an illegal forward pass. Up in the press box, Bills general manager John Butler tells reporters, "Wycheck threw the ball behind the line and it was caught over the line. That's an illegal forward pass."

Referee Phil Luckett runs to the sideline to study the play at the replay booth. Players and coaches from both teams stand and pace on the field and sidelines, waiting for a decision. The clock reads 0:03. With a cover draped over his head, Luckett stares at the replay monitor for an eternity. He is surrounded by a crowd from both benches and a flock of photographers, journalists and officials.

In the press box, people watch TV replays, which are inconclusive. On live television, Wycheck appeared to be behind Dyson. But in fact the ball itself traveled nearly straight across the field, parallel to the yard line. It's difficult to tell with precision if Dyson caught the ball behind Wycheck, even with Wycheck or in front of Wycheck.

Back on the field, players from both teams talk back and forth. "It's a forward pass, nice game," one of the Bills tells Wycheck.

Finally, Luckett emerges from underneath the cover and runs out to the field.

"The ruling on the field stands. After reviewing the play on the field, it was a lateral," he announces.

Titans fans celebrate all over again. Several Bills slam their helmets into the turf.

"The line judge's initial ruling was that it was not a forward pass," Luckett would later tell the media. "Taking it from where the pass left the passer's hand right on that 25-yard line, the receiver catches it right there on that yard line." The official wording from the NFL rule book is this: "A runner may pass the ball backward at any time. A pass parallel to the line is a backward pass."

Bills fans, meanwhile, are enraged -- at the refs and at Bills coach Wade Phillips. They're angry at Phillips for not calling a squib kick or a deep kick to the goal line and for saying he didn't want to put the ball in the hands of the Titans' best return men when Mason, Tennessee's usual kick returner, was on the bench, woozy from a slight concussion suffered on a third-quarter punt return.

As the Bills and their fans moan about their coach, the refs and the league office, the Titans and their fans party long into the night, celebrating the play that would become known as the Music City Miracle.