It was the last time Cal Ripken Jr. would play in the All-Star Game. After a wonderful 20-year career, Ripken, the ultimate Iron Man who did what no one thought possible -- eclipse Lou Gehrig's 2,131 consecutive-games record -- was retiring after the 2001 season.

He wasn't having that memorable of a season, but when the votes were tallied for the game at Seattle's Safeco Field, the sentimentality was overwhelming, and Ripken was a landslide winner to start at third base.

He came to this All-Star Game with his eyes "a little wider," as he put it, "to soak it all in." He found it difficult to shake the goose bumps. Very unlike Ripken.

The game was not only a celebration of Ripken and his career, but also of Tony Gwynn's, who was also retiring at season's end after his phenomenal career with the San Diego Padres. The evening, however, turned into Cal Ripken Night.

When the American League All-Stars took the field, Ripken raced to third and Alex Rodriguez went to shortstop, where Ripken had played for most of his career. Suddenly, Rodriguez pointed to the AL dugout, where manager Joe Torre was motioning for Ripken to move to his left. So Ripken moved a couple steps to his left. But Torre kept motioning for him to move over more -- to shortstop.

The gesture blew away the humble and reserved Ripken. Turns out Rodriguez had called Torre the previous week. He had left a message for Torre to call him. At first, Torre thought, "Oh no, he's going to tell me he can't play, that he's hurt." When Torre reached Rodriguez, the Rangers' shortstop told him his "Ripken Plan." Torre's response? "It's dynamite." Amazingly, everyone knew about the plan, except for Ripken. "It came off," Torre would say, "very well."

So would Ripken's first at-bat in the third inning against Chan Ho Park of the Dodgers.

THE MOMENT
As Ripken begins his stroll to home plate, the theme from "The Natural" is playing -- appropriately -- and the crowd of 51,223 fans begin to rise slowly and applaud.

The applause turns into a roar, a tidal wave of love, affection and appreciation. The noise fills up Safeco Field so fast and is so loud that Ripken has no choice but to step out of the batter's box and acknowledge the outpouring of emotion. 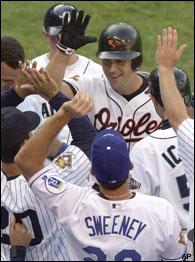 "I wanted to acknowledge them quickly because I didn't want the game to be delayed because of it," he would say later. The ovation continues as Park, pitching in his first All-Star Game, twirls and fires his first pitch.

Ripken, charged up to a level he seldom ever experienced before, takes a vicious cut and meets the ball squarely. It soars out to left field like a bolt of lightening.

The ball travels on a rope and just clears the left-field fence. As the ball disappears, and Ripken begins to sprint around first base, the crowd and the players in the AL dugout explode with joy and emotion.

Ripken had done it again. It is just like the awe-inspiring night in Camden Yards when he homered in the same game he tied Gehrig's record, and then homered again the next night, when he broke Gehrig's record.

Ripken would later say he felt as if he was given "a shot of adrenaline." He couldn't recall ever being so excited at the plate. "I was a little worried with the shadows, and when I went up there, I said to myself, 'God, it's hard to see. Let me just keep things short and put the ball in play.'"

Even the National League players are ecstatic after the homer. Chipper Jones of the Braves and Rich Aurilia of the Giants clap into their gloves as Ripken sprints around the bases.

"I felt like I was flying," he would say. Ivan Rodriguez is the first to greet Ripken as he crosses the plate amidst the roar of the crown. As he reaches the dugout, he is met by an elated A-Rod, and then is then mobbed by all the AL players. They hug him, high-five him and deliver slaps on the back.

"One of the great all-time moments," Torre now says.

"As far as special moments go, it doesn't get any better than that," Gwynn said later.

"That's the kind of magic that Cal has brought to the field for 20 years," Arizona pitcher Randy Johnson would say.

The home run made Ripken the oldest player (40 years, 10 months, 16 days) to go yard in All-Star history, eclipsing the old record set by Stan Musial, who did it 1960 at the age of 39. Fittingly, Ripken is named the game's MVP, making him the first American Leaguer to ever win the award twice, a perfect finishing touch to a perfect evening.