The first sign of trouble came December 9, 1989, in Santa Barbara, California. Six minutes into the second half, Hank Gathers, the All-American forward for Loyola Marymount, drove to the basket and was fouled. When he went to the foul line, he felt an unusual sensation. His heart was pounding faster than he had ever noticed. He bounced the ball then launched a shot. He missed. Then, he collapsed to the floor.

Coaches and the school's medical personnel immediately rushed to Gathers' side. Within seconds, he rose to his feet and walked off the court. Yet something was wrong. Drastically wrong.

He was later diagnosed as having an abnormal heartbeat. He was petrified. All he ever dreamed of was playing in the NBA. Now he saw that vision exploding before his eyes. He planned on being a lottery pick in the NBA draft, a virtual shoo-in considering he was the nation's leading scorer and rebounder as a junior, only the second time in NCAA history that had been accomplished, and was again among the leaders as a senior. But this revelation of a heart problem was a serious blow to Gathers and his future.

He was treated with Inderal, one of a class of beta blocker drugs that inhibits the effects of adrenaline and smoothes the hearts rhythms. But Gathers detested the drug. He agonized over having to take it. The drug made him sluggish, moody. His game suffered. He was unable to run the court without getting tired. His shot was off. He'd get woozy at times. He'd sleep longer.

Gathers continually complained to his coaches and doctors about the drug, that the dosage had to be reduced. They said no. So gradually, Gathers began cutting down on the dosage, and began feeling much better. He also began skipping some of the required testing. He was playing a risky game.

THE MOMENT
On the morning of March 4, 1990, Gathers awakes with excitement. LMU is on its way to the West Coast Conference tournament championship and a NCAA tournament berth. He arrives at Gersten Pavilion at 3:30 p.m. Game time is 5 p.m.

He begins his pregame regimen by jogging around the track outside the basketball arena. The jog quickly turns into a sprint as he circles the track three times.

Game time arrives. Gathers walks onto the court with his best friend, Bo Kimble, LMU's other brilliant player. Gathers wins the game's opening tip and LMU is off and running, building a huge lead over outmatched Portland State.

Gathers runs the break in LMU's fast-paced attack and takes a long lob pass from Terrell Lowery. He grabs the ball in mid-air and slams it through the hoop. The crowd rises to its feet in mad hysteria. It's the "Hank and Bo Show" at its finest. Gathers is running full speed, dazzling the crowd by scoring eight points with ease in the game's opening minutes. 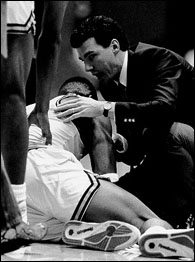 Standing near midcourt, Gathers gives Kimble a high-five, then gets in position as LMU goes into a full-court press. There is 13:34 left in the first half and LMU leads 25-13. Suddenly, Gathers falls to the court. The crowd gasps. He tries to get up, but slumps back to the floor, unable to muster enough strength.

Portland's Josh Lowery, standing over Gathers, extends his hand, attempting to help him up. But Gathers can't acknowledge it. LMU trainer Chip Schaefer flies off the bench. When he arrives, Gathers' body starts to go into convulsions.

Carol Livingston, Gathers' aunt, arrives next, followed by Dr. Benjamin Schaeffer, an orthopedist, and then attending team physician Dr. Dan Hyslop. Seconds later, they're joined by Gathers' mother, Lucille, and his brother, Derrick. Dr. Terrance Peabody, the brother of Loyola player Tom Peabody, rushes out of the stands and to the crowd gathering at midcourt.

Crouching on her hands and knees, Livingston shouts, "Somebody do something! Somebody please do something!" Gathers is lying on his back. He has a pulse, but he is unable to comprehend what is happening. He is removed from the court on a stretcher, and as soon as the medical staff gets outside the gym door, they hook him up to the school's defibrillator, which was purchased a few months earlier specifically for Gathers, a devise that is actually supposed to be courtside in case he collapses.

When the defibrillator is hooked up to Gathers, it indicates he has lost his pulse. An electrical shock is necessary. Three shocks are given to Gathers' lifeless body. He lifts his head. He takes two deep breaths. Then his head drops back to the stretcher.

Rescue Ambulance 5 of the Los Angeles Fire Dept. arrives at 5:21 p.m., only seven minutes after Gathers first collapsed. Medics continue to use a defibrillator and administer CPR. At 5:34, the rescue vehicle leaves Gersten Pavilion and speeds off to Daniel Freeman Marina Hospital, two miles away.

Gathers arrives at the hospital at 5:38. Emergency personnel work frantically on him for more than an hour. Finally, two doctors emerge from the emergency room. They stonily walk toward Gathers' family and friends. They stop. The situation is clear. Suddenly, a woman's shriek pierces the air. Livingston bursts through the emergency room doors, screaming, "Oh my God. He's gone. He's gone."

LMU teammates Tony Walker and Chris Knight, still dressed in their uniforms, begin weeping. Walker puts his head on the shoulder of assistant coach Brian Woods. The life of the self-proclaimed strongest man in America, a future NBA star, expires. Far too prematurely.